Telling the bees is a traditional European custom, in which bees would be told of important events in their keeper's lives, such as births, marriages, or departures and returns ... If the custom was omitted or forgotten and the bees were not 'put into mourning' then it was believed a penalty would be paid, such as the bees might leave their hive, stop producing honey, or die.

A message from a neighbour and friend in Greece:


Hello Simon, I see you are back home. What is going on with the referendum? Was the whole thing an accident? Though I cannot believe that the most instinctive 'school' is pulled in such uncomfortable situations. Do you see Cameron acting as Chamberlain did? In that case 1937-1939 period is being repeated? Sevastianos Metallinos (President of Ano Korakiana's Agricultural Co-operative Αγροτικού μας Συνεταιρισμού

Home? We have two 'homes'! Dear S. Lovely to hear from you. No-one can know if history is repeating itself, but its shadow seems stronger, its echoes louder, than before 23rd June. Yes! You could say that the Referendum was an 'accident'. To resolve differences within his Party, Cameron, included a promise in the Conservative Manifesto for our May 2015 General Election - a pledge to hold a Referendum on the UK staying in or leaving the EU. He did not think the Conservatives would win last year’s election. When he became PM with a clear majority his new government was committed to a promise he had not expected to have to deliver. I guess that beloved Greece is too full of its own woes to care much about what we’ve done to ourselves in Britain as a result of this vote. I agree with the recent words of Yanis Varoufakis who had wanted the UK to remain in the EU. “OUT won because the EU establishment have made it impossible, through their anti-democratic reign (not to mention the asphyxiation of weaker countries like Greece), for the people of Britain to imagine a democratic EU.” My family voted to remain, except my daughter and son-in-law. We would never let politics divide our family, and although I do not think for a second that they voted from fear, there's no question that too many did; fear and anger. Too many jumped at the opportunity to give the ‘ruling elite’ a kick in the pants, and 'get their country back'…

Their vote against ‘foreigners’ carried the day for the OUT vote. Our country is full of angry frightened people. Nor will Brexit shield us against many other angry people across Europe. There lies your comparison with the 1930s. The UK vote threatens the EU project as a whole - beset by right wing nationalist movements. I’m sure you know the famous Chinese curse “May you live in interesting times”. We are back in Ano Korakiana in late August. Meantime I am growing lots of fresh fruit and vegetables on my allotment, despite very wet weather and a plethora of slugs and snails. My bees are buzzing. I have much to occupy my life.

*...there is no ship for you, there is no road.
As you have ruined your life here
in this little corner, you have destroyed it in the whole world. (Constantine P. Cavafy 1910)

**...The Laestrygonians and the Cyclopes, the raging Poseidon do not fear: You'll never find the likes of them on your way, if lofty be your thoughts, if rare emotion touches your spirit and your body. Cavafy 1911

From Sevastianos: Thank you. My regards to Linda
Me: I hope you do not now regard us as foreigners (:))
S: Of course you are foreigners. It is a matter of culture after all. We, proud Greeks, are fond of Sakis Rouvas, Alexis, NO and Olympiaco's morality. Kavafis, et al is for, nationwise, diversified orphans...At least lets enjoy it....THE IRISH coast guard has today issued a nationwide warning for the East Coast as hundreds of thousands of British refugees risk their lives to cross the Irish sea in an attempt to flee the impoverished and unstable nation.....


Owen Jones in The Guardian yesterday - an extract:


'...Many of the nearly half of the British people who voted remain now feel scared and angry, ready to lash out at their fellow citizens. But this will make things worse. Many of the leavers already felt marginalised, ignored and hated. The contempt – and sometimes snobbery – now being shown about leavers on social media was already felt by these communities, and contributed to this verdict. Millions of Britons feel that a metropolitan elite rules the roost which not only doesn’t understand their values and lives, but actively hates them. If Britain is to have a future, this escalating culture war has to be stopped. The people of Britain have spoken. That is democracy, and we now have to make the country’s verdict work.'

Comment from my friend Christopher Grossmith - living in Nepi, 50 kilometres north of Rome:


I tend to agree, we have to go for it now. The Great British Public may have put their foot in it 'Churchill with the Dardanelles' but we will now do something brilliant just to prove we were right. So far no one has spat at me in Italy..

*** ***
I've been taking part, via my membership of the 1000 Elders Group, volunteering to be guinea pigs, for the Queen Elizabeth Hospital's research into healthy ageing - on this occasion a study of 'the acute effects of sitting time on physiological and psychological function in older adults'


What is the purpose of the study? Although there is evidence supporting the longer term health problems of prolonged bouts of sedentary behaviour (sitting) in older people, we do not know very much about the effects of shorter ‘acute’ sitting bouts on our minds (mood, thinking and memory) and bodies (muscle power, mobility, joint pain). Interestingly the current UK physical activity guidelines state that “while there is sufficient evidence to support a recommendation to reduce sedentary behaviour in older adults, it is not currently possible to suggest a specific time limit”. The aims of this study therefore are to characterise sitting time in older people in terms of acute physiological and psychological effects, as well as identify the main effects that older people perceive as being important after periods of sitting....You have been chosen because you are 70 years of age or over and are able to walk either with or without the use of walking aids.


Dear Simon. I hope you are well. This is just a reminder for your next visit this coming Friday at 11:30am. I will meet you in the reception of the NIHR Wellcome Trust Clinical Research Facility at the Old Queen Elizabeth Hospital (Heritage Building). Please remember to wear comfortable clothing and sensible shoes. Also remember to bring something warm and plenty of reading material to fill your sitting time. It will be your 2 hour sit this week so we should be finished by 5pm. Any problems or questions then please just let me know. Kind Regards, Emma

During the first phase of three sessions - following consent and familiarisation - I did psychological, cognitive and physical tests before and after sitting still for two hours. Next week I'll sit for four hours. I'm allowed to read and use the guest WiFi but not to receive or make phone calls. My main recollection later - I cycled home along the canal as usual - was the observation of the attending nurse, who took samples of my blood and saliva and measured my blood pressure.


"Your blood pressure's a little high"
"Seriously"
She showed me her readings; in the hypertension range.
"That's odd. That's never been a problem for me"
"Well I need to point it out. Check with your GP"
"Gosh Emma, do you think I'm stressed by the Referendum result?"
"Could be." she said "We'll see how your blood pressure looks on your next visit next week" 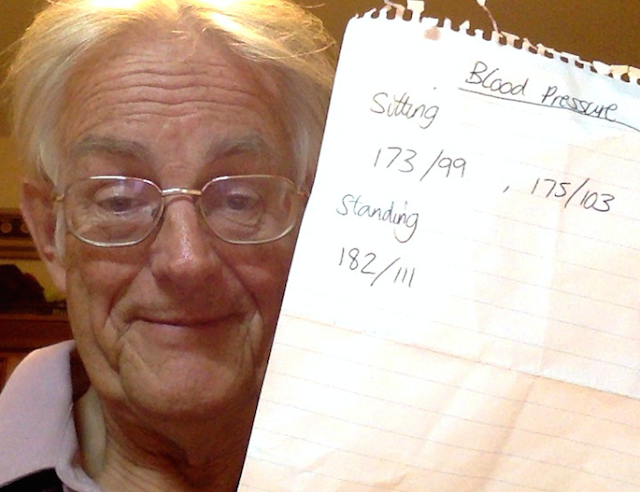 Talking to the bees, I recognise feelings that compare with previous personal ordeals - bereavement, and long long ago, divorce and separation. They are preambles to bracing myself for some major and, at the time, regretted change in circumstances.
I'm well aware the rifts in the population of this country have long been there and worsening, but the EU referendum has given voice, expression to and significant legitimacy to stark differences. On the 16 bus into and out of the city I am often the only white man, the only old white man. In such frequent company I feel safe, at home, relaxed. I know a sample of such fellow passengers could include as much of a moral mix as on a bus in any other part of this country, but watching some of the good old boys interviewed in all white pubs and streets of another England I feel distanced, even prejudiced, god forgive me. So when, chatting to the long known and familiar owner of our local Asian corner shop, I was almost relieved to hear, from Ahmed's mouth, views about how 'immigration' had got 'out of hand' similar to those I was hearing on TV from rejoicing white Brexiteers in places where I would feel foreign in my own country.

From a friend, and co-writer:


Yes lots of echoes with my thoughts
We have unleashed something repressed because we had a referendum we should never have had. The prosperity we both enjoy is not shared, inequality in the last 30 years has got worse, we have separate not integrated communities and so no wonder the dynamics of in/out groups, and the hatred of the other,  mobilised voters.  Many people left their homes to vote not knowing what they would do in the ballot box. They knew they were under-informed and were angry to have a responsibility that should have stayed in parliament. People were let down by politicians and yes I am angry with Boris and Gove but look how amazed people were when they found out how wonderful Jo Cox was - by contrast some politicians have spent a long time making fools of the electorate over expenses and politicking for personal gain. This fury and protest vote did not materialise in two months. I do worry that like the 1930s this fragility sends people right or left for certainty and our middle is lost - did the Lib Dems get any air time during this campaign? Who decided they were no longer relevant? So even the media had a role to play.  They focused on personalities as good TV.
I envy future historians - in a hundred years time this whole process will be the subject of a thousand erudite papers. For now I see the issues we are already facing and feel in despair.