On the edge of success

A picture speeded up; summer’s exudation of greenery – leaves, tendrils, stalks, flowers, fruit, pods, tubers and all I define as weeds – burgeoning, profuse, like descriptions of far greater heat in Lampedusa's novel of Sicily which I read long long ago - the sun like a lion, the oestrus mares in the palace stables. It makes winter scenery unimaginable – as in winter, this summer abundance is remote. Yet I’m not content. 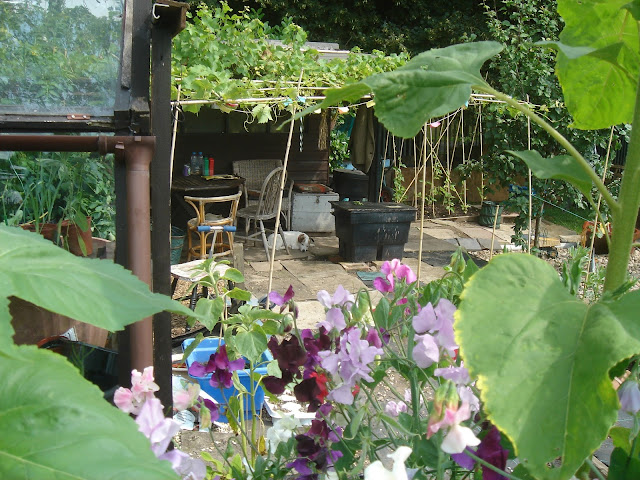 The pleasure of my allotment is being shared with a snails, slugs and caterpillars. Pigeons and magpies drop in to enjoy the feast. On a Facebook site devoted to allotments the administrator has been asked to censor the next member who posts a clip of killing slugs;


Yet again certain people still find great pleasure in posting slug and snail killing pictures. You should be band!!!! You know who you are and so do we. There is no need for it. Personally I don't want see It!! And sure that most other people don't want to either. Thought we had moved on!!! Admin need to step in.

We’ve had human thieves on Victoria Jubilee. They clambered over the site’s metal railings at night, looking for power tools. Nothing from us, since we have none. They borrowed a hammer of mine to break into a neighbour’s shed, leaving it on the ground outside. No-one accuses me. They broke into our shed. I’ve repaired their damage. Oliver helped. Winnie restored order inside; tidying their strewing. The police have other priorities. It's mostly forgotten already. 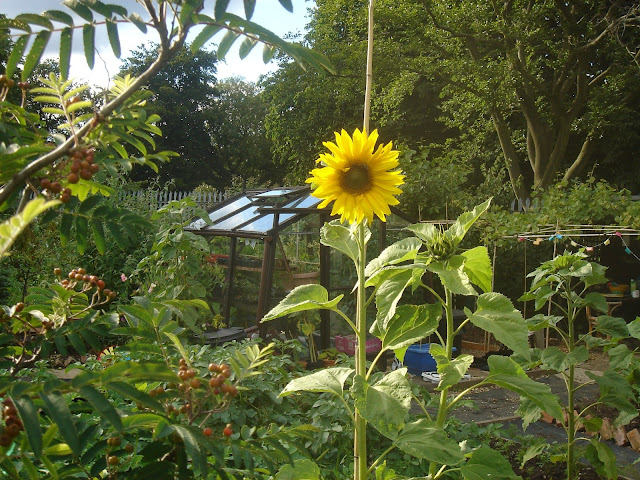 Instead of just rejoicing inwardly at the progress I’ve made, learning about working an allotment, slowly but steadily transforming unpromising boulder clay, I and other plot-holders inherited in 2010, into something like fertile loam, laboriously eliminating vestiges of the couch grass that invaded the 200 square metre plot, teasing out its nutrient leaching rhizomes, spreading and pegging weed suppressing textile on a grid of paths to make it easy to work on 24 separate beds without standing on working soil, erecting a shed, adding a veranda and extra bamboo supports for a hardy fertile vine, putting up a second hand wood frame greenhouse, designing a large fruit cage that stands up to gales, laying out alternating compost bays, and getting the bees back in abundance, but as Winnie observes now and then “You’re not happy, Simon!” 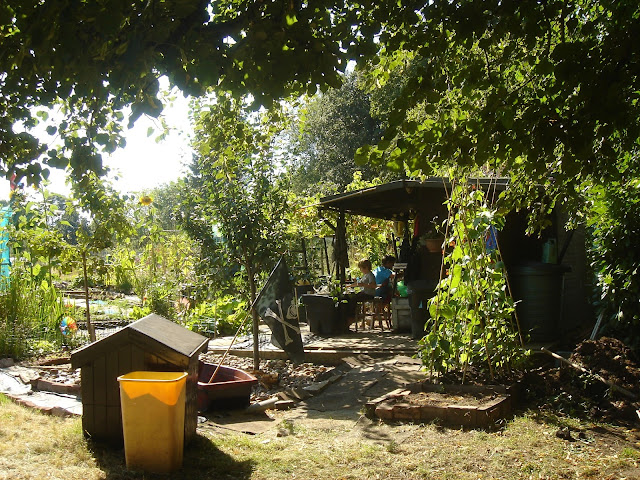 I’m overwhelmed by how much I don’t know, having learned from late experience, and reading, that this little plot is as unfathomable as the universe. It’s the site of a universe.
“Did you know” said my friend Ziggi who works an allotment in London “There are as many micro-organisms in one spoon of soil as people on earth?” 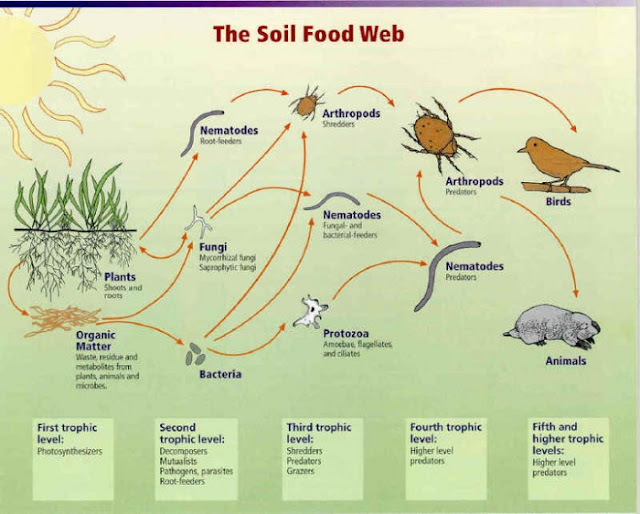 How on earth – literally – do I gauge what plants need? What different plants need?
I’ve arrived at a grasp of Ph values in the earth – even bought litmus paper - but I’m stumped when it comes to reckoning how plants and weather, along with chemical, physical, organic composition makes change in the soil through the seasons. Having invested in several tons of black gold two years ago, are parts of the plot too rich now? Some cultivators start again every year, investing in sacks of laboratory collected compost and top soil. I want to know how to maintain the soil’s equilibrium, to keep it working, with minimal recourse to garden centres and internet products pandering to my anxieties like cosmetics to their consumers.
As it is, I am almost convinced now that the site's original boulder clay - described, in a geological survey, as 'natural sandy clay with pebbles', is slowly reasserting itself

- wormless, cloggy in the wet and tending to produce fist-sized hardened lumps in the dry. Difficult to fork, impossible to spade. I had hoped the soil, treated with compost, especially black gold, some manure and wood chip mulch, would stay as good as it's been the last two years, but I don't believe this is the case. I shall now consider investing in more 'black gold' and even manure if I can get it from a reliable source. 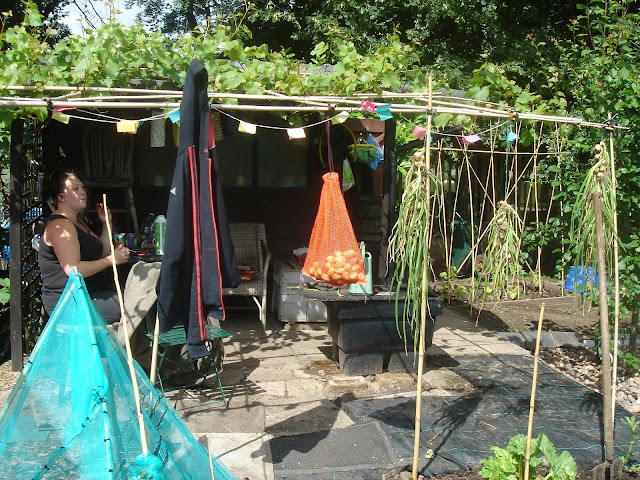 “Simon! Have faith” urges Winnie
“Yes but look what the birds and slugs have done to the Brussels sprouts that I hoped to get right for Christmas this year. The cauliflowers have bolted again. 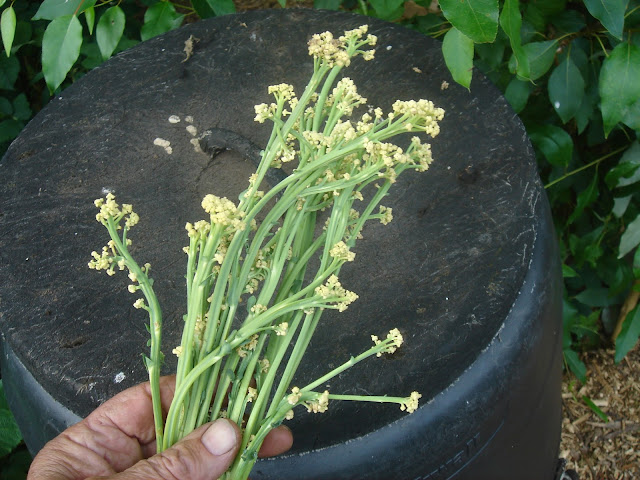 The same’s going to happen to the cabbage. See how all the cherries on both the cherry trees have been taken by birds. The plum and the pear yet again, haven’t even blossomed.”
My friend Ziggi reminds me “Nature lacks uniformity. For three years in a row your tomatoes come in abundance. Then they don’t. It happens.”
But as if this unpredictability, this indeterminacy, weren’t a vexation there’s another challenge. Growing crops and bringing them home when they are needed;... 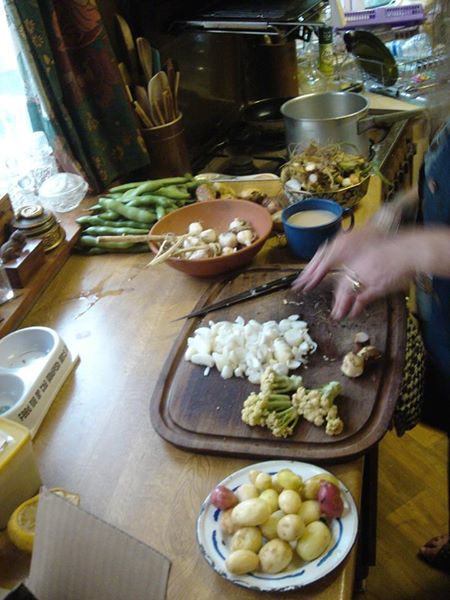 ... when Lin’s prepared to cook them for supper. She can't be doing with gluts.
“There’s only so much you can parboil and store in the freezer.”
She doesn’t do chutney and jam - not right now with the time given to caring for her mum. There’s a proportion I can give away – to Amy, Richard; to Jo and John, friends and neighbours.

“You need to grow things in succession” says Lin; this. while I’m still celebrating the abundance of a particular crop.
“What do you expect me to do with this lot?”
Potatoes and onions tilled on Plot 14 lie in the veg cupboard beside stock Lin's bought from Morrison’s or Lidl; my scruffy vegetables, shedding earth, sitting gawkily beside unflawed produce from over the till. The other day Oliver discovered and harvested a large aubergine...
...His sunflowers have been a success. Winnie's Dennis also grew sunflowers on the plot. When, as requested, he potted up one of these and brought it in to his school, his was so much taller than the other childrens', one small girl cried and Winnie whispered to her son not to show pride.
21st July: I was asked on FB yesterday 'do you follow much of a permaculture approach?'

I strive to understand the term permaculture on a 200 square metre plot. Its far-reaching philosophy and practice, such as I have picked up, makes plot 14 an impossible site on which to observe what approaches the new 'religion' [Google gives me 7,350,000 hits on the word in 0.41 seconds] that long ago my wise stepfather mused would one day attract the world. In permaculture terms I'm 'pre-scientific' - in the cargo cult stage, like those bewildered indigenous peoples, going slightly mad, on first encountering the technologies and unspoken values, of industrial populations. When an apple falls on my head - speaking hypothetically - I'm inclined to curse and rub my head. It takes a genius to be so rudely struck, and, amid the shock and pain, think 'gravity!'
It's true I've divorced my car. I cycle and walk - as much as possible - relying on Lin's car for emergency use. I do not use - since they are anyway forbidden on city plots - Bayer sourced herbicides or insecticides. I strive to compost and recycle amid the detritus of a consuming economy that allows me my cheap flights across Europe and beyond...I strive to understand what gardening interventions are workable in a medium of far greater complexity than I'd grasped when I first worked to prepare my plot with azada and fork, seeing the ground and what grew in it as hostile, understanding as never before the Biblical curse on Adam and Eve '“In the sweat of thy face shalt thou eat bread, till thou return unto the ground; for out of it wast thou taken: for dust thou art, and unto dust shalt thou return.” My family - the dearest to me in the world - are thoroughly embedded in the economic life of the present, only some of whose habits and attitudes, chime with the new life that is at the heart of a permacultural way of life. The only book that has ever worked for me - as a route into making sense of the earth - was written under war time conditions in 1945, and explains that environmentally sensible gardening is something that someone like me can do, since I'm not under the pressures placed on someone who must grow vegetables for a living - Gardener's Earth by Stanley Whitehead. I'm ever grateful for directions - further directions - but I suspect they are like the old Irish joke, where a local explains a route in great detail to a puzzled traveller only to end up saying, when sure they've grasped the directions, says "You don't go that way". I've come too far 'that way' to be very pleased about starting again 'the right way'. I'd almost rather keep banging my head against the wall - 'kicking against the pricks'. I approach my gardening almost as a penance and a therapy rather than as a seriously thoughtful steward of the land - which would perhaps make me a permaculturist. Your question is a good one.

Digging the plot in 2012. Intended as a 'before' clip.
Posted by sibadd