My brother George Pericles B sent me this cartoon on Facebook. Nancy Katsalis and Aleko Damaskinos sent me translations of the old Greek. George thought the bemedalled beribboned figure on the right represented Germany.
"Nothing changes, eh?" Not quite so. I think it's Russia.

I've been told this. I've read it, over and over; that Modern Greece, founded in 1828, was "born in debt". Yet most debates, interviews, editorials and op-eds I've read and heard and watched in recent years seem informed only by events of the 15 years since Greece joined the eurozone, rather than by those of the preceding 127 years.

In 1893 - date of the cartoon - the government of Charilaos Trikoupis declared bankruptcy. In return for debt relief, partial control was imposed by Greece's creditors - France, the Netherlands, Russia and Britain; all eschewing interference in the cat's cradle of Greece's internal finances. The government, over half of whose revenue, in 1893, went to service loans, was, as everyone knows, beset by clientelism - a complicated and deeply embedded part of Greek society....


Heinz Richter in The Globalist, June 2015: Unless one understands the history and the manifold ways in which the clientelistic system has metastasized, one has no chance of improving Greece’s prospects. Alas, most Europeans do not understand the phenomenon of clientelism and react in a peculiar way – such as the oft-made claim of 'lazy' Greeks.
Come to think of it, inside the EU, it is only the Austrians who – due to their past as a Balkan power – have some understanding of what’s really going on inside Greece’s structures. The other EU nations simply project European political ideas and ethical principles onto Greece and the other Balkan countries. They lack the understanding that these ideas and principles - noble and/or commonsensical as they sound - are alien to the society and the political culture of Greece.

After the national bankruptcy of 1893 - Greece's third - fruitless negotiations continued for years. In the cartoon the sack born by Hellas bears the words:


The compromise to save the nation - 99% with an eternal monopoly under foreign control of markets in tobacco, raisins, bread, wine, meat, olive oil.

and on the basket:


From the beginning, our state had no other choice than to live on credit. We were born in debt.

A wise writer, Athina Rachel Tsangari, in the Greek film Attenberg – which Lin and I liked a lot, watching it twice in as many weeks – says, through the mouth of one of its main characters, the architect Spiro, as he gazes over an ekistical Doxiades settlement laid out in Euboea, muttering to his daughter... 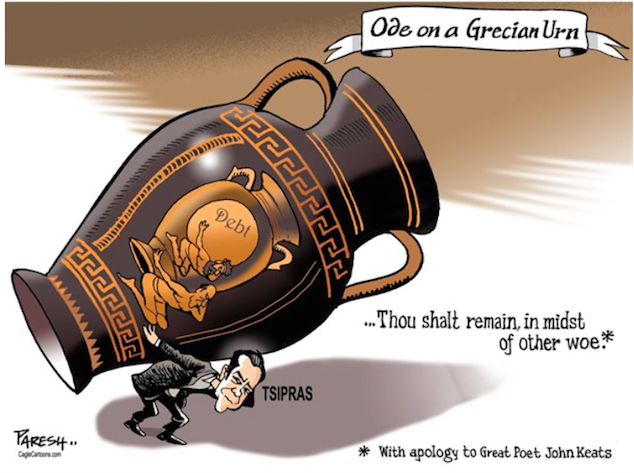 Half the time Greece has been a nation it has been in default - five times since 1800 - in 1826 (prior to independent in 1829), in 1843, 1860, 1893, 1932 and now.
The first default was on the loans that financing the independence movement. Much of that money went into the pockets of middleman between Greece and London where the loan was floated. The 1843 default arose from spending an international loan raised in 1832. In 1860 British and French forces occupied Piraeus to enforce repayment of the 1843 loan, causing a default that went on being negotiated until 1878. In 1893 Greece was bailed out under strict conditions imposed by an International Financial Control Commission also called the International Committee for Greek Debt Management...


From April 1898 the International Financial Control Commission (IFCC) was established in Athens; ...initially termed International Control Commission, but despite the change of name it was known as 'Control'. The commission consisted of six members, representatives of the Great Powers (now including an expansionist Germany)...revenues from the monopoly of salt, oil, matches, decks (sic), cigarette paper, tobacco, paper stamps and the tariffs of the port of Piraeus passed under its control. These and other revenues, if the need arose, were disposed of to serve the country's loan obligations, while the Commission had the capacity to intervene in various sectors of the civil services in order to ensure the sufficient and, in time, payment of economic obligations to creditors...

In trying to understand what's happening in Greece I have to know more history. The present is always confusing - the experience of an intelligent ant in the middle of a winding human footpath. Rise above the grass and gravel to make out the path - its scale and direction - thing become clearer. Grasping this picture of Greece - born in debt - and I'm clearer why Alexis Tsipras hasn't resigned, any more than did other Hellenic PM's, after declaring defeat, default and bankruptcy. I realise too that I've so little understanding of the different positions and trajectories of the EU leaders who stand together in opposing Greece and overwhelming SYRIZA, the 'big idea' of this quite new Coalition of the Radical Left, after its election victory in January - so few months ago. Prof Jan-Werner Müller, in the August London Review of Books, illuminates my understanding of the political leadership of the EU. Rule-Breaking:


Never before have the struggles among national elites been as visible to the public as they were in the early weeks of this summer, when Greece almost left – or was made to leave – the Eurozone. Never before has an assertion of national popular will, as expressed in the Greek referendum of 5 July, been flouted so thoroughly and so quickly by the enforcers of European economic orthodoxy. (There was an interval of two and a half years between the French and Dutch ‘No’ to the EU treaty in the spring of 2005 and the adoption of the Lisbon Treaty, which retained most of the constitution the French and Dutch had rejected, in December 2007.) Never before have the flaws of the Eurozone been so clearly exposed. We can expect more Greek drama before too long...

In August 2015, Greece is once again under strict foreign scrutiny, its government conceding authority over much of Greek policymaking to the eurozone, signing up to a 29 page Memorandum of Understanding (MoU) for a three-year ESM (Economic stability mechanism) programme to establish a system of quarterly reviews of the reforms by the troika of creditors – the European commission, the European Central Bank (ECB) and the International Monetary Fund (IMF).

The government commits to consult and agree with the European commission, the European Central Bank and the International Monetary Fund on all actions relevant for the achievement of the objectives of the memorandum of understanding before these are finalised and legally adopted. (p.1 - 11/8/15)

Meanwhile the summer fires of Greece seem no longer in the news. Tsipras remains popular though once the third MoU starts to bite he will call a general election - before October tho' there doesn't have to be one until 2019. Refugees from Syria crowd Kos. 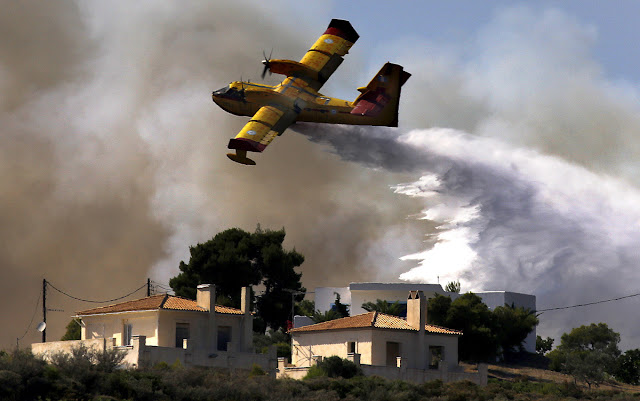 17th August 2015 - Varoufakis on the Third Memorandum of Understanding - the MoU annotated by Varoufakis....


Everybody knows that the dice are loaded


Everybody rolls with their fingers crossed


Everybody knows that the war is over

*** *** ***
A lesson? An explanation...certainly worth watching - posted 31 Aug, an interview posted on Youtube 28th Aug.  [Words unclear at 15.23 - it goes "cut ELA (emergency liquidity assistance) to our banks" and the Netherland FinMin who's the Eurogroup chairman  named at 15.31. It's Dijsselbloem). Varoufakis says Wolfgang Schäuble wanted Greece out of the EU; that getting Greece out of the Eurozone would be good for Europe; good for Greece... I'm curious as to the membership of the FinMin's Plan B Working Group - source of 'shock horror' reactions in some quarters because it entailed a quite ingenious invention for issuing virtual scrip to enable the Greek government to continue cash transactions on the internet despite the European Central Bank being required by EU FinMins to cut the liquidity of Greek banks.
****
A case for Handsworth Helping Hands? Not really. 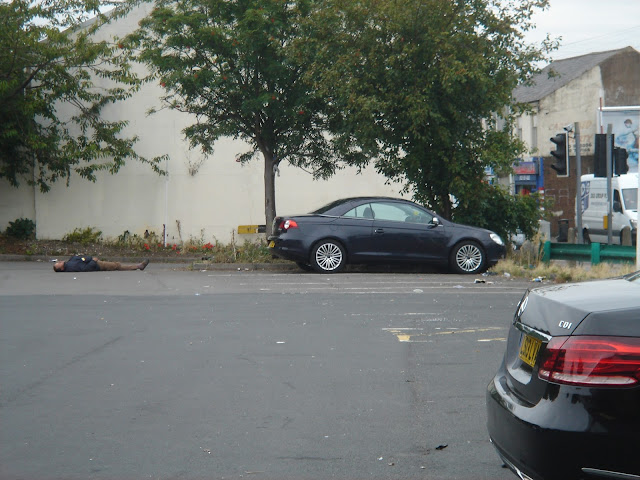 More like Handsworth people at their best. A man prone in the Food Bazaar carpark at the junction of Heathfield and Villa Road. No. He hadn't 'fallen among thieves' but in a short time (at least while I was there) there were three Samaritans - an Englishman an Irishman and a West Indian lady in different ways giving succour. One phoned an ambulance, one talked with him about the 'dangers of the drink', and another got his name and where he was from - citizen of a city of Eastern Europe - and we discussed if he was drunk or on medication or both, and then, in minutes, two Asian paramedics arrived and gently helped him into their ambulance...
"Come along my friend"
"Bye bye" we said "Good luck!" as our man disappeared into the friendly clinical interior of the ambulance.
We three introduced ourselves to one another; shook hands; went about our daily business. I've seen this kind of thing on many occasions in the forty years I've lived in Handsworth and Lozells.
*** *** ***
My parsnips give me pleasure - their germinating, growing, harvesting, preparing and eating...their weight, their feel, their taste and smell. 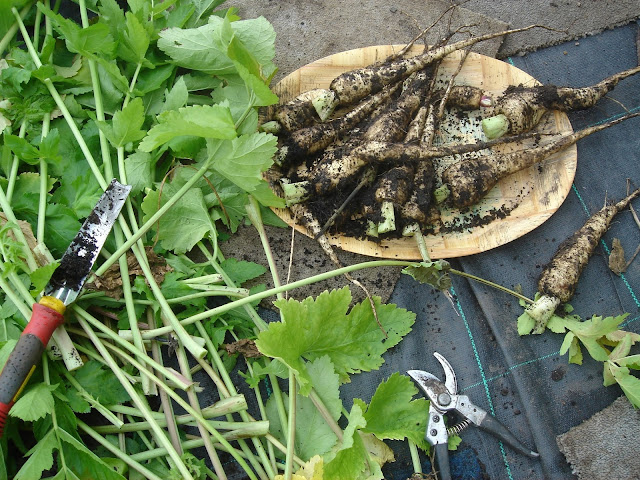 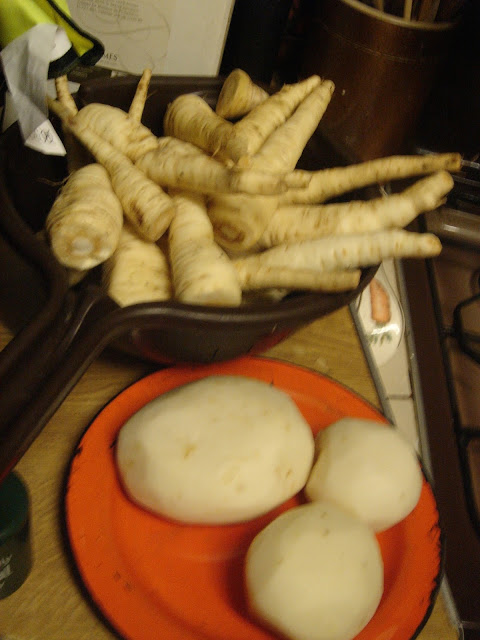 I have been so delighted at growing things on my allotment. My confidence increases with my knowledge. I learn. In July and August I've planted aubergines from seedlings, turnips, beetroot and swedes from seed, raspberries, tayberries, gooseberries - fruit plants bought for a bargain from Aldi, tomatoes given by a neighbouring gardener. My vine thrives; next year I may assay a trellis for it. Winter cabbage seeds are in the ground.

...and vital to all this, my friend Winnie who grafts on the plot and does more housekeeping inside its 200 square metres than I. Together we plan the plot...

...adding, to support the spreading black grape vine, a trellis in front of the shed... 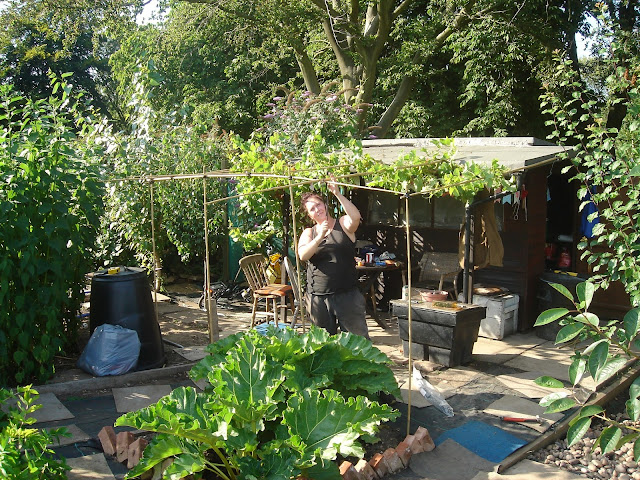 ...and my preoccupation with understanding and trying make compost continues - vigorously. It's in fact wrong to say I'm 'making' compost. I embrace Stanley Whitehead's Gardener's Earth, but learning about the 17th century polymath John Evelyn, I've got a reprint of his essay A Philosophical Discourse of Earth, Relating to the Culture and Improvement of it for Vegetation, and the Propagation of Plants, &c. as it was presented to the Royal Society, April 29. 1675. London: John Martyn 1676. 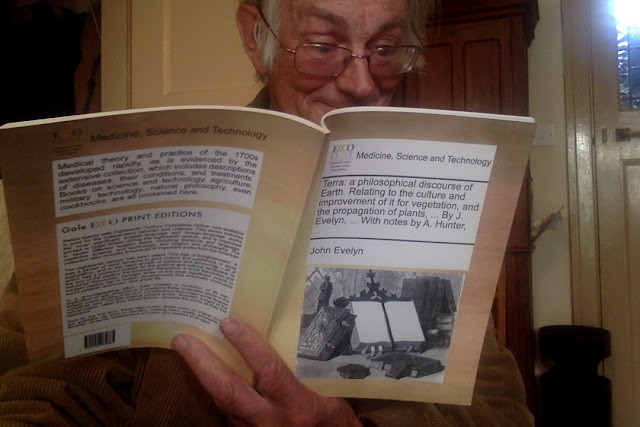 Like thousands before me I'm inventing my own wheel. Type 'composting' into my search engine I get 14,800,000 hits in .44 seconds. Information about composting is overwhelming.

"Yeah" says Lin "but Google won't give you all those hits!"
They come from academia, through to the experience of single gardeners over the world in myriad languages; on film, scientific papers, text, images, tables... in Greek κοπρόχωμα. My understanding is that for all the interest and popularity of the subject no-one has yet been able to make compost. All they can do is attempt to speed up what has been done by nature since the arrival of organic life on this planet. I've now cracked the challenge of how to get perfect compost. I'll go back five years in a time machine (instruction on making and buying time machines on page 94) and stack up my garden waste; return to the present and my compost will ready and waiting, or perhaps everything has aged 50 years (or whatever), my allotment is a car park and everyone's speaking esperanto...