It was the wettest chilliest day this July but on the 24th Hannah Rowan was one year old - a Friday, and the only day that week her dad was off-work selling cars. 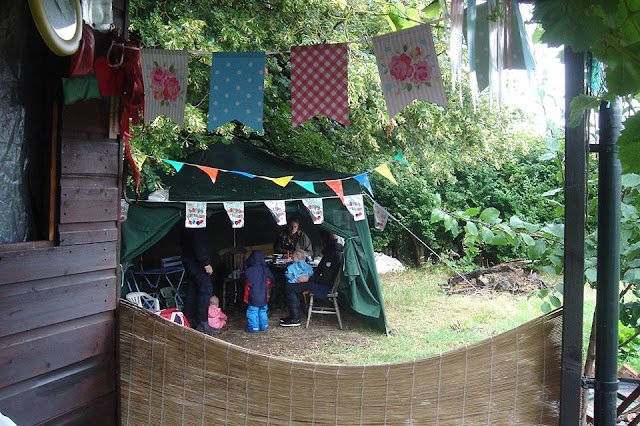 The family and friends gathered over the afternoon on Plot 14 where Winnie and I had set up a gazebo, laid out tables and chairs. Sophia with her mum Liz, whose son, Henry James, was still in hospital after an early birth; her parents, ... 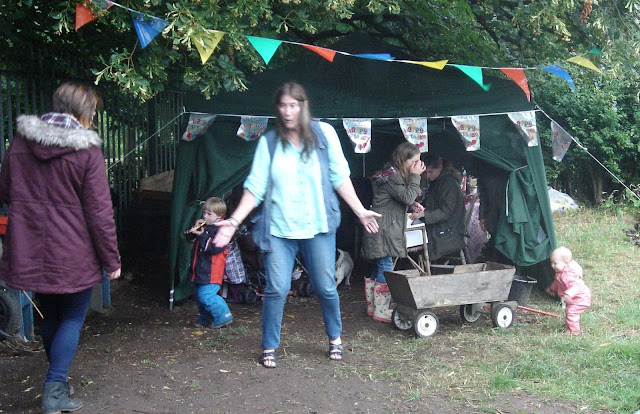 ...a family from Amy's baby group; Oscar dog, of course, Linda and I and Richard; Amy and Guy and our grandchildren, Oliver and Hannah.

Will Hannah have recorded some fuzzy images of her first birthday to recall? Received opinion, which I doubt, says not. Memory's so fallible that I wonder if memories of that age are made up later. A BBQ was intended. Instead Amy, having strung bunting, laid out a table of cold snacks. Well clothed, the children enjoyed running up down and across the paths of the allotment, riding in the plot cart... 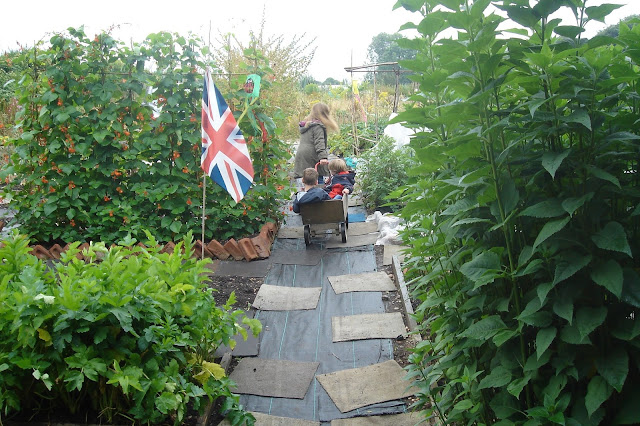 ...before joining the grown-ups for food and a one-candle cake, "Happy Birthday dear Hannah..." 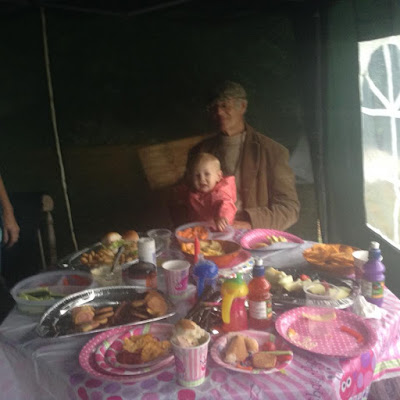 ...after which we played 'pass the parcel' in the gazebo. On went the rain. The boys discovered puddles. By the time we all headed home they were soaked to their skins and happy.
"What rubbish weather" agreed the grown-ups - parents, grandparents, one uncle and several friends "but we'll remember Hannah's first birthday!"

*** *** ***
At the last meeting of the Friends of Black Patch Park at Bishop Latimer Church on 21st July I agreed, somewhat reluctantly, to turn up the following Sunday at Ted Rudge's annual celebration in the Soho Foundry Tavern of the Gypsy connection with the Black Patch. Our chairman Ron Collins who'd normally represent us couldn't be there. No-one else volunteered. Sunday morning it was raining steadily. I put on my long waxed oilskin coat; with this buttoned up and wearing my waxed newsboy cap I can stand under a shower and stay dry. I cycled off to the Black Patch, under 2 miles away over Soho Hill.

It's long been rumoured, contrary to the unproven claim of the official website, yet on the basis of small, but rather telling evidence - a letter from Jack Hill to the star... 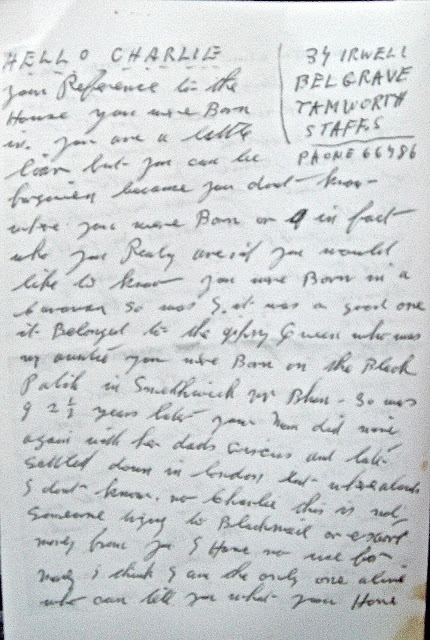 ... which, despite the thousands of fan letters he received, he kept in a secret drawer at his home in Switzerland, to be found by his daughter Victoria after his death - that claimed Charlie Chaplin was born in a Gypsy caravan on the Black Patch on 16th April 1898. The supposition which will aways remain a mystery has been strengthened in recent years by several visits made by Charlie Chaplin's son Michael to the Black Patch where he's met Ted Rudge and Gypsy friends, descendants of those families long ago expelled from the Black Patch to make it into a park, and Ron Collins. Michael agreed to be a patron of The Friends of Black Patch Park. On Sunday he visited again in the company of his son-in-law; a nice and unassuming man who clearly enjoyed the company of the Gypsies, strolling amid the rubbish in the park...

...and standing on the bridge at the junction of Boundary and Hockley brooks, where he unveiled a stone memorial commemorating the Romany connection with the Black Patch, I filmed our visitor saying that "a lot of the things he (Jack Hill) said in the letter have been verified...."

Though it would be tricky to get these suppositions into official records. We got good coverage for the Chaplin visit in the local papers - Express and Star and Birmingham Evening Mail. I know that repeating things in the newspapers creates no more than amplified rumour but it's quite good to have some background chatter on this - even in Wikipedia
I got Michael Scott a free lance photographer standing by to snap us. Ted was keen to get everyone out of the wet and back for a meal at the Soho Foundry Tavern. I wrote to Ron suggesting a meeting of the Friends as soon as possible:


Dear All. May I suggest we meet again asap to:
- Review the fall-out from Michael Chaplin’s visit to the BP and his statement about his father’s birthplace - which I recorded - Arrange a meeting with Cllr Sharon Thompson of Birmingham Soho Ward who I’ve spoken to. She has told me she gets calls from quite a few people especially on James Turner Street about the BP and especially about the derelict community centre - Arrange a meeting with Cllr Darren Cooper who has emailed to say that he would be ready to meet us any time (MC visit to the BP gave us a boost in that direction I suspect - Make a contribution to the current consultation on the re-bounding of Birmingham’s electoral boundaries (can be done on the internet( suggesting that Cooper’s Soho and Victoria Ward in Sandwell transfer the Merry Hill allotments and BP area to Soho Ward, Birmingham. Sharon Thomas is aware of this and would be supportive. She knows the problems and knows there are no voters there but also that so many users of the park do and could come from her ward.  Love, Simon

Ron fixes a meeting for the 11th August but we've got a committee on that day for Handsworth Helping Hands which I don't want to miss.


Ron. Sorry re 11th. Here’s the message from Cllr Darren Cooper that i got on Facebook and said I’d forward to you.
QUOTE 'Hi Simon it was good to see Michael Chaplin in Black patch, I'm just sorry I was not aware of this until it appeared in the news. I have made many attempts in the past to get a solution to the area including the historical Soho foundry. I'm still keen to look at options. However this just seems to hit a brick wall. I had extensive meeting with the Lunar society all to know end. I'd be happy to meet with you to look at options if you contact my office on 01215695666. In any case finding a solution with Council money alone is a non runner given the cuts we have to make. B'ham are in a worse place than Sandwell so can't see that making a difference.’
DC’s last sentence arose as a result of my suggestion that the Black Patch might move into Birmingham’s Soho Ward via the current boundary shift consultation
My reply to him on behalf of the Friends:  'Thanks Darren. It is such a tricky wicked problem - one you clearly understand. I will indeed be in touch. You know at the moment that Hayley Insley, your senior regeneration officer, is looking at Eastside's offer but which involved losing a third of the Patch. We are bound by our constitution and belief in the park to resist this while ready to be participate in all attempts to find a way through in these horrible times for local government! Kindest regards, S' (END)
I hope the meeting on 11th Aug could formulate  - say - 3 good reasons why the latter ward boundary transfer should happen with details of where exactly the boundary might run. I’ve spoken to Cllr Sharon Thompson (Soho Ward, Birmingham)  about this proposal and she says she is happy to endorse a proposal on the boundary consultation web form from FoBPP. She also says she knows Darren and would be glad to meet us and him to discuss the Black Patch (this doesn’t commit her or him to discussing boundary changes to their respective wards - just the possibility of partnership working on the problem.)
Once I have support and ideas I’m happy to fill in the consultation form
Simon