'A fortnight ago things changed...'

.... for Black Patch Park and its friends. It was not as if The Friends haven't left a lobbying trail since we founded ourselves 13 years ago. But last year - 16th March 2016 - we met the late Darren Cooper when he was the Leader of Sandwell MBC. Unofficially he assured us that things must change. We had prepared a draft report on the case for bringing back housing along the edges of the Black Patch, arguing that only by having people who opened their windows and doors onto the park was there a hope of restoring and maintaining it. 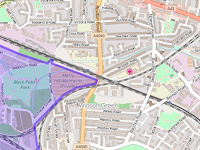 In the meantime the park became more and more ravaged by fly-tipping - with the worst we'd ever seen hitting even the national press at the end of February. Given the amplifying repetitiousness of these problems I didn't hold out much hope for the meeting we'd sought with the new Leader of the Council several weeks earlier. Phil Crumpton and I had sat in the middle of a wrecked space venting - feeling our hopes were futile, wasted.


At the meeting between Cllr Steve Eling, Leader of Sandwell MBC and the Friends of Black Patch Park on 23 Feb 2017, Cllr Eling said he was impressed at the comprehensiveness of the report that the Friends had produced, recommending that people be brought back to Black Patch Park as the only solution to its neglect and blighting. His Cabinet had walked around the park a few weeks earlier. He had followed our case. He agreed with our plan and its arguments for rezoning the area for new housing around the park and beyond. This, the Leader agreed, was the only way to resolve what he described as the ‘conundrum of the Black Patch’ - a problem created by a prolonged series of failed piece-meal measures; in particular, a repetitive cycle of forced illegal entry, consequent trashing, expensive clearance, inadequate boundary securing and monitoring. “Black Patch” he declared “has been historically disadvantaged by its lack of connectivity. But there’s a new connectivity which changes the fortunes of the Black Patch”. There would be no solution to the ‘Black Patch conundrum’ without a restorative strategy for this part of the Borough.


- Such a strategy must not be implemented piecemeal, since piecemeal actions have brought about the notorious problems of the Black Patch,

- The strategy must reconfigure ‘a new space’ that visibly and physically breaks out of the ‘isolation’ of the park created by transport and former industrial infrastructure – such as railway embankments and the ‘tunnel’ of Queenshead bridge,

- This new space is an answer to the challenge of how to create a sustainable community in the area; bringing new tenants and residents in affordable housing, not only to the borders of the park, but to a wider area, via additional housing along a new hub-walkway linking Black Patch to the Metro station on Handsworth New Road and the neighbourhood of Birmingham’s Soho district.

Note: These are the views of the FoBPP following their meeting at Sandwell Council offices but I received this email y'day:


'Good Afternoon Simon. Both the Leader, Cllr Steve Eling and Cabinet Member for Leisure, Cllr Richard Marshall have agreed that your draft notes are an acceptable account of the meeting and are happy for them to be in the public domain. If I can be of any further assistance please do not hesitate to contact me. Many Thanks, Jane Perham, PA to The Leader'


The Friends of Black Patch Park have been allowed a few weeks of optimism, believing after our meeting on 23 Feb 2017 (current group photo on the top of this blog entry) with the Leader of the Council, one of his Cabinet colleagues and officers, that the area around the Park would be rezoned for housing - and the future of the park assured by restoring it as the green centre of 'a community of place'. The words of Cllr Steve Eling, Leader of Sandwell MBC, had been that there must be an end to 'piece-meal' decisions in this area of Smethwick, and a recognition that 'the conditions now exist for a sustainable community of park users in the area; that would finally 'offer a solution' to what he called 'the Black Patch conundrum'. But Sandwell's Cabinet have now referred, to planning committee, a plan for a transit site for Travellers next to the park (Ref: DC/17/60410), and, in so doing, have driven a wedge through Cllr Eling's vision of a sustainable housing plan for the area - one that offered a solution to the decades-long neglect of this area. Neither despair nor resignation are in the vocabulary of the Friends of Black Patch Park. We shall continue to make a case that we, mistakenly, understood had been accepted by the leadership of Sandwell Council. The speed with which the transit site (see map below) between Boulton Road and Foundry Lane has been cleared, suggests that despite the reference in past weeks to alternative sites in the borough, these were, in actuality, given no serious consideration. Now we are being asked to believe that a transit site on a vital part of what ought to be zoned for housing in Cllr Eling's vision, as he shared it with us on 23 Feb, will actually be paid for and used by Travellers, when the tempting space of Black Patch Park, whose security Sandwell MBC and the police have been unable - even unwilling - to protect, is just across the road. The placing of this site, intended as a means by which the council can trigger eviction procedures under Section 62 of the Criminal Justice and Public Order Act 1994, is more likely to ensure continuation of the 'piece-meal' problems of occupation, trashing and expensive eviction and clearance that have long blighted the Black Patch area.


This is Cllr Steve Eling's 3-page letter to FoBBP member Phil Crumpton seeking to allay fears about the current decision to place a temporary Traveller's Transit site next to the last remaining homes near Black Patch and in the centre of an area that a month before he'd described as the 'sustainable housing area' that would recreate Black Patch Park as a 'community of place'.