'A friend in a field'

Six years ago I posted some sad pictures I'd been sent of an old boat I'd once sailed - her untidy cabin filled with dirty water, her cockpit invaded by greenery. This was Young Tiger, a 22 foot Westerly built in England 53 years ago, sat in a field in an eastern state of the USA, 40 miles from the nearest sea at Baltimore on the Chesapeake. 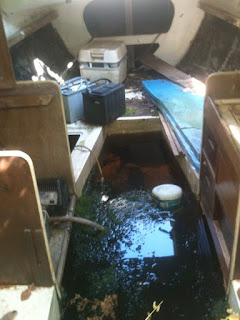 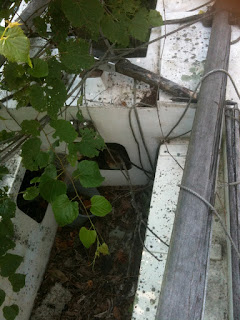 
Hi, Simon. Did you ever find out what became of Young Tiger after this post? (28 July 2011) Sue is a dear friend, and I'm a young American sailor myself (though in Wales at the moment)... If no one is looking after the boat, I'd love to beg someone to let me buy her. Very best, Whitney

28 Aug: Dear Simon. I was delighted to hear from you. I’ve sent an email to Sean and Sarah straightaway. I’m in Wales at the moment, but back to the US in early October and quite serious about finding YT if I can. I’m based in South Carolina, but I work in the DC area regularly and expect I might be up that way again in the autumn. I won’t get my hopes up too high, but buying a soggy 1960s boat that would need huge amounts of restoration has really caught my imagination, I confess. I’m a builder of sorts by trade (very good dry-stone waller, sort of rubbishy carpenter, etc), so I hope I could do a bit of it myself.
I was with Sue just last week, and she mentioned you and that very Merry Wives reunion as we drove along the A470 together!

She is an extraordinary woman - one of my very favorites. She and Phil were the first to take me sailing some years ago...

...and I’m so grateful to them for it. I’ve gone on to do a few RYA courses since then (currently sitting comfortably at Day Skipper level after a week in St Lucia last February), and I’ve sailed newer, bigger French boats as well as older, creakier wooden boats like a Bristol Channel Pilot Cutter, but it’s the little Westerly I love best. They’re so approachable. Sometime a few years ago Sue and I were sitting on her front lawn having a gin and catching up after I’d returned from my first big sail when suddenly she disappeared into the house for a few minutes with no explanation … She returned holding one of the charts from your voyage. “I found this the other day while I was clearing up,” she said. I can’t recall if it was Barbados or the Grenadines she had in her hands, but we talked for a long time about the sea that afternoon. It was a lovely moment. Wish me luck, and thanks again for the quick response! I’ll let you know if I hear anything back. Very best, Whitney 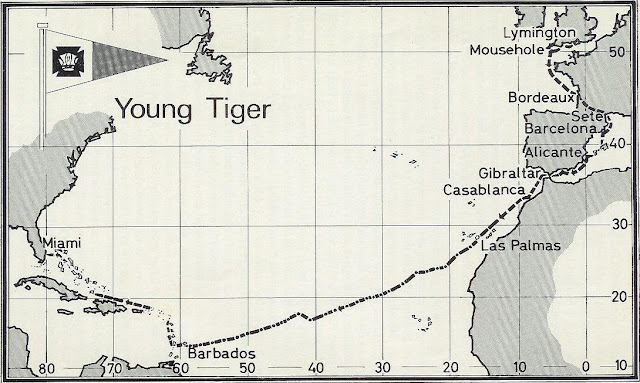 28th Aug 2016:  Dear Sean and Sarah. Please forgive this email out of the blue. I’m trying to find the whereabouts of a little Westerly 22 called Young Tiger. I think you know Simon Baddeley - at least electronically. His companion on Young Tiger's big Atlantic crossing, Sue Pulford (now Best), is a very dear friend of mine and the reason I began sailing just a few years ago.

I linked up with Simon via his blog just a few days ago, and he’s very kindly pointed me to you. I’m sorry to bother, but I thought it might be worth a shot to email you. I hope you don’t mind.
I’m in Wales at the moment, which is where Sue lives and where I’ve trained and still work sometimes as a dry-stone waller, but I’m American. I’m from South Carolina (don’t hold that against me!), but I spend much of the year on the road for work, leaving a trail of beautiful stone wherever I go. I even built on the National Mall earlier this summer as part of the Smithsonian Folklife Festival, though the bulk of my work is down in the mountains of southwestern Virginia and here in the wild hills of mid-Wales. Here I am, if you’re curious: www.whitneybrownstone.com    Anyway, I’d love to know what’s happened to the boat these last few years. The last photos I saw showed her in quite a sad state. I don’t want to be too forward here since we don’t know each other at all, but I’d be so eager to rescue her if she needed it. I’m 33 and perhaps a bit foolish, but I think she’s quite a special little boat - not to mention quite special to someone I love - and I’m not afraid of a project. Even if she’s found a good home by now, I’d love to know how’s she’s faring out in the world if you have a few minutes to write.
Sue still sails a Westerly 22 after all these years. Vickie, moored in Aberaeron in Cardigan Bay, was the first boat I ever sailed on, and I fell quickly in love. I’ve gone on to sail bigger, newer boats here in Wales and down in St Lucia, gradually working my way up to skipper, but none have ever been as charming as the little Westerly.
Thanks very much for your time. Best wishes, Whitney Brown

Email to Whitney 29 Aug: Hello, This is Sean, the son in law of the John P. Coyle. JPC is the gentleman who owned the Young Tiger before it came to be where it is at now. She is still in the same spot in a field in Adamstown Maryland. It is most likely that she could be had for free to someone willing to take on such a project in ernest. If you are interested, I would be happy to inquire/make arrangements. Let me know .... would love to see her sail and crew with her.  Call or write us, Sean and Sarah

29th Aug: Simon, can you believe it? More soon. Pleasantly in shock at the moment! Very best, and THANK YOU, Whitney. Sent from my iPhone

29 Aug to Whitney, copied to Susanna Best (Sue Pulford): No I do NOT believe it (:)) After hardly half a week’s checking - that’s almost disappointing - except it’s not! I too am in shock at the continuity in emails in these times of transient addresses. And so good to feel goodwill from Sean. I wonder how YT's fared on her flatbed through those Maryland seasons. I can only imagine YT wanted to be found, old timer that she is. Here are tales to tell of adventure and perhaps more to come. Best, Simon

23 Jan 2017: Hi Simon. I hope this finds you happy and well. I’m sorry to be out of touch so long. The autumn just seemed to slip away with one thing and another ... And a very nasty election. (I was marching in Washington on Saturday, rest assured) 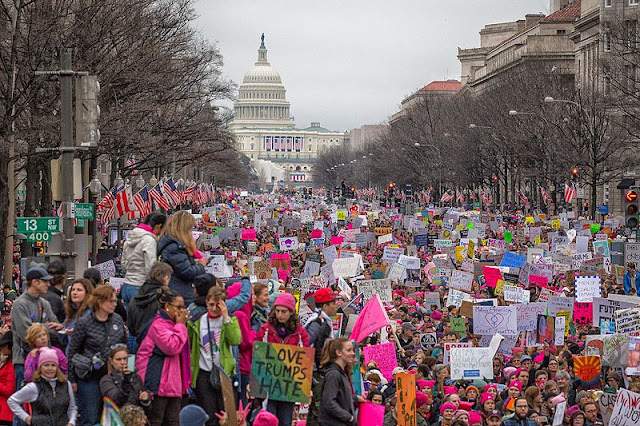 I’ve just finished an email to Sue updating her on my morning’s adventure, so I thought I’d better check in with you as well. Finally, in horrendous weather, I went to see Young Tiger in her field in rural Maryland. She is just as Sean described her to me in his email: in a bit of a sad state, but not beyond repair. I was disappointed to see that her spars are all rotted, but I do think the hull will be just fine with some TLC. Then there’s the matter of, oh, ALL of the equipment: sails, radio, battery, engine, loo, cooker, lights, etc! It will take me a bit to get sorted so that I can begin the restoration process, but I am keen to do so. I want her to be beautiful again, and while I probably won’t sail her across an ocean, I’d love to get her down to Admiralty Bay in Bequia once more ... Best,
Whitney


23 Jan 2017: Dear Whitney. We are well and I’m the happier for seeing that striking image of you and Young Tiger. It was easier to see you in the crowd on Independence Avenue, because it was so small compared to the previous day’s inauguration where the crowd was many times larger than at the 'nasty women’s' march. I have access to 'alternative facts’, as will we all for the next few years.
What a really lovely picture. So you traced Young Tiger to a field under autumn trees in Maryland; Denys Rayner’s small boat that looked after us along the coasts of Spain and Africa, the Canaries, the Caribbean Islands, the Bahamas and on the deep ocean between those magic shores.

Sue phoned me, seconds before I opened your email. You have stirred dream memories of an adventure long ago.  Your journey to a field in Maryland seems destined, and you are to windward of us in age, energy and enthusiasm.  I’m not surprised those spruce spas have rotted - through neglect rather than use.  I am excited at your plans for restoration and am sure, as is Sue, that you can make ‘our' little ship whole again. Make her yours. She’s not been properly owned for decades. If you want a rough ground plan of the boat from the original brochure that came with each model including YT, just ask. I have it in my files and can easily get it copied.  All the very best, Simon

So she's 3570 miles away as the crow flies, far further by other means, and - so it feels - in time. Last Wednesday, Whitney and I met in London, and over a long lunch at the Lighterman in Granary Square, ran through what I remembered about the boat she is taking under her capable wings. I gave her a copy of the plans - inside and out of the W22, and ran through the gunter rig, the reasoning behind bilge ballast keels, the evolution of YT's design in the mind of Ben Rayner and the boat's aesthetic, the reason Denys preferred outboard motors, 'Blondie' Hasler's self-steering gear as its inventor had explained it to me, the simplicity of Mary Blewitt's guide to taking noon sights - whch I reckoned W had begun to learn on her Day Skipper course and would hardly need in the days of SatNav. I am inspired by this continuity; not a revisit, a relay. Whitney Brown is a true grafter. I cannot imagine anyone more qualified in character, knowledge and craft to take on the challenge of taking Young Tiger back to the sea where she should be.

A message on 8th March from me to WB on Facebook: 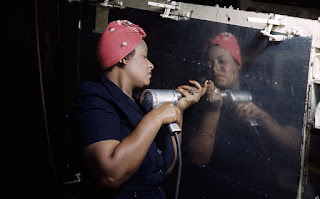 I am told this was the original Rosie. It's clear you have all the skills and craft and strength to remake YT. My concern is the interaction, over many years, of saltwater, iron, and fibre glass as this may affect the integrity of the keel bolts. Ben Rayner built to Lloyds spec, as you know, which means that he would have wanted heart and soul that no manufacturing blemish would endanger your safety at sea in any boat that came from him. His character gave me cause to sleep sound on stormy nights. The other area (there may be many others you will find) that would concern me, would be the pulpit fixings, but much more important is strength, after 50+ years, of the mast bracket. Rayner intended that the curve of deck and hull provide the strongest resistance to the forces on the rig exerted through that, but recall that the gunter rig has no back-stay, which means either aft shroud will take the unsupported force of the boom in the event of a hard gybe. Oh and while I'm thinking on this, few things are more undignifying for you and your boat than that she become waterlogged or worse because the heads outlet or inlet fail.