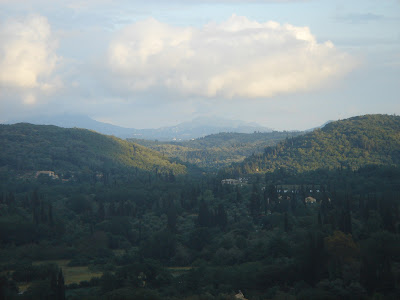 Less than a month from midsummer, yet we've had evenings so cool, we've been tempted to light the wood stove. As May ends, we go back to England where, this last fortnight, it's been warmer than Corfu. We packed; worked through our departure checklist; said goodbye to Vasiliki, Effie and Katerina.
"Our aeroplane will come over the village at noon. We will see you and wave"
Katerina gestured a wave back.
"Καλό ταξίδι!"
We hugged and kissed.
The morning was fresh with a cool breeze. There was dew; the island even greener than usual.
By 10.15 we were at the airport. In that busy noisy place; squeezed on the plane; strolling carpeted corridors via escalators and lifts to the the Arrivals concourse; in the train and coach to Birmingham - every little crowd of people looks like the cast of a TV soap onto whose set we've stumbled in a dream; anonymous yet familiar; faces and figures I'm sure I've seen somewhere, which I know but who don't know me and don't really want to be recognised, processing slightly mutinously through the routines of departure, showing papers that qualify us to travel, invaluable wine-coloured passports - a colour the original EU nations took nearly five years to agree; orange tipped boarding cards and luggage tags; removing my laptop to show it's not an Improvised Explosive Device, putting metal things in my jacket pocket - watch, coins, pens, keys, flash drive - and laying it in a plastic tray on rollers; an intriguing glimpse of familiar luggage in different colours under an X-ray - a Wassily Kandinsky of my own composition... 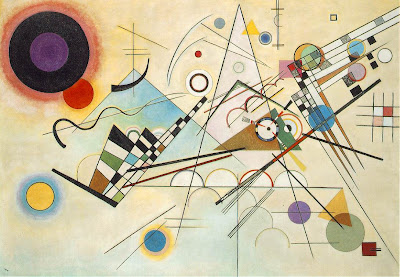 ...resigned to the small affronts involved in lining up to pass through a metal detector like the frame of a guillotine, removing 'articles of clothing' - belts and shoes - privately and collectively slightly demeaned at qualifying with a series of beeps to being gently and publicly groped, here and there a bag spilled and searched with white rubber-gloved hands, herded through checkpoints, sat down,stood up, bussed, boarded, belted in; the talk and prayer sheet showing exits and the brace position and what to do "in the unlikely event of landing on water". So we travel in the air glimpsing the Croatian archipelago, crossing parched fields around Trieste, then Alpine peaks with streaks of snow visible through light cloud, then snooze, more reading and a tasty coffee from the trolly, groping for English money, going to the humming loo after apologies to a passenger on the aisle - a regular in The Queen Victoria or was it The Rovers or The Woolpack? - a stocky white crop-hair man of few words who turned off my mobile for me when I was struggling, before take-off, to obey a recorded instruction about electronic devices.

*** *** ***
Once home, unpacked and relaxed, Amy came round with our grandson. We showed Oliver the suit that Natasha and her family had given us for him as we'd said our goodbyes on Democracy Street
"See you near the end of August" 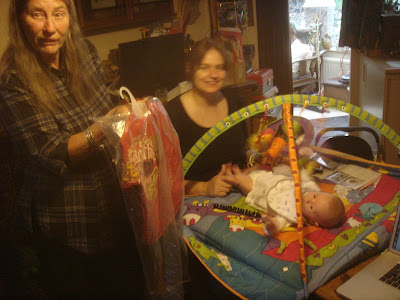