Two years ago the garden across the path from our house was overgrown, full of bits and pieces, dominated by a spreading fig tree. Since then Effie and Adoni who own the house attached to it have rebuilt their apothiki, tidied the garden, planted flowers and vegetables, laid out a small hard surface for dancing and allowed a large walnut tree to spread in place of the fig, whose wood we've already used to heat us over winter. The place has become lovely for eating in company, open to the views from the village, shaded from the sun. 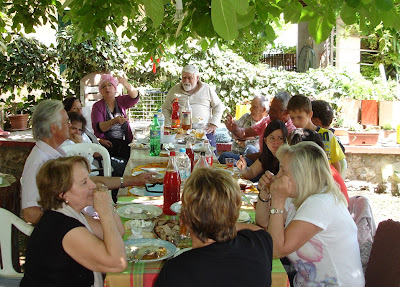 Adding our third table a banquet is soon ready. On Sunday it was Dimitra's 16th birthday - daughter of Natasha and Foti, grand-daughter of Vasiliki and Lefteri (Λευτέρη Ιωνά), sister of young Lefteri. The family plus uncles and aunts and parents-in-law gathered, plus us - the neighbours - and sometime during the afternoon, in the village's style of spontaneous invitation to strangers, a couple from Paris who were strolling along Democracy Street, just above.

Dimitra's birthday party from Simon Baddeley on Vimeo.
*** ***
Richard Pine of Perithia, in one of his regular pieces for the Irish Times, referred to some northern Europeans seeing Greece as 'a two-dimensional holiday destination'; England’s Coney Island, Hellas-on-Sea. It’s not so specious a view, given the contribution of tourism to a country that didn’t have a proper industrial revolution. 'Proper industrial revolution'? There are many countries that have imported only the end products of that slow trauma that Britain led, gaining her an empire greater than Rome’s, greater than any before or - if marked by colours on a map of the world - since. 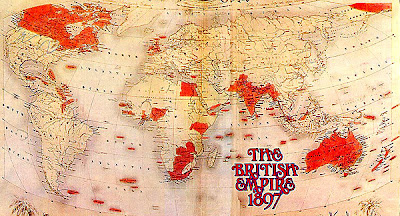 Our industrial revolution isn’t just steam, smoke and chimneys, the architecture of manufacture on a scale previously unknown, accompanied by a vast military, fleets, mighty ports, roads, waterways and railways across continents, telegraph encircling the globe.
A professor of electricity in 1895 explains cables to a new recruit “They are the nervous fibres of the world, conveying intelligence from one continent to another, just as the nerves of your body send the impressions of the senses and the wishes of the brain to every limb.” It is also the social forms, the values, the human organisations that grew by habit, hazard, invention, reform and chance as part of the phenomenon I was taught as a child in class to call an industrial revolution – peopling it with a cast of 18th and 19th century inventors - Boulton, Watt, Murdoch (their remains in our local church in Handsworth) Stephenson, Arkwright, Brindley, Crompton, Cort, Hargreaves, along with soldiers, sailors, writers on ‘how we live now’ and reformers, political and artistic, rueing urban immiseration, drawing and writing the consequences of commodification and disenchantment – creators and narrators of that gigantic hegemony, along with nameless teeming populations of labourers, seamen, soldiers, colliers, coolies, navvies, migrants, immigrants, settlers, colonists. 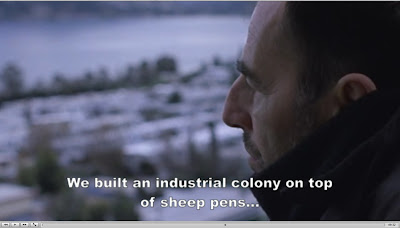 A wise writer, Athina Rachel Tsangari, in the recent Greek film Attenberg – which Lin and I liked a lot, watching it twice a few weeks ago – says, through the mouth of one of its main characters, Spiro, as he gazes over an ekistical Doxiades settlement laid out in Euboea – 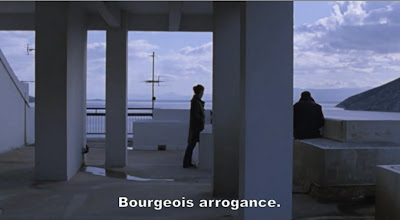 Greeks through their diaspora have been as much part of the continuity of the industrial age – and that which follows - as the population of any nation. Their individual repute as artists, academics, managers, entrepreneurs, inventors, scientists in the van needs no advocacy; but Greece, the country, the wondrous land, is outside the industrial club. Its magnificent built projects are an expensive refinement of the bizarre airfields and offices that feature in Melanesian cargo cults. Greece skipped the slow burn we call our industrial revolution. It never evolved the social forms, values, and human organisation that accompanied the spread of Satanic mills. Greece has its smoking factories and gouging quarries...
...often used against grey rainy backgrounds in films by Greeks to refute the two-dimensional Greece of Shirley Valentine... 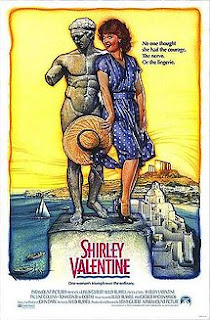 ...and innumerable series set in a sun-sea Republic – but these projects landed here, hurled by centrifuge from industrial heartlands. As it says on the film, there are cities, factories, quarries, railways and of course ships – a vast fleet created and owned by Greek dynasties – but the managerial and bureaucratic revolution that was part and parcel of our industrial revolution did not happen. The artifacts of industry were, as in so many countries that were predominantly as agrarian as Britain in the 17th century, plonked 'on sheep-pens', their paperwork processed by men hardly a generation from their village.
By contrast, look at me! But for my wonderful eccentric maternal grandmother who left Mayfair to make the dairy farm where I was born...
... I descend from near 200 years of bourgeoisie, grown by the age of industry, iron-master, mill owners, academic, librarian, archivist, journalist, soldiers, civil servants and businessmen in South America, Portugal and India, diplomats and spies, a publisher, a political cartoonist, television producer, broadcaster, plus a lawyer, an accountant and somewhere, more remotely, a bishop and an actress. We are urban urban urban. This is why I hold such respect and admiration for those who - like the monks who preserved writing, text and thought into the Renaissance – had fathers and mothers who still worked the ground and made a living from the land and just managed to pass their craft to their city bound children.
Antaeus Ἀνταῖος was a giant of immense strength which he drew from having his feet on the ground, on mother Earth, Gaia. When Hercules Herakles, as one of his labours, lifted and held Antaeus so he could not touch the earth, he was finished. 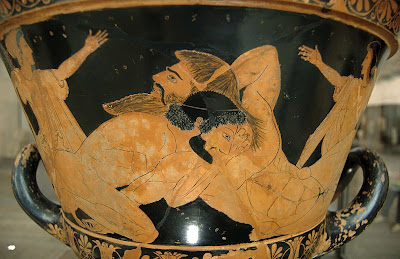 Zola’s Earth demolished the rural idyll, mocked ‘back to the land’. John Berger, a century later, called it Pig Earth; that working the land is no refiner of character. I do not need land to recover a spiritual dimension missing from the city. I need to meet and negotiate with the land to learn not to destroy it with my voracious urban greed - putting the world at risk. I'm the first person in our family to try my hand at the land in six generations - and I'm more or less hopeless at it.
Back to the future ~ 10/6/12: 'In Greece, a painful return to country roots; -


KONITSA -- Thirteen years after abandoning rural Greece for a career in graphic design, Spiridoula Lakka finds herself in the last place she expected to end up - watering a patch of lettuce and herbs in her sleepy village...

Back to the future ~ 5/6/12: I've come to a blog called Breach of Close by Stefanos Christoforos. One page 'Tells of Loss' refers to Yannis Kounellis’ work at the Museum of Cycladic Art - 'a response to the turbulent times in which the Greek people are living':


...For Kounellis, however, the problem is not the economy but identity. He says we have lost our sense of who we are. It is broken, like the shattered cast of an ancient statue. Some would argue it was not the crisis that broke it but the cultural estrangement wrought in the hyper-materialist decades that preceded and precipitated the crisis. Not everything has been lost, though. “They said the same thing after the war and then again after the civil war,” he says, “but the country survived.” Perhaps, as Cavafy wrote, the gods are not dead, though the statues may have been broken and the gods driven out of their temples.... 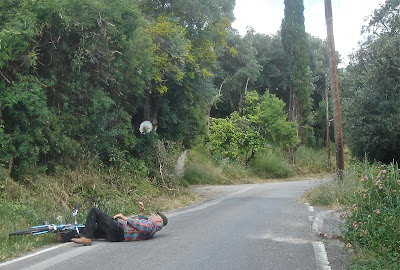 Before they came to help me up - unnecessary but appreciated - a walker with a camera took a picture and later emailed it - a record of how well I'd fallen; unhurt, unbruised, unflurried. A perfect fall like the young champions do on ice and jockeys from their galloping horses on the TV. I felt Pooter-proud to have relaxed at just the right moment
"Because" observed Carrie "you were coming back from Nisaki where you'd been drinking with Aleko. That's why you fell over. That's why you didn't hurt yourself." 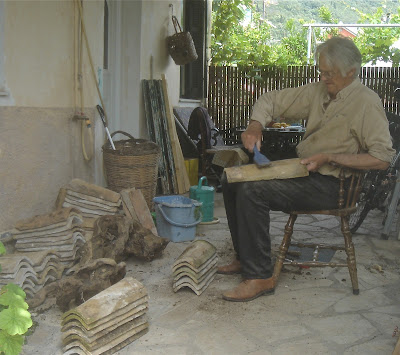 Meanwhile I'm scrubbing moss and dust off old Corfu tiles, a gift from Nick in Skripero, while Linda continues to lay them on the apothiki - a beautiful job, these tiles, each unique, made long ago over the thighs of women whose thumb marks are visible in the clay. 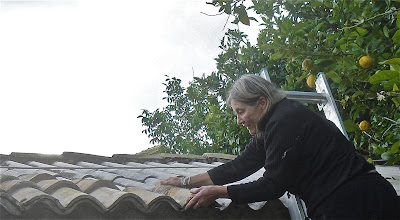