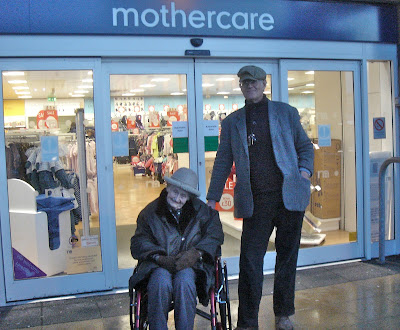 Mum and I went to buy baby things for my daughter's and her grand-daughter's expected son. It's the first time this coming wonder became real. We had a lovely hour together looking at various useful and slightly indulgent products and bought some clothes for Amy and for the baby as well as a bouncer, which Amy can collect from her local Mothercare in Birmingham. Sandi looked after us as we shopped. She seems about 13 years old compared to us, and was fulsome with enthusiastic advice. Outside the shop we ran into Isla, shopping with her husband Bruce, held together - he said - by so many metal implants, he can't pass security to fly, who lives way down the eastern edge of Loch Duntelchaig.
"Will you take our picture, Isla?" 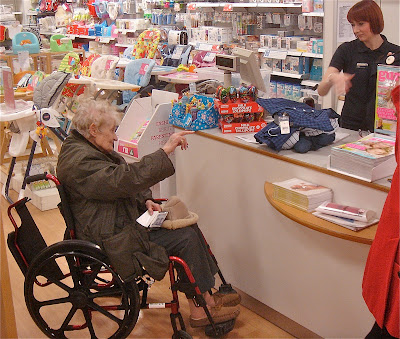 *** ***
My dear friend Dhiaa-al-Asadi spoke last year of a day when we might visit the site of the City of Ur of the Chaldees, near Nasiriyah, that I learned of at school, to stand together by the great Mesopotamian ziggurat raised in the 21st century BC, a place where some say our civilisation has its roots: 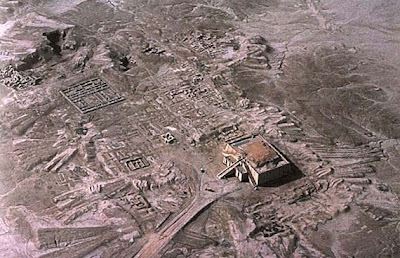 I replied with joy; affirmatively. I'm missing Dhiaa - the great gift that came to me from the ill-judged invasion of Iraq. He has taught me, faithless - and bereft for it - much about faith, though in matters go government he is secular. I have learned as much about Christianity from Dhiaa as about Islam. When after much complex work we were able to get Dhiaa over to  Birmingham for the start of a brilliant Phd several years ago, our first long conversation occurred as he, still I'm sure, tired from his journey from Iraq via Jordan and Heathrow, wandered at my invitation around the Barber Art Gallery on campus. We stood in shared pleasure before Jan de Beer's Nativity.

"I've not seen so much wonder - held in - in suspension. The angel on the right whose hair's blown back by unseen force is supposed to be Satan at birth of his undoing." We stopped opposite a painting The Adoration of the Child Jesus by Cosimo Rosselli.
"I have always been puzzled" I began 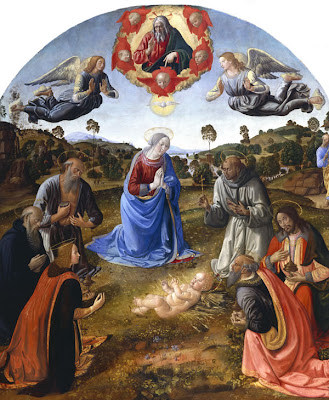 Dhiaa and I went closer to the picture, as you can at the Barber, a public place you can have almost to yourself. We gazed at the sky and the Virgin's dress of blue egg tempura painted 500 years ago
"Who are these?" I asked pointing at the lucent sky, my finger millimetres from the paint "God? The Father and - and - then The Holy Ghost. It's unclear to me."
Dhiaa without a trace of the didactic, pondered his own interest in one of the foundational ideas of another religion.
"Is it meant to be a mystery? Your puzzling. Is it  how it can be understood?" We talked more about the rest of the picture, as though it were on a wall in our homes. Later when we revisited the Barber we would explore - I the student - the enduring differences between Sunnis and Shi'a, and then we came to the filioque, the difference that men have debated, argued and quarrelled over since the First Council of Constantinople in 381...(blog ref, blog ref)

....and another thing, the idea that as so many struggle to release ourselves from the bonds of religion we come to see how they may also be anchors. Religion both releases and controls actions based on instinctive desires. Secularism, especially atheism, tends to scorn repression, relying on good governance separate from church, temple or mosque. Yet it may be that the worst imaginable actions - and we have seen much of them this last 100 years - may require a degree of repression that is beyond secular regulation; suppression of our worst instincts that can only come from impulses that transcend the rule of law; from that which is sacred, rooted in myth; beyond the utilitarian in its understanding of evil, and what we can explore through evidence-based policies on crime and punishment. I shared with him the arguments I'd developed about substitutes for repression and guilt, the idea of an internal polity (the paper I wrote back in 1995)...
*** ***
I've again taken long walks about the Strath. The river's full. Rain and snow melt. I think I managed to tire at least one of the dogs but only because she indulged in a mile's fruitless circular chase of a red deer twenty times her size.
*** ***
I shall translate this - or try to - later; from Ano Korakiana, a celebration of Epiphany, when John Baptist dipped the Christ in the Jordan, came a beam of light with the words &lt;Ούτος εστίν ο Υιός μου ο αγαπητός εν ω ευδόκισα> ~ "This is my beloved son, in whom I am well pleased".
Με πολλά μποφόρ και ψιλοβρόχι εορτάστηκε στο χωριό η Ημέρα των Θεοφανίων. Στην εκκλησία του Άη-Γιώργη, το Συμβούλιο των Επιτρόπων είχε επιμεληθεί τον εορταστικό διάκοσμο, με την αναπαράσταση του περιβάλλοντος της Βαπτίσεως. Όμως, με το «εν Ιορδάνη…», το περιστέρι (συμβολισμός Αγίου Πνεύματος) κτυπημένο από το δενδρολίβανο του ιερέως «πέταξε και πήγε στις βρυσούλες…». Οι πιστοί θα αναμείνουν στη σειρά για την προμήθεια αγιάσματος στα γυάλινα φιαλίδια τους, ενώ οι Επίτροποι θα τους προσφέρουν γλυκό και ένα μικρό ημερολόγιο με την εικόνα του ναού. Την ίδια ώρα, η Φιλαρμονική μας βρισκόταν στην εκκλησία του Ποταμού για την εκεί τελετή της Βαπτίσεως, ενώ μόλις που θα προλάβει την κατάδυση του Τιμίου Σταυρού στον Ύψο.

Amid strong winds and drizzle the village celebrated the Day of Epiphany. In the church of St. George, the Board of Commissioners had arranged the festive decorations, symbolising the sacred Baptism. But with ...

I shall have to give up and ask Aleko or Nikos for help with the rest, but I do know that a lot of the men are going to strip off down by the shore at Ypsos and dive into the chilly sea after a gold cross.
Letter from Aleko:

Dear Simon and Linda. First of all A VERY HAPPY NEW YEAR and may the drachma stay where it is!!! Your attempt with the language is excellent and please carry on. You are miles ahead of any English person living here! It is ΧΡΟΝΙΑ ΠΟΛΛΑ and not ΠΟΛΛΑ ΧΡΟΝΙΑ!! Although the meaning is the same you say this at every celebration except at funerals. Last week I put my foot in it at a funeral at the Nisaki church when I said Χρόνια Πολλά!!!! The other point is : ΘΕΟΦΑΝΕΙΑ (Theofania)-never in singular!!! (τα Θεοφάνεια και οχι το Θεοφανειο). Theofanio does not exist as a word!! Now - the translation of your entire text :


With high winds and drizzle we celebrated the day of Epiphany. At the church of St. George the council of churchwardens took care of festive decorations re-enacting the Baptism. However with the hymn "In Jordan the dove (symbolising Holy Trinity)" was reborn with the priest's rosemary and "flew away to the wellspring." The faithful queued with small bottles for their Holy water, while the churchwardens offered them home-made sweets and a little calendar with a picture of the church. At the same time our Philharmonic brass band was at the church at Potamos (12 kilometres away) for the ceremony of the Baptism, and if they make a great effort, will be in time for the 'cross-casting' ceremony at Ipsos.

I would suggest we need Friday 27th January at my kafeneion just before 1pm, when the bus gets there, and then after a beer we'll go down to my house for lunch and later you can catch the the bus back to Ipsos. We will speak nearer the time. With love, Aleko
***  ***
Wanting to see the sea I borrowed the car and drove to the shore and walked in the late afternoon and into the evening around Fort George, strolling with the dogs on rough salted turf, gravel laced with boulders, and sand, firm, smooth and wet, reflecting the sky... 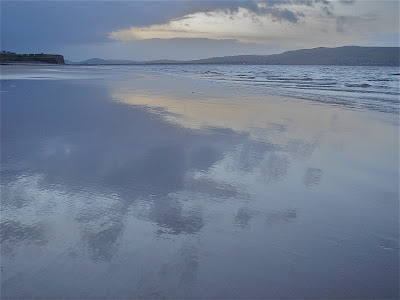 ...over the Moray Firth towards Inverness, the Black Isle on the northern shore of the firth across the horizon, Fort Rose hardly visible and the rampart stars of the garrison fort the English built to hold the Highlands after the '45.
Posted by sibadd