How can we plan for the unknown?

I find driving cars a little strange. I borrow them from others to do errands, now and then - like collecting shopping, taking my mother out, carrying slabs to our allotment. If there's anyone else to drive I let them - happily. Lin lends me her car -reluctantly - but having divorced my car at the end of 2007, preferring... 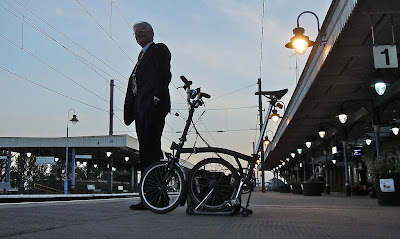 ...walking, cycling and public transport, with all the latter's inefficiencies in the UK, I'm becoming unfamiliar with the technology of newer cars - sat-nav, video to aid parking, caution icons that flash on the dash, voice sound warnings, anti-lock braking, all round air bags, sound systems of complex versatility and of course infotainment to keep drivers happy in their jams and the powers that be in better touch with what drivers are up to... I don't miss the car but I keep my driving licence up to date. 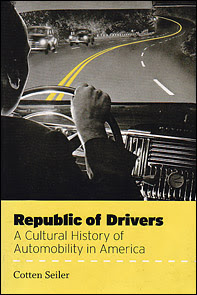 My interest was tickled by a book my friend Rick Risemberg, in LA, told me about the other day, having reviewed it in New Colonist, which he edits with Eric Miller:


Cotten Seiler ... in Republic of Drivers...examines how basically imaginary constructs of "freedom" were attached to and marketed with the car and car culture to compensate for the loss of control over their lives US workers suffered with the advent of industrialism. This was a time when "proprietary capitalism" (what we would now call entrepreneurialism, but was business as usual back when) was being replaced by "industrial capitalism," where workers became drone-like employees rather than businesspeople in their own rights. He outlines how car culture and highways also became mechanisms for imposing strict control through the use of this freedom imagery in the US. As cars morphed from artisan-crafted indulgences of the wealthy to factory-made products destined for the middle and working classes, so did regulation and restriction of motorists. Some of this was reasonable, of course: cars are dangerous and take up lots of space for roadways and parking; the first attribute leads to licensing and police oversight, the second to taxation. But rather than merely accommodating the car, as Europe did, America redesigned itself almost entirely around the private use of automobiles, inventing new and often emotionally-devastating urban forms such as the bedroom suburb, the strip mall, and the superhighway. These destroyed community and isolated individuals--within their cars while on the move, and within neighborhoods that offered no public space not reserved for cars when at home...

I was watching this programme of Jack's from the early 1980s. "A lady wrote to me and said 'We love the country. We'd like to drive down to the country at the weekend, but can you tell us what to do when we get there?' And I said 'Yes I can.'"
It's a part episode from Old Country, broadcast on Channel 4 in the early 1980s. Jack Hargreaves, my stepfather, had been presenting Out of Town on Southern Television for twenty-one years between 1960-1981.  Old Country has the same formula as Out of Town; even the same theme tune - Recuerdos de la Alhambra, but with Southern Television losing its franchise (Jack left before that happened) he was invited by Jeremy Isaacs to transfer Out of Town - a programme of proven success - to C4, which he did for three years with a new cameraman called Steve Wagstaff (Stan Bréhaut having decided to retire), and a new director, Steve Wade, who on leaving Southern had started working with David Knowles who'd set up a production company called Lacewing. They put Old Country together in the school house at Meonstoke in Hampshire, setting up Jack's studio shed there and visiting many of the people, places and subjects that had featured in Out of Town. In 1986 Jack got together with many of those with whom he'd worked at Lacewing to make a compilation of twenty seven old Out of Town films by Stan for domestic viewing on videotape and later DVD.
Over the last couple of years I've been striving to give these programmes a wider circulation; streaming, on Youtube and Vimeo, clips sent me by viewers who recorded them at the time of broadcast (low quality picture but I'm still immensely grateful for them). Until very recently it has been impossible to find examples of Out of Town - other than the DVD compilation of 27 archive episodes that J made in 1986, putting new sound tracks and commentary on Stan's silent location film. Even these were not being widely distributed. Then in late 2011, the distribution company Delta bought the licence to them from Endemol, and during 2012 will be re-packaging and making them more widely available through their outlets. And it has just become known that through the efforts of people at the unpaid body known as Kaleidoscope...

...thirty-four full-length original Southern Television episodes of Out of Town, not seen since broadcast in 1980-81, have come to light.
*** *** ***
I phoned the vet this morning and cancelled an appointment I made for an operation to neuter Oscar.


...castration for males' involving a general anaesthetic - a minor procedure compared to neutering a bitch. Both testicles are completely removed...

I read this on the practice website. The reason Lin, Amy (his original owner) agreed this should happen at all is that we have to leave Oscar - our esteemed, loved Jack Russell-Border terrier cross - with someone we trust while in Greece. Kennels are out of the question. Since we began to-and-fro  between Corfu and England John and Jo across the road have been his good keepers. They can't manage this any more. John's over 80, Jo's been ill....Taking him to Greece could only be by train (tricky) or car - with all the problems of jabs and the extra cost of travel and accommodation. Amy would have him with her menagerie of dogs and cats but - for goodness sake - she's expecting a child, our first grandson in March. Our Richard doesn't at the moment have time for dogs - though he likes Oscar well enough. Even so our daughter said she'd look after Oscar if he were neutered - so less likely, as he did last time he stayed at her home, to pick fights with her's and Guy's Brittany Spaniel, Malo. I arranged an appointment Friday morning. £114. Credit cards accepted. Then last night I had a word with John Rose, three houses down from us in Handsworth, who'd said a few weeks ago he'd take in Oscar if his dog, already neutered could cope.
"Simon" he said on the phone last night "Cut or uncut we'll have Oscar. Let's try him in our house when you get back from Scotland."
I was relieved; felt almost sure Oscar knew something was up...or not.
I rang the vet first thing this morning.
"No problem."
Sharon and Mum listened as I explained how I'd changed my mind. They giggled.
"So it's a man thing, Simon?"
"No no"
"Oh no?"
"No. Seriously. it's not like a vasectomy. Just a snip. It's gelding!"
They weren't convinced I didn't have an agenda.
A cold wind beat upon my window - wavering between snow and sleet, ice swift melting and sliding down the glass.

I've been on long walks extending my range around Brin Croft as once I did around Mains of Faillie where mum lived for 36 years, until Angus died...what seemed distant gets closer with familiarity as I try out different routes up and down the Strath. I've been leaving after 2.00, getting back well after dark round 6.00pm, on each occasion walking at least six, perhaps eight miles.

Yesterday the news reported gales sweeping Scotland, but they blew south of us. Here there was a breeze from the northwest to stir the tree tops but all the weather's beyond the hills. I walked, with the two terriers, Oscar and Lulu, south from Inverarnie near the river Farnack, until I joined the lower road that ran beside the Farnack before...

...turning a hairpin bend and climbing gently up the larger gravel road that began my walk back, north towards Westerlairgs - three miles as the sun left the light to a gibbous moon that showed shadows on the snow, and all I needed to see my way home. I was thinking of the endless stream of know-it-nearly-all pre-filed obituaries for Greece, the Euro and the Eurozone and the collateral harm prefigured, and Tony Scoville's gift to me of Deutsch's brilliant messy book The Beginning of Infinity, that passage that flaunts human ingenuity, progress, rationality - things put aside in the text ridden gloom - amplified by me and a million contributory blights, buzzing invisibly like highland midges. Deutsch, at one point, has a risky digression on 'optimism'.  He declares that one can always ask questions to resolve whatever issues arise, but the answer will often involve inventing a completely new paradigm.


From the smallest scale in our individual lives to the scale of civilisation as a whole, the growth of knowledge is profoundly unpredictable. We cannot even predict most of the problems that we shall encounter, nor most of the opportunities to solve them, let alone the solutions and attempted solutions that will be thought of and how they will affect events. Nor can we predict the probabilities of any of those things. In the light of this inescapable limitation, what is the rational attitude towards the future? How can we plan for the unknown?' David Deutsch 20 March 2011

24.10 "...the ineluctable and permanent fact of the human condition; that we do not know that which we have not yet discovered"
***** *****
I was pleased to hear from Patrick Field who teaches people - or helps them learn - how to ride a bicycle in London.

He's got a fine line in polemics on behalf of cycling in the city - or anywhere. He's just started a blog called own the road ~ Still dreaming of becoming a cyclist - which mixes telling pictures, in its first piece, of a smartly dressed cyclist in red tights getting about Sloane Square, with such insouciance you could imagine her, in another age, scattering gold coins to console lesser road users as she travels on her's and the Queen's Highway. Now on a bicycle she holds tacit assumptions, which Patrick gently deconstructs and applauds, which make her no less impregnable than she might have been in her ancestor's curricle passing through the same square over century ago, or a few decades later, a driver like my cheroot smoking grandmother at the wheel of her Renault EU convertible.