Beware the gentry when they get scared 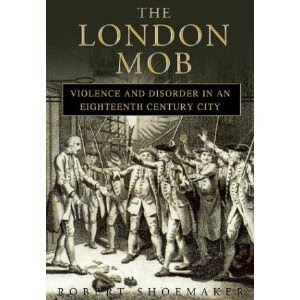 A man was shot by the police on 4 August. That's just under a fortnight ago. Time flies. I was in Scotland throughout the week of the riots that followed. I believe there was a small attempt at breaking into shops in Edinburgh, but since it was during the Edinburgh Festival passers-by thought it was a show, clapped, laughed but soon lost interest and the would-be looters wandered off empty-handed (none of that is true). When the real riots happened in London, Birmingham, Manchester and many smaller town centres across England it came as a nasty surprise. That something like this would happen was predicted; yet no-one guessed quite where or when. A week of rainless summer helped. It’s been known for a long time that while 90% of the population in the 1930s could be described as poor and some impoverished, that ratio has been reversed over the last 80 years.  In smaller numbers those left out are far less visible to those who aren't. They have no Dickens. They don’t look like the remote but regularly depicted victims of drought and war. Our 'poor' are easily put out of mind, ignored or if noticed mocked, despised and hated - the chavs, the lumpen. So when a mob forms from that 10% and behaves as mobs always have, many are surprised, even enraged - the property owning by the pillage, the politically engaged by the seeming complete absence of political awareness or motive among those in the streets. Herman Melville was disgusted and angered by the punishments meted out to seaman on US warships in the 19th century. Officers explained that character and behaviour of the men on their lower decks was so depraved and dangerous to the good order essential to the running of a warship that only regular doses of the lash could preserve discipline among them. Of this justification for judicial cruelty, Melville, who did not deny the ill-character of many sailors, observed ‘depravity in the oppressed is no apology for the  oppressor; but rather an additional stigma to him, as being in large  degree, the effect, and not the cause and justification of oppression’. I am, with a million others, incensed by corruption and greed - "absolutely appalling behaviour" - among the rich, made worse by the protection and assistance such people have been awarded by the governments of the West. I am as enraged by the arrogance of a Murdoch fils standing on a podium and repeating the ghastly semi-truthful imperative:


There is an inescapable conclusion that we must reach if we are to have a better society. The only reliable, durable, and perpetual guarantor of independence is profit

...arguing that the release of market forces, good for them, is the only guarantor of true freedom as I am by the vile materialistic mean-minded scumbags who ransack JD Sports 'teefing shoe' - such people need one another. One depravity matches the other. There really was collusion between gangs. It doesn't take An Inspector Calls to make such connections. These are  the first riots we’ve had for a long time which revolve around class rather than class and ethnicity – the latter actually a distraction from our understanding of the present driving forces, as is the reference to the few privileged perps involved (did they fail in the banking sector?). Before the term attached itself to journalism, the mob was called the Fourth Estate...


None of our political writers...take notice of any more than three estates, namely, Kings, Lords, and Commons...passing by in silence that very large and powerful body which form the fourth estate in this community...The Mob. Henry Fielding in The Covent Garden Journal (1752)

The mob played a significant if inarticulate role in the high-politics of the day, a cover for organised crime, exploited by privileged populists who knew how to work a crowd (see the Gordon Riots for a typical example).
Stop streaming  money into the areas where the 10% are concentrated into larger percentages and what happens, sooner or later, makes all the depressing sense in the world. Oddly I can’t blame Cameron. Wasn’t he the one who said to red-top ridicule ‘hug a hoodie’ - calling for more love to be given adolescents?


The hoodie is a response to a problem, not a problem in itself. We - the people in suits - often see hoodies as aggressive, the uniform of a rebel army of young gangsters...But hoodies are more defensive than offensive. They're a way to stay invisible in the street. In a dangerous environment the best thing to do is keep your head down, blend in. For some the hoodie represents all that's wrong about youth culture in Britain today. For me, adult society's response to the hoodie shows how far we are from finding the long-term answers to put things right,,, tough sanctions are still required for offending...crime cannot be excused, but...inside those boundaries we have to show a lot more love. David Cameron, July 2006

He’s had  to forget that now, but for a moment back in 2006, our PM, then Conservative opposition Leader connected to the lovelessness that exists between the better off and the unemployed unemployable. They are not easy to love. There’ll be lots of retribution now with the urban gentry keen to teach the peasants a fearful lesson. The suit in me says 'sock it to the little bastards'; the ragged trousered in me repeats Melville 'a man-of-war is but this old-fashioned world of ours afloat - full of all manner of characters - full of strange contradictions; and though boasting some fine fellows here and there, yet, upon the whole, charged to the combings of her hatchways with the spirit of Belial and all unrighteousness.'
Alongside the images of running figures silhouetted against flames and lighted shop-windows was a swift moving slide show demonstrating the ghastliness of our present urban fabric, something which added to the poignancy of collateral destruction to finer buildings - the multigeneration family ironmongers, the carpet store in Tottenham. [The clip I posted on YouTube below reveals an evolving series of images by Jorg Muller and Heinz Ledergerber made in the 1970s showing the relentless blighting of city streets (and country villages) as they are surrendered to the seemingly relentless requirement to serve motorised traffic.)

The pillagers were filleting car strewn streets blighted by ill-judged urban development, unimaginative design dominated by the drive to increase consumption, an environment as deprived of humanity as the looted monocrop spaces of modern agribusiness. This is not a Phillipic against shops or trading or the market. It is about the difference between a market economy and a market society.
**** ****

Last Sunday, Mike Tye, our neighbour and friend told me there'd be a peace rally in Summerfield Park as a show of public unity in the aftermath of the murders in Dudley Road and the riots of the previous week in Birmingham, London and other English cities. I cycled over with our dog Oscar and was there from start to finish. I saw Mike. I met up with Cllr Jon Hunt from Perry Barr who'd been stung by a wasp and guided him to the first aid tent, and I bumped into my old friend Poppy Brady who appears with a camera for a moment at the end of this clip. It was a good afternoon.

*** ***
Tuesday evening we were able to gather a quorate of the old Committee and members of the project's Voluntary Advisory Group members to make a tough decision about the future of the Central Handsworth Practical Care Project. The feeling of relief at the end of the meeting was palpable and as soon as business was completed everyone signed a birthday card for Linda - her birthday on Wednesday. 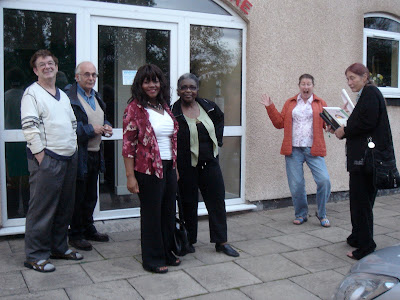