Somewhere in my youth or childhood... 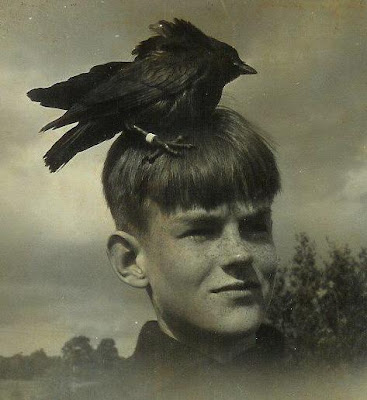 Of all the crows Jackdaws seem most to enjoy being close to humans. Jim was a great pet. Until he flew off to mate he was my mate. I found him as a fledgling fallen from his nest unable to fly and he stayed around with me for about 6 months in 1951 when I was 9, going on 10. My mum took this picture. Jackdaws enjoy playing with shiny objects and other small household items. This has given them a reputation as thieves. My impression is that they are actually always checking out whether this or that trifle might be suitable for a nest. The Jackdaw mentality in humans - in me - refers to a tendency to collect trivia in the fruitless hope that all may come together to solve the meaning of life. I got a circular earlier in the month from an English university asking if...


...you would put your name as a signatory to a press Open Letter on ‘the erosion of childhood’... The text of the letter is appended...the letter will coincide with the publication of a new book which I’ve edited...and some colleagues and I are founding a new ‘save childhood’ website, designed to help spawn a new grass-roots cultural movement dedicated to arresting the erosion of childhood....With warm wishes


...Our children are subjected to increasing commercial pressures, they begin formal education far earlier than the European norm, and they spend ever-more time indoors with screen-based technology, rather than in active outdoor activity and play....We call on all organisations and individuals concerned about the erosion of childhood to come together to achieve the following:
- public information campaigns about children’s developmental needs, what constitutes ‘quality childcare’, and the dangers of a consumerist screen-based life-style
- the establishment of a genuinely play-based curriculum in nurseries and primary schools up to the age of 6, free from the downward pressure of formal learning, tests and targets
- community-based initiatives to ensure that children’s outdoor play and connection to nature are encouraged, supported and resourced within every local neighbourhood
- the banning of all forms of marketing directed at children up to at least age seven.
It is everyone’s responsibility to challenge policy-making and cultural developments that entice children into growing up too quickly...


... there are antecedent arguments arguing rather cleverly and with supporting evidence that childhood was a Victorian 'invention'. If that was the case it was quite as brilliant as the steam engine and even more beautiful.  I like your letter...a brave sally against the seemingly relentless forces...that can't resist treating... children as consumers as well as ... innocent tutors of adult consumption.
I am sure you've been forewarned about the ingenuity with which children are harvested as shoppers - on-line especially - as well as primed for adult habits of consumption. I hope we might be able to attach to such actions some of the opprobrium associated with child trafficking, without weakening its present notoriety.
I'm sure you're right to emphasise the shrewd pursuit of all the banal ways childhood is eroded ('banality of evil'?). By referring to a 'culture' of resistance to the erosion of childhood you recognise the level of detailed attention this 'wicked' problem demands.
One hazard could entail being drawn into lobbying for a highly regulated over-protection of children; a direction which paradoxically adds to the problem -  keeping children indoors, too close to the world of adults and their entertainments.
One of the policies that must accompany the endeavours of adults to resist the erosion of childhood, is making the outdoors safer, and by that I don't mean safer from the statistically minor danger presented by predatory strangers (given most child abuse is committed by kin and trusted friends of kin) but from the daily hazards posed by motorised traffic in so-called public spaces. That's a hobby-horse of mine and I hope you'll not think I therefore assume speed-bumps will prevent the erosion of childhood, though they might make it easier for a particular child to get to a particular park on its own....Best wishes and power to your cause. Simon


Dear S. Thanks for this wonderful email! - and yes, being a non car-owning 'green' myself of many years' standing, I entirely agree with you about the car! - and I agree with all your other points, too. The signatory list is looking fantastic - and still a month to go...Look out for a big media splash around 24 September. All the best...

I spent some of Sunday afternoon working on our allotment, relaxing later at the park café so ably run by Mark Bent and his family who also help manage the boats that are now back on the pond. Even a few day's absence from the allotment, and weeds are working their way back even though there's been very little rain. Gardening is like childcare. Your responsibilities are constant and if I'm not there I need minders I can trust, but as well as the weeds our first crops are coming along nicely. We might be able to harvest corn cobs before the end of the month.
What's been especially good has been bringing Nick Booth founder of Podnosh - 'social media for social good' - to the Victoria Jubilee Allotments yesterday. Eleven years ago as a BBC reporter for Midlands Today he did a feature about the encroachment of building on allotments - Losing the Plot ... 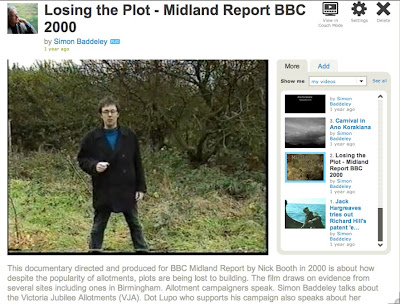 ...ending the 30 minute programme standing very close to where he stood with me yesterday amid our burgeoning plots chatting to me and fellow gardeners on the largest new allotment site opened in the UK since WW2 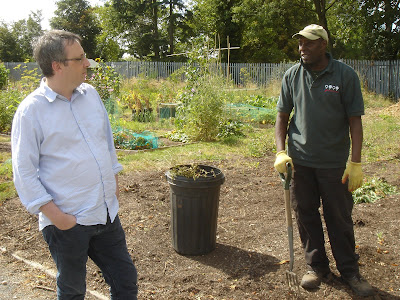 "You kids, stop playing idiots on my laptop!"
****** ******
I was asked by a friend of a friend of my stepfather's if I could stream a film of her late husband "inseminating a cow on Duncliffe Hill" and gladly obliged.

At 02.34 I recognised what is now our nutcracker made from one piece of hazel. 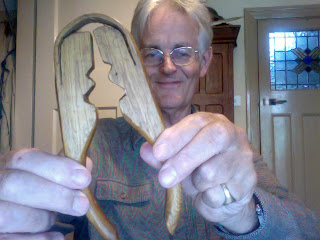 Jack: "We think we belong to the age of do-it-yourself; think we invented it. That's because we are are so utterly unconscious of our past, because for a thousand years everybody was almost entirely do-it-yourself..."
Posted by sibadd

Email ThisBlogThis!Share to TwitterShare to FacebookShare to Pinterest
Labels: erosion of childhood, VJA