After a morning and afternoon's paperwork, I cycled with Oscar to Plot 14 to plant the vine - Vitis Boskoop Glory -  I'd bought Lin for her birthday.
"What's the best way to plant this?" I asked Vanley
"Dig deep and wide. Put some compost at the bottom."
Danny's on the plot next door to Vanley. She gave me a bucket of manure "Mix it with earth and water them together but leave earth between that and the vine roots or you'll burn them."
So I dug a good sized hole and planted the vine by the shed. I hope it'll grow around a trellis I'll raise on a veranda frame for our shed. I damped down the turf I've started to lay in front of the shed on a layer of riddled earth.

During this time, the flow of information/news from myriad sources has, at times, been overwhelming in content and volume.  Other data on the events has been distorted, exaggerated and imagined.  There have also been times when the flow of new information comes close to standstill. Scenes from television programmes on the night the Birmingham unrest quelled.  The TV schedule for that evening included the usual pulp-vision; films such as “I, Robot” and “Alien Vs. Predator,” and an ITV Police Drama starring Caroline Quentin. Popular mantras seeded and perpetuated by news media through such events are referenced with disarranged subtitles.

[Here his images of Handsworth Unrest posted 9 Aug'11]
*** ***
I got a call from the council planning department this morning, took notes and circulated what I'd learned:


CURRENT POSITION ON THE VICTORIA JUBILEE S106A
I’ve had a 20 minute chat with Stuart Morgans this morning. Stuart is the Principal Planning Officer for this part of the City now leading on overseeing the delays in implementing the S106 Agreement on the Victoria Jubilee site. It seems things had slowed down with the retirement of the long standing officer Alan Orr who was Stuart’s predecessor, plus other staff retirements. The Council's Landscape Development officer in Local Services (Andy Hogben) has also retired; his job now done by Bob Churn (useful always to have these names and I’ll seek emails). Stuart and Bob between them have had a recent meeting with Persimmon's Technical Director, Simon McDonald and Cliff Nixon to establish an agreed way forward. The City Council's Planning Solicitor has reminded them of their legal obligations and the Council's powers to pursue legal action if the matters cannot be resolved. Stuart said the meeting had achieved some effect and Persimmon have expressed their commitment to get things completed. Persimmon are keen to fulfil their obligations and get clear of the site. They are however pleading economic pressures and the fact they have already spent more than what was in their pot to fulfil this particular S106 Agreement.

1. The allotments: There are a few minor ‘snagging’ problems to be sorted before the City Council can sign off the works. There’s nothing too serious needing doing now and problems, including one of rain run-off on a sloping area of the car park, should be dealt with in a couple of weeks.

2. The children's play area: The play area if built to current spec by a contractor on the Council's approved list would be far more than Persimmon state they can afford. They have suggested using one of their own contractors to do it for less. From the city’s point of view agreeing to a contractor who is not on the approved list could raise potential quality control issues and they don’t want to create a precedent developers could exploit in future agreements of this kind. However, the contractor has been working with officers to demonstrate that they can provide the required quality, and Stuart is awaiting confirmation from Bob as to whether they are agreeable to this compromise. Progress here is also complicated by the opposition of a number residents on the Parklands estate to having a playground near them on the grounds it could become a security risk. 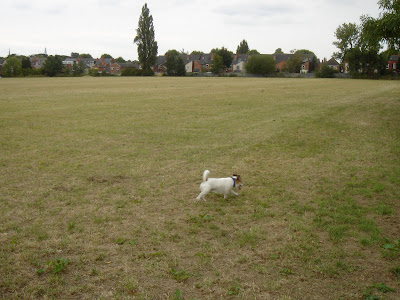 3. The playing pitches (photo taken this morning from the allotments): On the subject of the playing pitches Stuart says the area in question is currently mowed. There are ‘technical issues’ relating to the cricket square that have been identified by the parks manager. It must be regraded and re-seeded, There must be a period of time for the land to settle and be ready as working playing pitches. Gillian Dovey is the officer in the City’s Education department with responsibility for overseeing the handover to the city of this facility. Her view is that it is pointless for the City to accept the playing fields unless the sports pavilion (with changing rooms for both sexes, plumbing, toilets and electricity) is ready. Persimmon cannot afford in the present economic climate to build any of the recently approved designs. It is also agreed that in the light of recent events, that whatever is built needs to be ‘robust’. Stuart says it will be a ‘basic’ building with the necessary changing facilities, but designed to be robust to vandalism. Gillian is ready to accept the situation and has submitted a suggested revised spec for the pavilion to Persimmon. They have appointed contractors to assess what's involved connecting it to power, water supply and sewer. Persimmon have agreed to prepare a new design and to get this costed with a view to having contractors on site this Autumn if possible. I asked Stuart for a judgement on when he thought the playing pitches would be available. Could they be ready by summer 2012? He said it might be safer to say by 2013.

I was grateful to Stuart for his detailed frankness. The delays and the reasons for them are by now familiar to me, They applied to the allotments which most of us are now happily working, even though officers would agree the land was not in the best condition at the time we started paying for our plots. At least that part of the site Is being worked as allotments. Indeed those of us who’d been lobbying for the allotments pressed officers to ensure that happened, saying, more or less, that we would be responsible for top-soil shortcomings, just to get on site and get gardening. Obviously circumstances are different when signing off playing pitches, We could have still worked plots without the communal shed valuable though it is. But using the playing fields with at least changing facilities is far less acceptable. So there you have it. Best wishes

At that time I wrote: S106A = A section 106 Agreement, otherwise known as a 'Planning Gain Agreement' - by which a developer, in return for planning permission to build private homes on an area of green space, agrees to give a benefit back to the community equal to the opportunities lost by the removal of that space for leisure and recreation. It may just be that by August '08 we shall see work starting on the sports pavilion on the old Victoria Jubilee Allotments site off Hamstead Road. (The homes here have been built on part of the site. In return the developer - Westbury Homes and then Charles Church - will fulfil the contract of a planning gain agreement with Birmingham City Council). On Tuesday morning 20 May '08, this site-meeting on Parklands Avenue with - left to right in my photo - Cllr Mahmood Hussain, residents who I've not met yet, Cllr Kim Brom, Alan Orr our Constituency Planning Officer, my good friend Liz England from the Handsworth Park Association and Basil Hylton, Chairman of Handsworth Cricket Club and Frank James, Basil's representative on the park committee*. Alan said he'd met the representative of Charles Church, the developer of the housing on the site, and that he had agreed with Alan that the 'trigger' point for implementing the terms of the Section 106 Agreement on the VJA site had been arrived at. Sales of new homes on the site have been given impetus through affordable housing schemes overseen by Midland Heart, a locally prominent registered social landlord and Housing Association. (There is already a growing residents' group on Parklands - the name of the new housing). In other words we are now about to get the 80 new allotments, cricket pitch, two soccer pitches, sports pavilion and children's play areas. I will be sceptical up to the moment I see the work beginning but it was a good meeting.
Background.  Other images. Follow up correspondence.
*Since 2008 Liz has died, one councillor has resigned, the other de-selected, the planning officer has retired and Basil is no longer active with the local Cricket Club.
Posted by sibadd