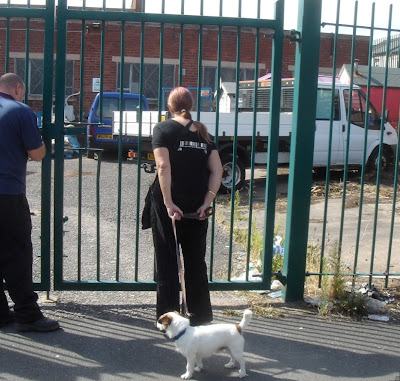 Friday saw the Project's tipper truck securely stored at last. This gives the Voluntary Advisory Group, delegated responsibilities by the remains of the old project's management committee, time to formally clear any outstanding sums owed -  reduced over preceding months to a manageable sum - and get on with setting up a proper legal entity - probably a Company Limited by Guarantee or a Community Interest Company - so that a new enterprise can be up and running before December, using the vehicle and machinery of the dissolved project. It's been a slog. The truck's ready for re-use but we still have to recover a rich variety of machinery including a chipper, chain saw, strimmers, mowers, picks, stepladder, spades, shovels and crowbars. Some of the trickiest part of winding up the project, drawing a line under the past is now behind us. Now we have the challenge, in tough times, of restarting it as a transparent accountable enterprise fit to earn money where that's appropriate, and apply for grants - increasingly rare - to help do an endless range of odd-jobs - garden clearing, window and lock repairs, house clearance, removals - to name a few - for the most vulnerable people in Handsworth, as well as communal tasks like litter picks, clearing those urban dead zones beloved of fly-tippers and cutting overgrown foliage by footpaths and alleyways.
*** ***
An old lady, Rodo Metallinou, Ρόδω Μεταλληνού, sits at her window in the narrowest part of Democracy Street - if you ignore the stretch where it runs through Venetia half a mile further up the village. When we pass she smiles and waves, crying out - γειά σου, often adding further blessings we still don't always understand. I admit to peering through her open window at the dark varnished dresser with its shiny decorations, gleaming cosily on dark winter evenings.
An entry in the Ano Korakiana website shows Rodo sitting beside our neighbour and friend Mark Jacks, showing her an old black and white photo - η παλιά φωτογραφία - a gathering of her fellow pupils at the village school in the 1930s, an image that might have been thrown away or simply allowed to decay in some abandoned room. Here they sit together as she happily recalls names, nicknames - τα παρατσούκλια τους - and old faces. Mark wrote:...she was sitting on the step with the photo when I happened by and she was talking to a man with a beard who took the photo , I  asked her which schoolgirl she was in the photo and she pointed herself out to me and then burst into fits of laughter ,1930 she reckons , great stuff.  loved the 15 minutes with her and her neighbours,
** ** **
Mark Taylor, a members of my informal JH committee, helping me search for Jack Hargreaves' programmes between the 1950s up to his death in 1994, sent me an old VHS tape of a broadcast in which Jack speaks a commentary written by his colleague and friend Colin Willock over a film about another friend, James Robertson Justice. Tony Herbert took Mark's old tape and transferred it to DVD so's I could float it on Vimeo. The Angler and The Trout appeared in Anglia Television's Survival series, invented by Aubrey Buxton, and broadcast  13 February 1974. Comparing it with one of Jack's films about fishing, made in the early 1980s, it is ever so slightly bothering to hear the shift in rhythm and flow as my stepfather recites someone else's words while different hands and eyes stand behind the camera, sit at the edit desk and insert background music and sound effects. I guess it's a reminder of how much more familiar I've become with JH's material in the last couple of years.