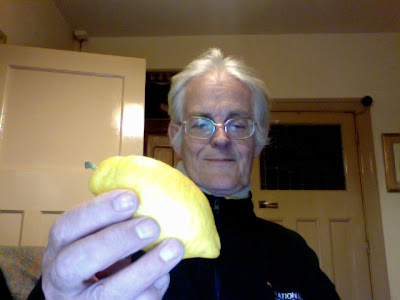 Linda went to see her parents in Cannock on Saturday, taking oranges and lemons from our garden in Corfu. Dorothy, my mother-in-law, eats lemons as I eat oranges. I've been working on my diary for our fortnight here - see the dentist, the doctor, do two pieces of work for the university, visit Darlington to borrow Mark Taylor's VHS tape of my stepfather's programmes and get it digitised, possibly by Tony Herbert, one of the members of the informal 'Jack Hargreaves Committee' I've convened - over the internet; visit Richard and Wendy Hill in Havant, do work on our allotment and on our garden, lead another history walk through Handsworth Park this Sunday (last year's walk).
This afternoon I cycled into town to run through a list of errands, after a morning of on-line work on my correspondence. How I sympathise with the hard bitten hero in those cop procedurals who has to do routine paperwork to fend off station bean-counters. Lin spent yesterday and last night doing the same - insurance, tax files, bills that come by post, and a phone call or two, one to tell us a neighbour of thirty years had dropped dead of a stroke a week ago. In the midst of the routine our lives are leavened by visits from our daughter, while our son and girlfriend make us a supper of bangers, from Bowketts of Oldbury, and mash with fried onions, fresh leeks and some red wine.
In town I went to the market to have a baked potato, buy bird food, a new pair of cheap shoes, then to busy New Street Station to get pre-booked rail tickets to London, Darlington and Havant and finally to Illingworth's in the Western Arcade to get my Tor Oriental cigarettes - dearer than my new shoes. But before that I dropped into the Apple shop to see if there was news of Niko, our Greek teacher. I asked an assistant who pointed behind me and there  he was - "my first day back at work" - after just returning from caring for his stricken mother in Athens. He gave me hurried news, said he'd be in touch tomorrow. we embraced.
****
There was a public meeting in the village council on the 19 March to discuss the proposed windfarm - αιολικού πάρκου - on Trompetta and its repercussions for the village and its surroundings. In a packed room discussion began after a briefing from President Nikos Metallinos, followed by the Chairman of the Council Spyros Thymis:

A unanimous resolution was passed expressing Ano Korakiana's opposition (widely shared on the island, though not so much by me) to the imminent installation of wind generators, cables and substations, regretting the support given the project by the Municipality Corfu and the Regional Authority. I don't want to oppose renewable energy technologies despite recognising the immensity of the project and the enormous amount of road activity that will go with building the farm. We both assume that traffic will not try to pass through Ano Korakiana via Venetia and Sokraki but will ascend the mountains via the Trompetta road beyond Skripero off the main road to Acharavi and Roda - but who knows.
***
Though the whole is not to be missed, the second verse in the poem To live - Ikiteiru - 生きる - by Shuntaro Tanikawa contains the gem...meeting all kinds of beautiful things, and rejecting carefully the hidden evil...kakusareta aku wo chuuibukaku kobamu koto - to ferret out whatever evil may be hiding deep withing us

I can't read the Japanese. That's where the web is so helpful, allowing me to tease out different versions and interpretations. How this couples with Cavafy in Ithaka:

The Lestrygonians and the Cyclops,
the fierce Poseidon you will never encounter,
if you do not carry them within your soul,
if your soul does not set them up before you.

'What should those who aren't in the afflicted areas do now?
I think they should keep living their life and work as usual.
The administrations will decide the policy and we just need to help following what they say.
First of all, our daily life is our priority.'


Our dear friend Eriko, my student for a few weeks, brief guest in the Highlands, writes from Japan:

I really appreciate your warm message, Simon and Linda. It reminds me of peaceful and tranquil landscape in Inverness as well as your hometown in Birmingham. How are you, your mother and your children? Thank you very much for your consideration to us. As to me, my family and relatives, they are all safe and sound. So is Hitomi. When the quake hit, I felt the quake my office room on the sixth floor. It was a long and lateral shake. It did not damage or slant anything but my  colleagues and I were a little upset. The office building is said to be one of the most earthquake-resistant buildings in Nara prefecture so I was quite certain about safety and stability. Later I looked through the window on Todaiji temple and surrounding houses in order to make sure nothing was torn down. Finally it turned out there was no destruction within the prefecture. The news of a female local govt employee in Eastern Japan in charge of disaster prevention kept warning local citizens to evacuate before tsunami came. As a result she sacrificed herself, was washed away and has not been found yet. This news made us - me and my colleagues - extremely sad. At this time, There is a mixture of peace and unordinariness in Kansai region. I hear, in my flat, high school students practise club activities as if no dreadful incident had happened. Public transportation is smoothly working without any delay or absence. Consumption of water, gas and electricity is not restrained. However, in shops of daily necessities, torches and batteries have been sold out and bottles of water and towels are scarce. This is because people in Kansai who have relatives and friends in Eastern part of Japan bought and delivered the stuff.  Not to change the subject over two days I have attended a seminar for a licensed English guide. Did I tell you that I had passed the exam? It does not mean I will change my jobs in the near future. It will require another several years or more till I make a decision so I will only broaden my experience and try to absorb as much as possible for the time being. The seminar took place in Kyoto and attendants went around major tourist destinations and learned fundamental things for good guiding. Tourists are comparatively fewer than normal years but they looked unworried and fairly comforted. Some were from Tokyo Metropolitan Distrct and they said they felt very relaxed after several days of unusual tension. It is like two different countries existing on the same island. What I can do at the moment is to keep following the news and update me with the latest need so that I can be of any help. Besides, I am currently commited to the charity music concert held in McDonald in April. I will let you know how it works out. Once again thank you so much for sending us your condolences. I am deeply grateful for it. Please give my warm regards to your beloved. Eriko.

Dearest Eriko. We are so pleased to hear from you. I read a poem 'To Live' and a comment after it by someone in Japan 'What should those who aren't in the afflicted areas do now? I think they should keep living their life and work as usual'....My mother is fine and so pleased to hear from you. (I phoned her when your email arrived). She sends you love - as do we. 'There is a mixture of peace and unordinariness' 'two different countries existing on the same island.' This is so strong a description of how it must be. I'm going to the dentist on my bicycle and then I shall do some work in our garden. But I cannot write more as I am so happy to hear from you crying with a mixture of happiness (at hearing from you and of Hitomi) and sadness for Japan. I have also heard from Sachiko Imai and from Taka and they have given me news of others being OK. XXX Simon & Linda

Hello Simon. Sorry for delay. I haven't kept in touch with other Japan programme members much. But they might be all right because they were not from these prefectures which suffered terribly by this disaster. I think medias in foreign countries now are focussing on nuclear problems much. I'm not sure how it will be going but it looks like getting better. This occurred mainly because of power supply's cut off. This caused cooling pumps and water circulation system stopped. But TEPCO (Tokyo Electric Power Company) looks like making progress successfully to revive power supply. Cooling pumps may work soon hopefully. When they can start cooling nuclear fuels, it will become safer again (but it takes over 10 years to stop and cool nuclear power plants completely and we are in danger until that). Still tens of thousands of people are missing and over 300 thousand people are finding shelter. It may take over a decade for these areas to be reconstructed. Also, around Kanto area, we got planned blackout and this may make our economy deteriorate. As a result of this accident, lots of Japanese people are changing their  minds and thinking nuclear power plants are really dangerous. But it's very difficult to stop all of them. They generates almost 40% of electricity we need in this country. TEPCO may restart disengaged heat power plants. But they can't generate enough electricity and it takes years to build enough solar or wind power plants instead of nuclear power plants. We stand at a crossroad now. Best wishes Taka

The relentless process of clearing soil, turf, flowers, shrubs and trees from front gardens in our road continues - this time two doors down from us, our neighbour, with his growing family needs more parking space for his work van - he's a central heating engineer - and yet more cars; a growing three, even four car family. 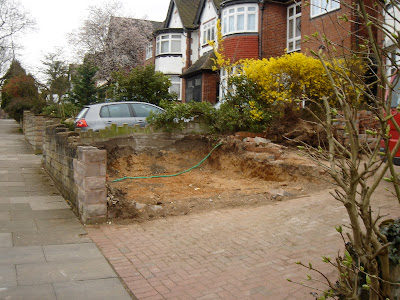 While our garden has a driveway for one car, with room for a visitor (I divorced my car three years ago), absorbs gallons of rain and is showing all the signs of spring growth, this garden - no longer a garden but a frontage - adds to the accumulation in the city of sterile hard surfaces - crazy paving. There had been talk until recently of planning rules to discourage this but under the Coalition government this becomes an imposition on the individual; an interference in private space. The idea that  reducing the risk of flooding might be a public good has exit-ed left. I've noticed there are loads of grass-paving options available which allow 'green parking' (not to be confused with parking sites which give concessions to 'greener' cars or an excuse to lay temporary mat on meadows) for cars and even heavier vehicles. Just try web-searching for 'grass driveways'. green driveways', 'turf reinforcement', 'porous grass paving grids'. 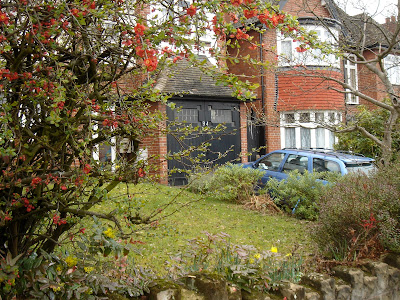