It's still winter on Democracy Street

Firewood that I cut in October and stored in the apothiki is dry, so, with help, I barrowed enough for two days' heating to below the balcony and hauled them up on a rope and stored them in a box beside the stove, with another load stacked under cover just outside on the balcony.

The water was reluctant to flow from the shower. I recalled the stopcock beneath the utility room sink. It was jammed. WD40 applied. Next morning bent double and reaching through a cupboard I managed the tiny twist needed to get a good hot shower. The small garden is getting attention. Enough plaka’s been recovered from various places for Lin to finish the path out of the garden gate. “My plants are taking good root. Look here and here.” She shows me plants that will flower in a month or so. 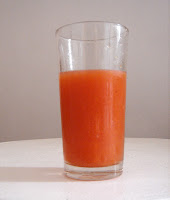 The lemon trees bear hundreds of fruit as does the blood orange tree. I’ve made a jug of juice from the windfalls of two days. Our days so far have been warm enough to dry our washing in the sun, bringing it in at dusk to dry anything that needs it in front of the stove.
** ** **
I’m trying to get my head around the Localism Bill trawling colleagues thoughts in their February Report The World Will Be Your Oyster: Perspectives from the Institute of Local Government Studies (INLOGOV). It’s a struggle to find perspective. I’m trawling through others’ chapters annotating parts that catch my attention.
I’m doing the same via Athens News wondering how things are in Greece. That should be no different simply because we're here, the web having provided a stream of information – text, images, film – about Greece, Corfu and Ano Korakiana. “Reading your blog” smiled Mark the other day, when as usual we were using his and Sally’s WiFi “you seem to know more about what’s going on around here than we do.” Hm. I still haven’t made much progress reading island politics despite a diagram drawn for me by T. last time we were here.

I have this insane idea when I arrive at a cherished place that it will not have changed; that we can continue from where we left the last bookmark. But the consequence of going to and fro is to have missed important episodes of Democracy Street. Sometimes it's buildings – like the new hospital at Kontokali, at last up and running, or the steady progress of work renovating the Music School below Venetia in the village. There may be lost trees; people who are absent who we’d expect to see sitting in the winter sun at noon, and others who are there, where they ought to be, greeting us. We value the gossip, yet are apprehensive. It's a relief to find people we know are well but we also hear of people who’ve died, of people unexpectedly very ill. An email from America, from my old friend not seen for 45 years, who was joining us here for Easter, says he and his wife must cancel their visit to Greece this year. His brother-in-law has pancreatic cancer; only months to live, not wanting to 'waste time' on chemo. We hear from our neighbours of such news closer to home.
My half-brother once muttered to me, as we – young parents with our companion wives and beloved children – trailing in front and behind, walking across the apron in Athens for a flight to England, after a family get-together combined with a holiday in Pylos with travel through the Peloponnese, “One day all this will end.” Yes indeed and thank goodness. How could one savour love, friendship and every ingredient of joy and desire, without the constant awareness of that simple fact? It's why I try to be less free with my camera, lest thinking a moment can be captured in a box I give more attention to preserving it than living it. A wise thing I’ve come across recently in Hurley’s aside on p300 of my p/b copy of his One Under:


The best writers are ghosts in their own lives. They dwell in the shadows. They watch. They listen. They remember.

A few lines earlier, back a page, Hurley has the same character’s comment on a would-be writer:


“...he had no sense of completion. The best writers have a sense of wholeness. Their books are no more than metaphors. There’s a circularity, a feeling that events are feeding off themselves, pushing a story forward, yet reinforcing something important that’s happening underneath. It’s a very hard thing to out into words, which I guess is why there are so many crap writers around, but what I think it boils down to is that these people have well and truly got it together. They’ve had a bit of a think about life. They’re sure of their bearings. They’ve got the measure of the raw material that goes into the book…"

My stepfather, writing and live in front of a camera in a studio shed and in his live commentaries over the intervening films shot by Stan Bréhaut and his more temporary successor Steve Wagstaff, achieved this.

In One Under Hurley’s character doesn’t mention knowing how to write English. Perhaps a grasp of the infrastructure of writing – its grammar – is a taken-for-granted essential, as with musical composition, iron moulding, stone masonry, wood carving, glaze and paint. These are media humans have struggled with for centuries. JH’s talent lay in his grasp, before it became codified, of the grammar* of a new medium – not just text to screen, nor a version of cinema, more like radio for being live – his preferred style of broadcasting on television. Had he not made his name in radio in the 1930s, then, before D-Day on Montgomery's staff, been involved in the ingenious multiplicity of deceptions aimed at confusing German intelligence as to where the allies would land, and as the Allies advanced through France and the Low Countries, discovering and taking over enemy broadcasting stations set up in the lands they’d occupied and broadcasting back - often, so he told me, relying on technology superior to ours, morale depleting duplicity, in word and song, to their retreating soldiery. He was, with his companions, one of those whose entertaining trade, never overtly political, was spiced with the product placement of democracy - deadly serious persiflage. Graham Hurley in an email to me last May, containing more, wrote:

It was this wonderful marriage of fact and fiction that made him such a great broadcaster (and inspiring boss).  Like so many men from that generation Including George Egan, who flew SOE agents into France aboard tiny Lysanders),  Jack been through something infinitely bigger and more scary than any of us would ever find in television and it gave him a breadth and a perspective and a degree of creative mischief that was utterly beguiling. I put a number of the Out of Town programmes onto tape (Stan shot mute film;  Jack's studio musings became the sound-track) and after a while I began to spot where fact strayed into fancy. Viewers, and gobsmacked youths like me,  loved him. Like Stan, truly a buccaneer.

* Long ago Jack gave me Davis & Wooler's 1960 slim illustrated book The Grammar of Television Production
***** ******
Skyped my mother in the Highlands and had my wrist slapped by my son, up there a week, for my preoccupation with the medium rather than the message, Emma laughing. 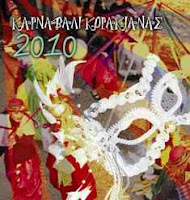 News of a new DVD about Ano Korakiana's Carnival 2010 with the event's history going back many years, is published on the village website ... Κυκλοφορεί από σήμερα (επιτέλους!) μετά από κυοφορία δύο περίπου μηνών, το νέο DVD της Επιτροπής του Κορακιανίτικου Καρναβαλιού, με τίτλο «Καρναβάλι Κορακιάνας 2010», με πλούσιο φωτογραφικό και ηχητικό υλικό, καθώς και video. This year's Carnival, if we've understood right, occurs in the first week of next month - I presume on Sunday 6 March 2011. (23 Feb '11: Whoops! Just saw a notice in the village - its next Saturday 26 Feb!)
And a nice review in the TLS of Jim Potts' book - out a year now - The Ionian Islands and Epirus. A Cultural History. This now sits in our loo as a book to be revisited - regularly, while Richard Pine's latest op-ed in The Irish Times argues that 'The Greek leader seems to be acquiring the ruthlessness he needs to tackle his opponents.'


...There is widespread, if grudging, recognition of the fact that, with the possibility of stretching the pay-back period of the bailout, Papandreou, and his finance minister George Papaconstantinou, have got the measure of a Europe which otherwise would be shaking the Hellenic hound by the scruff of its neck much more viciously. Papandreou’s ability to come to terms with an otherwise anti-Greek Angela Merkel puts down a marker as to whether or not Greece sees its future in Europe – at least on the terms dictated by the centrist states. But there’s the rub: Papandreou wants to create a modern Greece that will be western-looking and European. The dissidents he would like to be rid of are of the old school which insists there is a Greek, rather than a European, solution to a Greek problem. Papandreou has little choice but to be brutal if his reforms, amounting to a reconfiguration of Greek society, are to be successfully implemented. But election or no election in Greece this spring, eyes will be concentrating on the change of power in Ireland, not least in regard to the issues of transparency and clientelism.

** ** **
Today we have rain which at least will clean the dust away after I've been using the angle grinder to tidy the latest plaka Lin's laid in the garden. 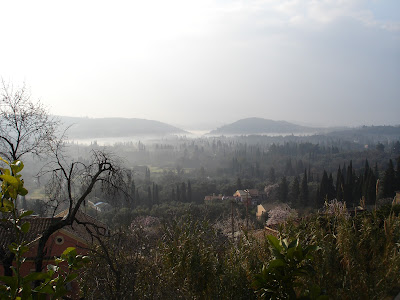 Buttered toast, marmalade and a big mug of tea
Posted by sibadd