Edmund and Chris in Handsworth

I’ve edited down the film I made of Edmund Branch and Chris Hryniuk at work, over a day, for the Central Handsworth Practical Care Project in the last week of January to what I hope is a handy six and a half minutes. I think I’ve conveyed something of the variety of the things the project’s been doing for people – especially the old – in Handsworth. I’ve got Edmund and Chris emptying a house after someone’s died, taking rubbish to the tip, other things for the Red Cross shop in Newtown to sell, and things kept back to pass on to people Edmund knows need them like a sewing basket, washer, books and an electric kettle; noting requests for further work; clearing items from the home of someone recently widowed; moving earth on an allotment – ours – to help create a base for a shed on the VJA; cutting back overhanging branches on a public footpath. Some of this work is done free which is where a challenge arises as the Project will need to find new sources of money to support this, and some like the house clearance and the allotment work paid for. The film is in part a small tribute to Glynis Foley, the project’s manager almost up the time of her death last year. I’ve known Edmund in passing for years and argued with Glynis at local public meetings for nearly two decades. (Many thanks to Mark and Sally for letting me spend hours on their WiFi downloading this film)

[16 August 2011: I have made this film private. The project is about to be wound up and a new one started. Until this happens I thought ti wiser to take this film off the web. More explanation later
July 2012 and it's public again with CHPCP replaced by Handsworth Helping Hands]
I’ve made the film for my own enjoyment but also as publicity to assist fund raising, now that neighbourhood funding from Birmingham City Council has more or less dried up under the Comprehensive Spending Review. Bills for running costs – road fund licence and insurance on the truck, insurance on the chipper and other tools, employee insurance and so forth – are due to be covered by paid work, and the more that becomes the case, the more difficult it will be to continue to carry out a host of small repair jobs and other errands for pensioners living on a pittance. There are a good number of white van businesses in our area doing a host of odd jobs, but very few if any doing a significant proportion of those for free, nor do those involved have anything like the first-name knowledge of people as Edmund who is known, liked and trusted by so many across Handsworth.
***** *****
At 208 Democracy Street the wood from the neighbours' building garnered in October is keeping us warm by night. The sun keeps us warm by day, jocund breezes blowing the damp from our washing. 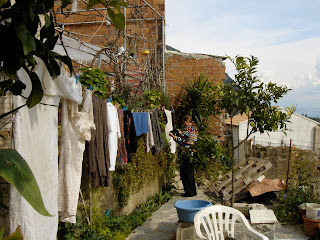