Befogged in Venice we met people also awaiting passage south. One fitted the picture of a Greek citizen I’ve only read about. His parents had been on the side that lost in the Civil War and earlier in the resistance – “my father, part of the andartiko” - exiled to iron curtain countries, brought up doing Marxist-Leninism at primary school, disallowed Hellenic citizenship until the 1980s, acquiring Bulgarian and other middle European languages alongside his parents’ Greek, serving in the merchant marine, marrying an Englishwoman, living in the Midlands, eventually being able to come home with full citizenship. A novel biography. We ate and drank together in a pizza place on Lista di Spagna and talked – a lot. The wife is English with roots in Poland, not speaking her birth language. “He taught me to speak Polish” she said. We joked at our struggle to learn Greek. “It’s difficult,” she said “I thought I’d never get it, then one morning I woke up and I could speak Greek.” We wish. Oh how we wish.

Our hotel was phoned before first light; the fog cleared. We joined the ferry and stood on the top deck looking at the passing scene as with the help of a squat tug, occasionally churning mud from the bottom of the canal, our ship headed out to sea, the deck speakers streaming multilingual safety instructions between bursts of muzak while all who needed to hear were focusing on watching and photographing the city - La Serenissima.
*** *** 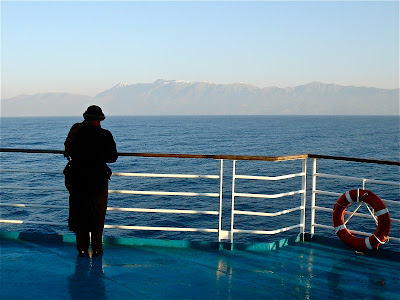 So we're in Ano Korakiana again. The ferry, a rattling behemoth, dropped us in Corfu in weather too warm for the clothes we'd worn for the chill at dawn as we rumbled by the snow topped Albanian mountains south of Vlorë under a clear sky, the smudge of Erikoussa of the Diapontian islands, looming first to starboard and soon the familiar shape of Pantokrator, strewn across the dawn horizon. First we met Yianni who was waiting with our car. Stop. First I put a hand flat on the concrete jetty to touch the blessed place and saw a text on my Greek mobile from Paul and Lula “Welcome home. X.” 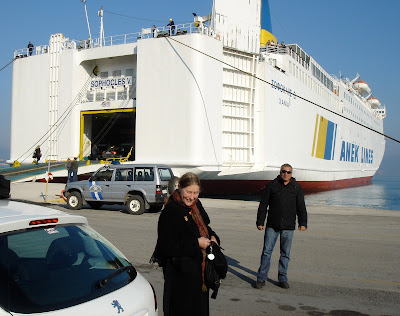 
Re: Jack Hargreaves. Hello, Simon. I am sorry to have taken so long to reply (I have only just gone on-line and seen your message) and to have to disappoint you but I no longer have the video recordings. Some time ago, the tape had disintegrated to the point where it was not only unplayable but un-repairable as well and I threw it away, albeit very reluctantly, along with several other (unrelated) tapes. I can assure you that if I had thought that it could possibly have been any use, even if only in part, I would have kept it and would have been delighted to be in a position to pass it on to you but I am afraid that this is not the case. I do hope that you will have more success with your search elsewhere. I can't believe that I was the only person to record some of the episodes and, with a bit of luck, someone else has and subsequently took better care of the tapes than I did. You know better than I what a great man your step-father was. Not only were his broadcasts and books a pleasure but also an inspiration to me and, no doubt, a great many others. All the best. Paul Chignell