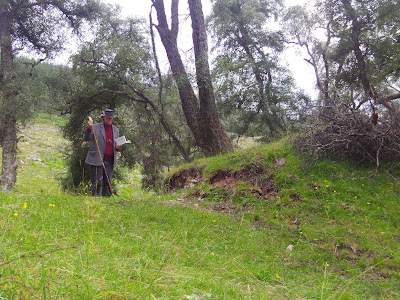 I've been reading and re-reading Cavafy's poem Ithaca in Greek, helped by a recording that I play over and over. It's at first almost impossible, even when I can make out the words in my head, to actually begin to speak them. It's not that by now I haven't understood the Greek alphabet. The challenge is getting first my ear, and then my unaccustomed tongue and palate, around Greek consonant and vowel combinations. Take 'βγεις'. In Greeklish this is probably best spelled as 'vgees'. Oh and why doesn't it have an accent? There's a rule on that which I keep forgetting; or take 'εύχεσαι' = 'efkesay', or 'γνώσεις' = 'gnosees', or 'πνεύμα' = 'pnevma'. Greeklish doesn't convey the right way to say such words.

In English we've lots too - 'st', 'ps', 'gr' for a start - ones I've been using for over half a century - and ditto with vowels, where, for instance, the same combination of 'ei' can be pronounced or not pronounced in different ways with no rule other than having to learn every unique instance. Phew.
With 'βγεις', you have to start with the 'β' but, like letting out a clutch, not slipping and revving but sliding smoothly into 'γ'. The Greeklish version doesn't help, nor any Latin phonetic - though it might be an aide-mémoire. The fact is mouth and ears must learn new routines; ones that get trickier with age. Take 'gnostic'. In English you ignore the 'g' except in the spelling and say 'nostic'. In Greek a word like 'γνώσεις', you must pronounce 'γν' as two letters, and not like 'gn' in 'diagnosis', but, as I described it, having a go at 'γ' but gliding swiftly effortlessly and seamlessly into 'ν'. Niko has asked me to read the poem from the book and send him a sound file of the first dozen lines of Cavafy's poem* with the transcript below based on Antony Hirst's recovery of Cavafy's originals.

When you set out on the journey to Ithaca, pray that the road be long, full of adventure, full of knowledge. The Laestrygonians and the Cyclopes, the raging Poseidon do not fear: You'll never find the likes of them on your way, if lofty be your thoughts, if rare emotion touches your spirit and your body. The Laestrygonians and the Cyclopes, the fierce Poseidon you'll not encounter, unless you carry them along within your soul, unless your soul raises them before you.
*Apologies to all Greeks.

*** ***
Of a sudden Brin Croft teems with small young people. Nephew-in-law (is that the term?) and niece, Kalvin and Emma, arrived with their new children Jacob and Edward, on the sleeper from London, invading with greetings, squeals and pattering feet, and I'm sleeping across the yard in the log cabin; Oscar too. 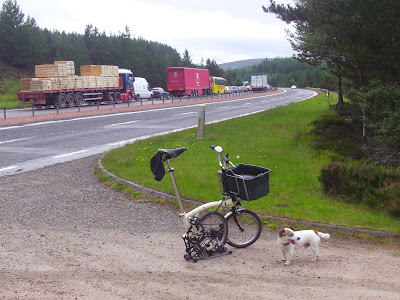 I cycled to the Moy Fair on General Wade's military road, a gravel track that at places parallels the A9 where I spied, with cyclist's irritating schadenfreude, the queued traffic while I pedalled through woods up and down congenial slopes, Oscar running beside, until the last mile where he jumped back in his basket to join the main road and I threaded a mile of almost stationary traffic. A driver in a red van leaned out and complained in obvious English "You trying to get yourself killed?" "Och! Gai haim to yer own country sasunnach" I mouthed - a racist line stolen from YouTube via Corfucius. We exchanged customary Vs as I left him behind taking an almost invisible footpath that leads through the steel barrier down an embankment to the old A9 and Moy House. 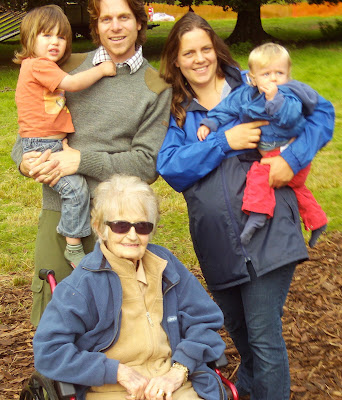 Moy Fair: mum and some of her grand and great grand children - Edward, Kalvin, Emma and Jacob
Mum's late husband Angus Burnett Stuart died in January 2006, He was the inaugural chairman of the Highland Field Sports Fair (the YouTube record from Aug 2007) at Moy. With well selected local colleagues, Angus ran it every August for years before passing that role to our friend James Murray. My mother's been to every fair since it started, but after a fall three weeks ago made getting about with her walker painful, she was wondering if she could go. Nervous about electric scooters she feared her wheelchair might get stuck being pushed at Moy. As it was things worked fine, and as it has nearly every year rain held off and the ground, under many feet, hooves, paws and wheels, stayed firm. We toured the tent avenues of shops, met friends in the Committee Tent and watched events in the main arena, especially the organised chaos of the terrier races in which Oscar picked a fight with another dog ('the other dog started it!') and Lulu, hating the hubbub, which most terriers relish, exited the box and returned at once to me.

I'm eclectic about events enjoying Vaisaki in Handsworth Park, Carnivals in the Forest of Dean, Carnival and Easter lamb-roast in Ano Korakiana, pot-smashing in Corfu town, and of course the Moy Fair.

Dear C. It may be useful for the next Inside Inlogov to know that during Nov/Dec ‘10 I’ll be working for the third year running with Professor John Martin of LaTrobe University, co-tutoring a series of seminars for practitioners – members and officers - in Australian local government on ‘Political Management Leadership: Negotiating the Overlap’ and, while in the antipodes, I’ve been invited to lead a course on 16 November in Wellington for the New Zealand Society of Local Government Managers (SOLGM) on the same theme.
In addition John and I have been invited to lead a day session in Canberra on a new high profile programme being run by The Australia-New Zealand School of Government’s (ANZSOG) ‘Excellence in Local Government’ Leadership Programme on ‘working creatively and effectively with the Mayor or CEO/elected members’. You might be able to use the attached photo which they'll use to show my wise old face on programmes there. Best, Simon
***

*The, to me, unfamiliar sprinkle of extra punctuation - diacritics - not just the single accents (τόνοι) to show the pronounciation of most Modern Greek words in these verses were important to Cavafy who did his own publishing. The Hirst-Sachperoglou collaboration - The Collected Poems - restored Cavafy's punctuation, which until the development of Unicode for Greek Polytonic was almost impossible for users like me to type. There's a Wikipedia article on the polytonic notation of Greek explained in language I can just about follow, and this led me to an intriguing blog on Greek linguistics.
Getting better: