We parked well out of town and strolled in to the city together. Closing the Liston, John, wary of large crowds, withdrew to a vantage point further back, while we pressed and sidled through a forgiving throng, slipped through a volta (lovely word meaning, in Italian, 'arch' or, better, 'arcades' that run in the skirts of graceful buildings) to the edge of a small space surrounded by a few stewarding police trying politely to fend off further advance. “My mother’s over there” I pleaded on mischievous impulse. The officer, noting my white locks, clearly doubted. “Your mother?...(pause - hm)...OK, go go go!” - whisked us over to a prime spot opposite MacDonald's to enjoy Saturday morning's pot-smashing - Corfu's traditional good riddance to the year's sins and woes. On the hour, at eleven-o-clock, to roars of joyous approval, water-filled pots of many sizes rained from many balconies onto the narrow space between the crowds, strewing an archaeologist’s feast of potsherds at our feet. A plant stalk behind an earth filled plastic pot shivering with the velocity of its descent from high off the Liston crashed to the ground near my place in the crowd’s front rank, but after the excitement was over a lady collecting shards found a healthy orchid to add to her souvenirs of the excitement. 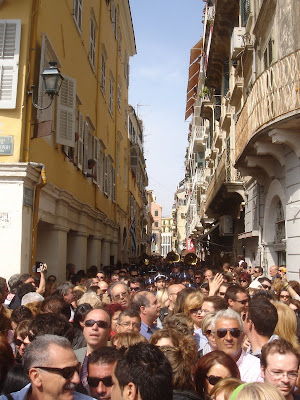 Then followed the ritual of the squeezing of the bands – their swaying tubas alone visible above a sea of happy heads, then bright helmets and feathered plumes and, now and then, a burst of slightly impatient music and clatter of drums seeking room to advance, as each of the three city bands worked their way out of a narrow back street and on to The Liston where, amid admiring claps from the crowd that had been blocking their way, they could reform and continue their march. 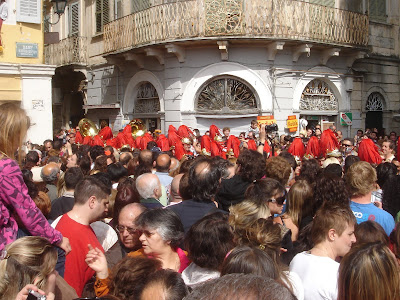 By 1130 Saturday, back in the village, families gathered outside St George’s Church to join a congregation stepping gingerly from inside, tapers lit by the priest from a flame at the altar - hidden from the congregation in the Greek Church. These were joined by more on the short walk to the bandstand so that by ten to midnight a crowd thronged the car park below and the road up to it. Some were using their phones to text and receive greetings from Athens and the Hellenic diaspora. Just before midnight prayers began from the stand, then a rumble from Corfu city to the south - letting their fireworks off early. A few heads turned to see the distant rockets, then our arc lights flickered and shone, as a burst of firecrackers, shotguns, rockets and roman candles drowned the blessing. The band played a merry tune, stepping smartly down the road, a procession of candle holders flowing and eddying after them down Democracy Street... 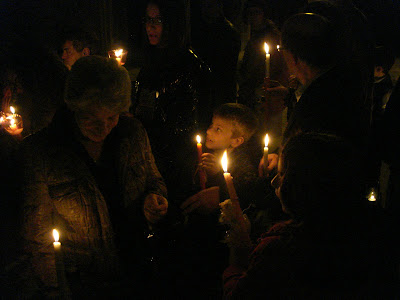 ....babies in arms, their parents, toddlers just walking, boys, girls, youths, parents, grandparents swaying gently along Democracy Street. If a candle blows out you borrow from another’s flame so the myriad lights spreading through the village, as people peel off to their houses, keep their single source from altar to the rough candle flame cross traced on every lintel.
* * *
On Sunday, Dave, my sailing mentor, arranged for us to go to a barbecue ("lamb and chicken, and pork and kokoretsi”) at Jackie’s in Kato Korakiana - no bankers invited. 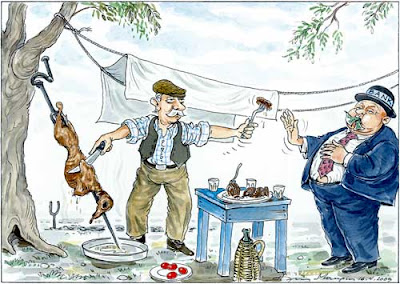 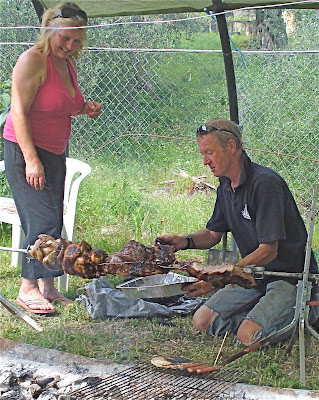 Jackie, our host & Dave, the cook - Easter Sunday 2009 Kato Korakiana
* * *
E-mail from London re Corfu's Old Port petition - suggesting even more have since signed this protest at the proposed height of the planned seawall on the marina currently under construction:


It seems they got to over 600 names and it was being presented last week, but no news as yet! Chronia Polla, and regards PC