We drove along the Culduthel Road to give Sharon a break by having a meal in town. Forgetfulness led to revisiting the worst Chinese restaurant in Scotland. Richard phoned me while we were there. "Dad! I thought we agreed never to go there after that last visit." "Damn" I said under my breath as an uncrispy duck arrived at our table, a re-heated nest of shredded flesh - made worse by our anticipation of the real thing. Other dishes had also come via deep-freeze and microwave - slack spring rolls filled with overheated mush, soggy bamboo shoots...I should have been forewarned. We were the only people there. The waiter was a nice pale Scots lad, not Chinese. The other equally affable waiter was, at least originally, from the Indian sub-continent. "Was everything alright?" "Er...the duck was a bit disappointing and the tea wasn't jasmine tho' your menu said it was." "Och sorry" "Can we have the bill, please?"
"I just couldn't see the point of complaining" I said later in the car as we drove home across Daviot Moor. "Well what could we have said? 'It's totally disgusting.' Which it was. I suppose we should have called for the manager." "Probably not on the premises at that time of night." "Let's go to Cromarty tomorrow." 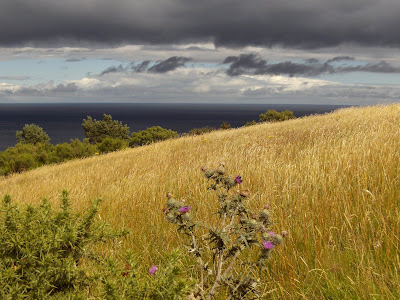 South Soutor at Cromarty
I've visited favourite places - with Kalvin and family, with my mother, on my own but for the terriers. Cromarty, Coignafearn via the Garbol Road, Dog Rose Pool, Alturlie Point, Ardersier, under the Kessock Bridge, the Culbin Woods by Nairn. I've strolled beside the Farnack in semi-spate, so much rain we've had.River Farnack at Farr ~ 13 Aug '10 from Simon Baddely on Vimeo.
My mother asked about the internet yesterday so I sat beside her on her bed and showed her my blog; the way I could jump from text to links, to images - still and moving - and back to text. "That's OK. I keep up with your doings, but I still prefer a letter." "From now on I'm going to go back to writing to you with pen on paper." I reverted to Google search. "Oh you don't have to tell me about that. It's so useful." I took her to Wikipedia; an article on her great grandfather Sir Henry Maine on which I'm trying to resolve an NPOV dispute, reading some of what I'd written:

I also take your point about Sir Mountstuart Grant Duff's ecomium written to draw attention to the theme of the current NPOV dispute, even though he points out that 'Maine warned his countrymen against the insularity that results from ignorance of all law and institutions save one's own; his example has shown the benefit of the contrary habit.' The language may be laudatory but it seems to reflect in Maine an approach that is hardly consistent with the criticism of him by Karl Marx, quoted by Harold Laski, and used to challenge the article's NPOV. Simon Baddeley (talk) 16:40, 13 August 2010 (UTC)

"Ask Amy when she comes on Saturday. It does let you pass around messages and pictures and chat to friends and strangers"
"But surely you can use email for that, or the phone?"
"Well yes but but with all these many tasked modern mobiles..." I sensed I was on weaker ground here, being uncertain myself about Twitter, "...it's about a constant flow of chat. Quick exchanges between lots of people all over the world. Gossip"
"Twittering like sparrows"
"Well yes" "Why do people want to do that?"
"Mu-um!"
"It's just a waste of time"
"Young people love wasting time ... Have a look at these."
I showed some films of me working on our allotment, and my film of Carnival in Ano Korakiana."
"Lovely. Those are fun"
"Would you like to try YouTube?"
"Go on then"
"Tell me a piece of music you like. No. You list eight pieces of music and we'll do your own Desert Island Discs. Here and now."
She thought for a moment.
"Can you play that love song from Tristan and Isolde?"

I called up Waltraud Meier. Record number 1.
"Beautiful. beautiful, but the sound's a bit off"
"Mu-um! It's just the speakers on my laptop. Let's get your earphones for your 'record number two'. What is it?"
"Well I don't like a lot of Puccini. I do like Tosca. Will it play me Angela Gheorghiu singing Vissi d'arte?"
"No problem." Record number 2.
"Record number 3?"
"Something by Renée Fleming?"
"One fine day?"
"Very good...even if it was Puccini"
"Number 4?"
"Can you get Jacqueline du Pré? Elgar's cello concerto with her husband conducting"
"Daniel Barenboim. OK?" I'd seen him the night before doing a masterclass for the BBC Proms. I searched for thirty seconds and found them both in black and white. Record number 4.
"It didn't work out between them. Sublime." 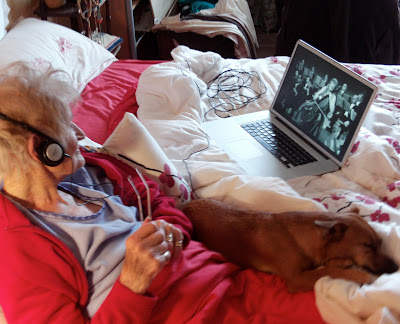 "Number 5?"
"Rachmaninoff Piano Concerto No. 3?"
I found a clip of Olga Kern playing.
"They do dress so well, the Russians."
"Can I suggest Number 6 which I heard on Hannibal? Film about a serial killer who kills rude people. Anthony Hopkins. Vide Cor Meum? It pleases me when someone gets their comeuppance for being bad mannered, like that dolt who honked at the old lady (I showed this later, to mum's delight. Amy told me tho' this was 'set-up' 'a viral')
"Not sure he deserves to be...No. I don't know it. Go on."
"That was lovely"
"Record number 7?"
"Something from Peter Grimes?"
I found Jon Vickers as Grimes singing the mad scene.
"Number 8. Last one."
"Can't remember his name. Tip of my tongue. Strauss. Not the waltz one. Four Last Songs."
"Renée Fleming again. Song number 2"
"She's so good. Marvellous."
"And if you had to choose just one of those records for your desert island, which would you take?"
"Du Pré"
"And apart from Shakespeare and the Bible, what book?"
"The Wind in the Willows. I love the Piper at the Gates of Dawn"
"And you're allowed one object?"
"Rembrandt sketch. An old woman teaching a child to walk." I searched with Google. "That's it!" 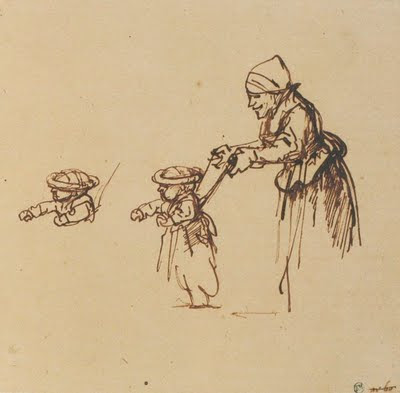 ****** Yesterday we went for a two hour ride through the Culbin Woods. "You once pushed me. Now I push you." Occasionally we gave a lift to old Bibi, my mother's age in dog years. We talked and talked circuiting the well signed Hill 99 trail, stopping at the lookout tower to gaze over the Moray Firth at Cromarty Souters. Ever reverberating, almost leisurely, back and forth across the gentle landscape, Tornadoes exercised. "They could be in Kandahar tomorrow. Cover for the Afghan elections." 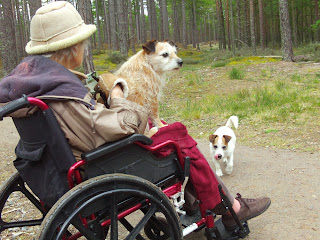 * * * * * I was emailed by an officer from one of the new Cheshire Unitaries - councils no longer Districts sharing functions within a two tier County-District arrnagment - to write an intro' to a report written for the council and other's interested on policy-making methods. My draft:


B*** M****’s language may sound managerial, but this report is very much about the machinery of political-management – emphasising the key conclusion of the 2005 SOLACE Commission on which I sat and which heard, over and over, the point made by the politicians and managers who spoke to us, that “good government is where the best of politics and management combine to be greater than the sum of the parts.”

Newly elected members, and even more experienced councillors faced for the first time with the ‘instruments’ of policy-making, as described here, can feel like passengers who, in safer times, could request a visit to the cockpit of the airplane in which they were flying. A complex array of dials, switches, levers, flashing lights impressed the visitors, who remained undaunted for knowing there wasn’t the slightest chance that they would ever - except in a movie thriller – have to take over the mystifying responsibilities of their genial pilots. But when it comes to understanding and steering the policy-making process they really will, and in many cases already have. This is no fantasy, though it may feel as exciting, daunting and even frightening.

The idea that members are mere customers who make policy by passing on their wishes to skilled but deferential officers has long been discredited in excellent councils. Equally discredited by these authorities is the idea that officers run the council. Both officers and members know this can never be as satisfactory as forging policy together, while at the same time knowing that members must stand back from the operational work of managers, and officers must resist being drawn into politics. Both know they must negotiate and sustain an intimate overlapping of responsibility for their local populations - who rather than being customers are citizens to be drawn into that shared activity we have come to call ‘governance’

A chief executive suggested the relationship between politicians and officers in government is like a tango: “Who’s leading and who’s led is only clear in the most formal sense; to get it right you have first of all to learn the dance”. More and more members and officers, with the help of people like B*** M****, are learning to do just that.

More and more elected members are learning the value - indeed the necessity in these difficult times - of policy-making skills, of drilling deep into the intricacies of finance to learn how money works to serve their policies, and more and more officers are matching the increasing skills of members with a keen understanding, appreciation of and sensitivity to the world of elected members, how it feels for them in their wards, on the street and in the ballot box.

Local democracy doesn’t just happen because there’s a locally elected authority. It has a chance of happening – despite the constraints placed on UK local government by the most centralising system of government in Europe – if a local council contains men and women, members and officers, deeply committed to inventing and reinventing, honing and rehoning, the machinery of government – machinery so ably and usefully described in this report.


Simon Baddeley, Inlogov, University of Birmingham, an academic who's made a career of learning from practitioners about the subtle dynamics involved in constructing trust at the point where politics encounters management in the making of government.

** ** ** Getting started on another Ismail Kadare - The General of the Dead Army.
Posted by sibadd