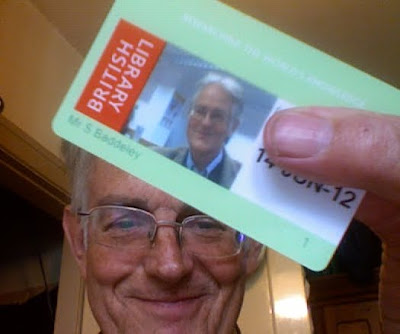 In 30 days instead of the feared 90 days my free digitised copy of Eleni Calligas' 1994 thesis The Rizospastai (Radical-Unionists): Politics and nationalism in the British Protectorate of the lonian Islands, 1815-1864 has been successfully downloaded to my laptop. There have been delays about which I've grumbled but that's because the EThOS digitised thesis service has been more popular than expected.
What a wealth of evidence and analysis I can now take to the island to read at leisure - Calligas' scholarly account of an epic struggle between politics and nationalism, of an escape from the Protectorate that, in the passionate words of the leading rizospastai, Ilias Zervos of Cephalonia, had:

...substituted rather than fulfilled popular rights and, in the guise of revolution (bred those who) want only the removal of their opponents from power and the substitution in their place of either the instigators or others chosen by their obscure promoters...

... 'instead of freedom', the mother country had given the Septinsular the pollutant of political corruption...

which has brought this miserable nation to its present deterioration and produced as many unscrupulous exploiters as a decaying corpse produces worms.

Calligas concludes 'The immense bitterness of this diagnosis stemmed from the conviction that lonian radicalism had contained in its doctrines and practices a life-giving alternative.'
* * * 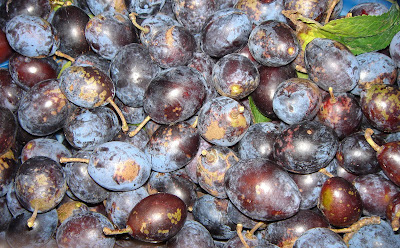 I picked a bag of damsons from the garden for Lin to take to her mother to make jam this morning. An email came from Mark:

Hi Simon , just looking to see when you arrive and I believe it is on Tuesday the 25th .... Martin and Angie and young Theo are here (their last night) so it would be nice for us all to get together if you land early and not late that is, anyway let us know. Mark

We go to Greece with uncertaintly about the future of inlogov, (my dream) my link with the university, the opening of plots on the VJA, the economy...Time for:

"You are old, father William," the young man said, "And your hair has become very white; And yet you incessantly stand on your head Do you think, at your age, it is right?"

Meanwhile my 'order book' contains a number of seminars on scrutiny including one for States of Jersey, a joint Oversight and Scrutiny two days with Andrew in London the moment I get back from Greece, the Japan Programme over October, the Australian tour with John Martin in November and a likely post graduate module early next year, with various other enquiries for work and an ESRC Small Grants bid with Jonathan Davies.
* * *
Well well...how nice... I've just learned in a chat on Liana's Corfu blog that the family, headed by Vasilis, who run the olive oil processing factory at the foot of the village also make iron gates and balconies. We've grown increasingly keen to find a way (including the cash) to replace the outside stairs to a balcony that the previous owners' builder so fecklessly removed from 208 Democracy Street as part of the ill-judged improvements we've gradually been making good.

Young Mrs T, over a Greek coffee in their sitting room, mentioned the vexed loss of our side balcony (μπαλκόνι). I asked her the word for ‘stupidity’ – ‘vlahas’ “βλάκας” – and repeated the word with appropriate gestures. “I promise it will be restored” I said, rubbing my finger and thumb with the need-for-money gesture. (I’m determined we should do this). We exchanged animated gestures of astonishment at human folly, muttering “βλάκας” again. “Why take it away?” “Akrivos. Yiati?” I replied (“Ακριβώς. Υιατί;”) “βλάκας” we agreed. “Balcony!” she gestured gently “You say ‘Calimera’ to the street!” Talking about this to Lin, explaining to Annie, how the English builder for the previous English owners had built on the large wooden balcony overlooking a panorama we love, but, in the process, removed the stairs on the side of the house leading to first floor french windows and a smaller balcony that overlooked Democracy Street, the neighbours and the path below - substituting private space for what had been public; especially as, until Lin replanned the upstairs room, the new wooden balcony could only be entered from a bedroom. “We must get a plan and an estimate” I said “I’ll ask around – possibly Thanassis S or Kostas A – might know of a photo from Ano Korakiana archives. There are quite a few old photos on the village website…but this all happened so recently. Hm. I’ll see if Mr Leftheris can do a sketch from memory.” (22 April 2009) 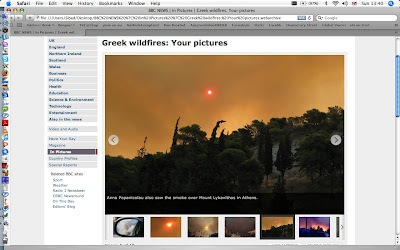 When the wind blows: smoke from fires in northern Athens seen over Lycabettus in the city centre
** ** ** Historical research helps create a more complicated idea of Greece. Two newish books about seeing and inventing Greece David Wills' The Mirror of Antiquity: 20th Century British Travellers in Greece and The Making of Modern Greece: Nationalism, Romanticism, and the Uses of the Past (1797–1896) edited by Roderick Beaton, meanwhile I'm enjoying a detective story - The Messenger of Athens by Anne Zouroudi whose hero Hermes Diaktoros, has a moniker - 'the fatman'. He buys a box of matches, empties out the matches and replaces them with a cockroach. I've at last found a Greek detective to add to my set of fictional policemen from different countries, Salvo Montalbano, Aurelio Zen, Franco Brunetti, Kurt Wallander, Bernie Gunther, Shunsuke Honma, Jules Maigret, Irene Huss...
* * *
Regarding the Victoria Jubilee Allotments, Adrian Goldberg at The Stirrer has featured the latest situation. My friend, John Tyrrell, after hearing the news of the indefinite postponement of the S106A on the the VJA passed this to the City Council Cabinet member for Leisure Sport and Culture, Councillor Martin Mullaney, whose portfolio includes allotments. John tells me that Martin's meeting with officers in the morning "to get to the bottom of this." I've sent a briefing email:

I make regular use of your 'graffiti' youtube to show what can be achieved, but that's not why I'm writing.

On the subject of the Victoria Jubilee Allotments (VJA) and the postponed S106A conditions which John Tyrrell has drawn to your attention, I'm sure your officers will inform you of this, but it may be helpful to read this from the minutes of a Lozells and East Handsworth Ward meeting on 28 July 2004 – a month after the application - N/01514/03/FUL - to build on the VJA subject to the S106A was approved. I was the ‘member of the public’ who asked for assurances of this matter being monitored.

Extract from Minutes of July 2004:

A member of the public drew the Committee’s attention to the fact that the planning application for the Victoria Jubilee Allotments had been deferred so that a Section 106 agreement could be signed to provide the following:-

• Eighty new municipal allotments plus an index linked payment of £21,000 towards their maintenance.

• An index link sum of £15,000 towards the regeneration of neighbouring Handsworth Park.

• Two playing pitches and a cricket square plus a pavilion and car parking to the Council design.

The member of the public requested the Committee’s support and commitment to ensuring those conditions were honoured and that the Ward would closely monitor progress on those negotiations. The Chairperson indicated that the local Councillors had been supportive of the proposals and the relevant Planning Officer would be able to advise on the current situation. (Extract ends)

Over the years we've not been well informed. New conditions kept emerging as excuses for delay such as the notorious 'trigger' point decreeing no work could proceed on the S106A until a certain proportion of houses had been been sold. I'm not suggesting that's not normal but why was the ward committee and the public not informed? It had been extraordinarily difficult for us, but also our solicitor, Phil Shiner of Public Interest Lawyers, to extract information we were legally entitled to receive from the City Planning Department, consistent with the verbal assurances we had been given about being kept informed of progress. As a result we have been subject to a continued series of raised hopes followed by news of further delays of which the latest is the most depressing - given the prolonged campaign that we conducted for nearly 10 year's prior to the application's approval to save the whole site from being built over - a campaign that took us right up to our barrister's assessment of the prospect of judicial review of a planning decision defined as unsatisfactory but in the last resort legally unassailable. It was a close run thing - with the approval won by one vote in committee in May 2004.

What must be renewed
Posted by sibadd