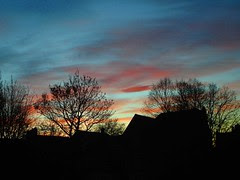 Richard, my son, took this picture of the view from the back of our home in Handsworth, Birmingham. Ours is a detached cautiously Tudorbethan house built in 1935. It has a bell box in the kitchen with little signal numbers for Bedrooms 1 and 2, Front Rm, Dining Rm and Lounge, so that a servant could be summoned from each place. Today this system, if it worked, should allow whoever is in the enlarged kitchen (it was originally a rather mean scullery and small morning room) to call people in the rest of the house, though now it's more likely I will use a mobile phone to call the attic. The darkened houses across the garden are of larger Victorian houses converted to flats by social landlords. Many are semi-occupied, providing transient homes for people who haven't quite made up their minds where they are, in contrast to the more decided residents of Beaudesert Road.
* * * There are various arrivals, passages or departures that bring emotions to my fairly stiff upper lip: As the train heads south from the Highlands it speeds down a long gradient through Drumochter Pass between the Sow of Atholl and the Boar of Badenoch. This is part of a journey I’ve been making regularly since Christmas 1950. Until the 1960s a second steam engines was put on the sleeper at Perth to make the gradient when going north – these two mountains – small by Greek standards – have marked leaving or arriving in Scotland, even though Dalwhinnie Station, at the head of the pass is over a 150 miles north of the border. I've been making the journey - on and off - all my life. As a small child with my sister in the care of the guard, as an uncomprehending adult-youth looking for an unknown career, as a happy father of small children and then, in a new millenium, of my teenage children and their friends and the beloved dog Oscar Arriving by train after being absent for a while, through the scruffy remains of Victorian Birmingham - our city – to arrive at the ugly busy station beneath a low concrete roof below the city centre. 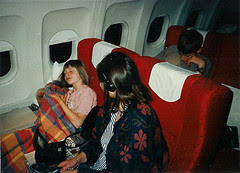 Discerning the Ionian coast from the deck of a ship through a morning haze. I recall, also, flying into Athens after not seeing Greece for 25 years and being able - as one still could before 11 September 2001 - to go with Richard and Amy to the cockpit of the Airbus (the one that doesn’t have a steering lever and is flown by buttons) and seeing the mainland laid out in dark marked by the glow of Thessaloniki to the east, the moonlight on the Ionian to our west, tiny jewel-like clusters of villages thousands of feet below and far ahead the loom of Athens (Photo: Amy, Lin and Richard on their first visit to Greece in June 1996) It’s a swift transition from heart warming feelings to the noisy modern reality of an airport or port – an antidote to involuntary uncritical sentiments, in the form of a cut to another land with which I feel familiar, despite my ignorance. 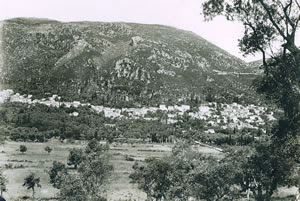