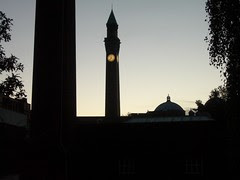 Somewhere there's always been a bell
Sibad.
Taken by one of my Japanese students at 7.00pm on an October evening in 2004, 'Big Joe', officially the Chamberlain Clock Tower, marks the centre of the first 'red brick' university in England. It's in University Square 200 yards from the the School of Public Policy where I've worked since 1973. After seeing the Torre del Mangia in Siena Joseph Chamberlain asked for a Birmingham version that could be seen across the city to which he'd devoted his political life.
Posted by sibadd