There’s a walk that goes westward from our house in the centre of Ano Korakiana Άνω Κορακιάνα – an area called Αρκούδενα - the Bear, (no-one's told us the origin of the name), 250 metres along Democracy Street, to a Y-junction. Here’s a corner provision store, burned down and restored over two years ago; a place to gather, offering space for vehicles to edge by one another, or park. You can continue left, round a blind corner, and wind downhill 2 kilometres to the Sidari Road, or take the right turn that heads steeply into Μουργάδες, Mourgades - a word that translates as ‘the dregs’.

There were many olive presses here. One remains inside a finely proportioned house at the end of the neighbourhood; a corner angled to allow the passing road. A busy foreigner's supposed to have spent much money restoring the building, including the old press inside an airy atrium. Local agents - not Greek - took up his dream with confident promises of professional help with the project, telling him they'd obtain permissions for all alterations. This they did not do, leaving changes made by builders at the mercy of local planning inspections. Work was delayed, then stopped for failing to conform to the local vernacular. With plausible assurances the absent owner's helpers withdrew, leaving the property more incomplete than when it was merely neglected.

After the heavy rolling stones of the olive press had cold-crushed the oil from the olives, as with wine from grapes or cider from apples, the miller was left with the olives' skin and bones ... ‘postain’ ‘potage’ (what’s the word?). Pomace! From pomace came the distinctive aroma that once permeated the maze of paths in Mourgades.

Perhaps the area should be called Ελαιολάδες or Eλαιοπυρήνα. I think of Mourgades, with its many recently improved houses, as the posh end of the village. It even has traffic lights, to avoid a jam between cars that venture through from either end. A notice cautions that the road narrows to 1.8 metres. Here, up an alley, even narrower, are two derelict houses, beside them turfed-out broken furniture, blackened kitchenware, a chamber pot, a retired cooker, rotting carpets, a German army diesel canister brimming with clear rain water, stamped with the date of my birth – 1942. 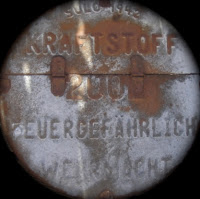 On the other side of Mourgades the road heads west past a few outskirt homes, an allotment and chicken run, through olive groves and boulders that, long ago, must have tumbled from the crags above the village, now muffled and decorated by saplings, shrubs, moss and grass, rooted in their crevices. The road, like its two siblings, runs two kilometres to the same main road between Corfu and Sidari in the north. It’s recently been repaired to 'passable' – the rain washed grooves on one steep corner filled in and rolled smooth. All along here our eyes have the sudden delight of sunlight piercing the foliage, dividing into myriad beams, brightening small flying insects like dust motes, dappling the ground between the olive trees – back-lit into the distance. 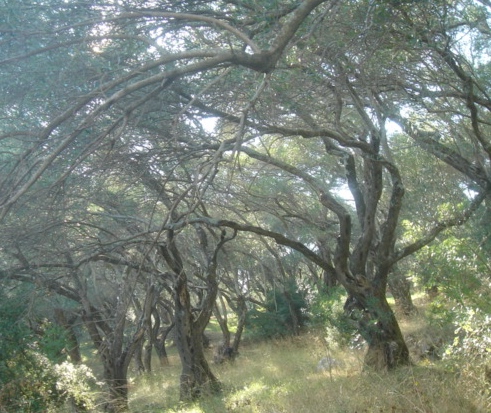 A children’s book wood, or, closer to dusk, a dazzling exposure over the tree tops. Momentarily blinding. 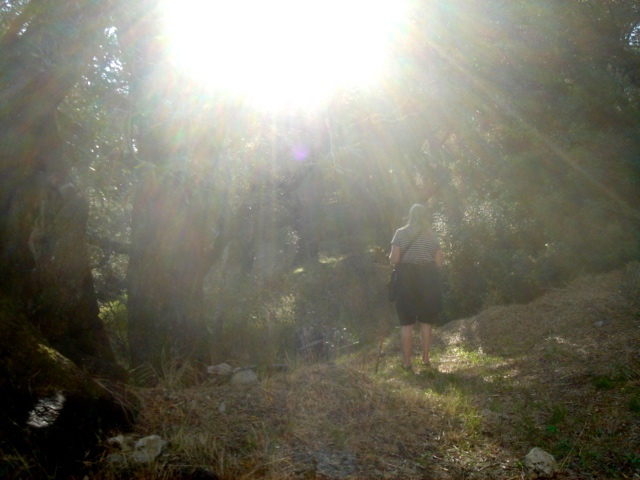 A long-lost friend of Lin's once remarked, when walking here at dusk.
"I'm out of my comfort zone"
The road winds down and down 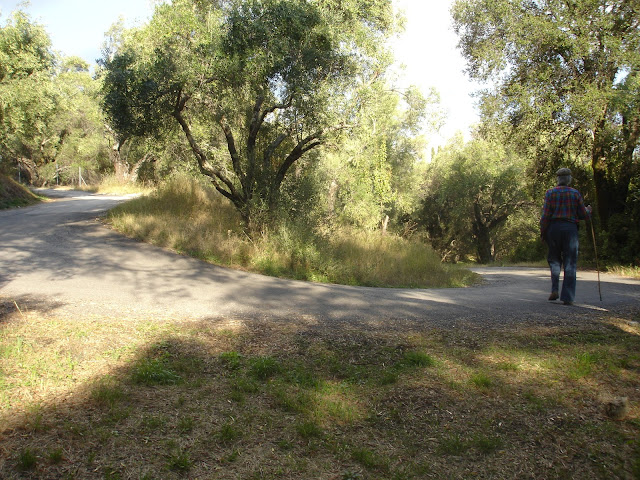 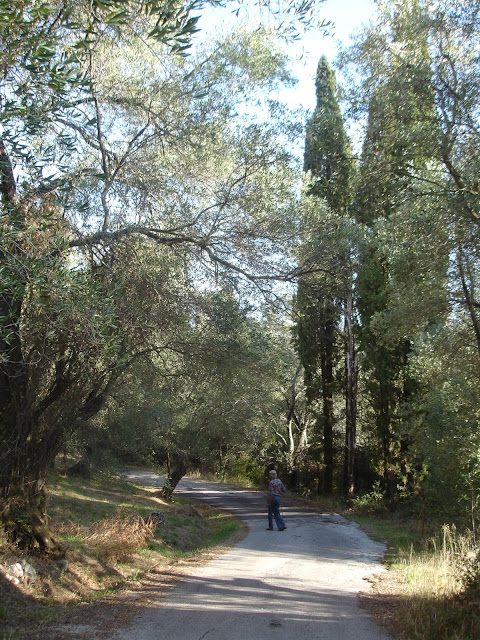 On the level ground there are pastures, vineyards with rusty fences set in low concrete walls. A winter brook winds across our route - a ditch, still dry in this long stretch of sunny October weather. Clear of the woods, we see the mountains above Ano Korakiana, and, in the distance, a few roofs and walls, the village tucked into the hillside a mile away. We’ve walked this circuit often.
“There’s the gateway where we stopped for a snack when Amy and the children and Liz were here” That was three years ago.
A few more bends on an even road, then up a rise to meet the main road. Trucks and coaches rush by. We walk just a few yards along its verge to the quiet road that leads back to Democracy Street.