Reducing the ravages of old age?

I'm one of the thousand elders; one of those upon whom medical experiments are performed. Though 5 years past my ‘sell by’ date, at 75, I am perfectly healthy. I think. The various researchers – contacting me (via my blood donating) for the UK Biobank and the 1000 Elders project, associated with Birmingham Queen Elizabeth Hospital, want that in subjects of their research into healthy ageing - specifying a need for 'healthy non-smokers in their 60s, 70s and 80s showing in the healthy range of Body Mass Index'.
Earlier this year I was part of a continuing study by Simon Franklin from the School of Sports, Exercise and Rehabilitation Sciences, exploring whether extended use of minimalist shoes can increase intrinsic foot muscle strength. I'd not even heard of minimalist shoes! I was in a control group, wearing ordinary shoes, with a pedometer on my belt, for two periods separated by 4 months, measured before and after for balance, weight, height, foot muscle strength and style of walking – using an elaborate cricket-wicket length walk, with sensors attached to reproduce an image of me walking in the manner of the movement analyses of the genius Eadweard Muybridge, but of course all appearing instantly with me as a 'stickman' on Simon’s flat screen. He’s sending me his paper on this research later in the year.
A more arduous participation for me has entailed 5 visits, as the subject of a double blind test of a vitamin supplement, much touted on the web, that reduces the ‘ravages of old age’ by doing something to enhance the 'battery-life' of my ageing cells


Companies selling NR claim that it reduces the effects of ageing. In the UK it's on sale with fairly modest claims, but in the USA its retailers make bolder claims, for instance, of an over-the-counter product called Niagen, one retailer says:


N(r) NIAGEN is the ONLY PROVEN Natural supplement for boosting NAD+ Levels in the Human Body. This leads to boosting the metabolism, enhancing mental focus, improving memory, and increasing muscle endurance. N(r) NIAGEN is the greatest breakthrough in natural supplementation since Creatine. In an industry ripe with BS, N(r) NIAGEN is an absolute blue chip, a product built on real science and university clinical data. N(r) NIAGEN only contains one ingredient, NIAGEN. This ingredient, scientifically known as Nicotinamide Riboside, is structurally a member of the B-Vitamin family. NIAGEN has a host of benefits including brain health, muscle endurance, and metabolism; but they all come back to one simple fact; NIAGEN increases the level of NAD+ coenzyme in our cells.

I'd really like to see this tested - on me and others - by reliable research. Through June and August to 1st September 1 this year, with 11 fellow subjects, I’ve been used to explore such propositions, making five visits to the NIHR/Wellcome Trust Clinical Research Facility, Queen Elizabeth Hospital in Edgbaston, cycling there from Handsworth, about 5 miles, mainly along canal towpaths, but on a couple of occasions taking bus and one of the frequent trains to University station.
On my first visit to Dr Yasir Elhassan he sat with me to explain his research. I signed the usual consent papers. After that there were four more visits to carry out a double blind test of the effects on me of NR; neither I, nor Dr Elhassan, knowing whether I’m taking a placebo or the dietary supplement. For three weeks I took a daily dose of what might have been NR or might have been a placebo. There was a break of three weeks, after which I spent another three weeks taking further daily doses of NR or placebo. I remain unsure during which testing period I was on one or the other. Yasir had told me the effects would probably not be obvious. This is why the research, and indeed I too, paid relatively little attention to subjective impressions, though I'll get a questionnaire some time soon asking me about those.
The testing involved, on each of four visits, a variety of procedures; weighing and measuring me, and taking a 24 hour urine sample, and then, as I lay for five hours on a bed... 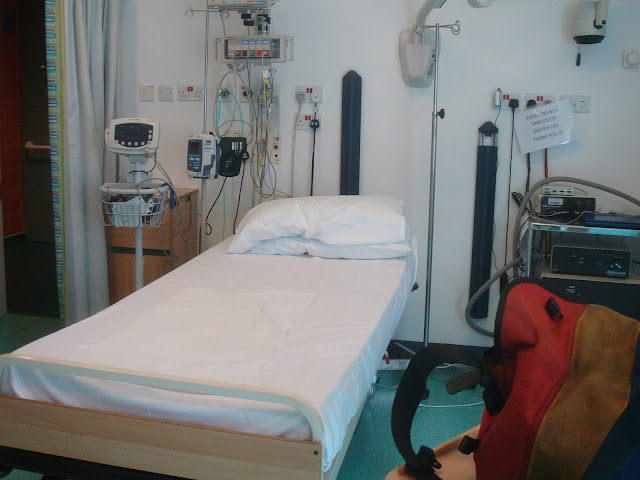 ...in a dedicated experiment room, full of specialist equipment, taking samples of tissue, 'aspiration via a fine-needle biopsy' from my upper thigh...
– and regular samples of arterial and venous blood from wrist and forearm - 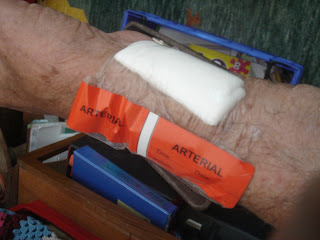 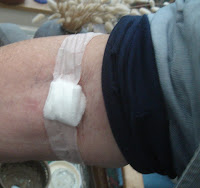 ...doing a grip test, testing my oxygen consumption and CO2 production via a sort of space helmet, placed at 20 minutes intervals, over my head, a procedure called -  indirect calorimetry; and taking an oral glucose tolerance test.
The procedures were painless, preceded in the case of the arterial blood extraction and biopsy, by local anaesthetics. Yasir jokes that these procedures are ‘torture’. He's an interesting man; utterly professional, very precise, and yet human; kind in his ministrations, and unpatronising, though he must be well aware of how low is my understanding of what goes on inside my body. If I were ill he'd be the doctor I'd like at my bedside. The same goes for the nurses who helped with his research - especially Nasreen, whose second name I didn't catch.
This is certainly the most intrusive research in which I’ve been involved, yet a million miles from 'torture', or even the surgery that might be needed for a real problem; far less uncomfortable than having Lin, concerned with my aesthetics, tweak small hairs from my nose - septum in particular - with tweezers. That makes me yell!
I'll await the results of this research with interest - not least because I have no interest in averting the so-called 'ravages of age' - unless they start to take my mind. The cost of this dietary thingy, NAD, is high. In my mid-70s my duty isn't to try to pay to live for ever, but to seek to live as well as I can until I go back where I came from and become part of everything again; not to offset mortality but to prepare, as well as courage allows, for death - whose presence  flavours every moment of my happiness.