'...co-operation between the gardener and the cook...'

The top of Soho Hill, three miles north west of Birmingham city centre, is concealed by the terraced streets that run north-south across Handsworth to Soho Road, where the gentle topography of the old rural landscape is blurred, depicted in old pictures, difficult to match with present observation.

I didn’t notice the hill’s slow ascent from the Hockley flyover, two miles to Junction 2 M5 and Smethwick, until, 15 years ago, I took to cycling, sensing the artery’s steady north-westward incline in my pedaling. In places, green spaces remain, once pastures, or heathland, the area’s boulder clay unsuitable for cultivating crops.
Where buildings and streets stop, there lie, near us, precious green spaces, landscaped to oblige the town – St Mary’s Churchyard where the dead lie in their classes from family vaults to paupers' unmarked indentations, Handsworth Park, whose history I’ve written, and the Victoria Jubilee Allotments on the north side of Soho Hill, on a gentle slope that continues, beyond sturdy iron palings, to the Handsworth Park pond and St Mary’s Church, whose bells, hushed by trees, ring familiar changes.
In June 2010, when the new Victoria Jubilee allotments were at last opened, Lin and I chose a plot at the far end of a site for which I and others had campaigned over ten years helping the city to negotiate a S106 agreement that delivered eighty municipal allotments, gravel paths, drains and a portakabin club house. The allotment is 200 square metres. Plot 14. A new part of my life.
“I shall not join the site committee. I’ve done enough paper work and talking to win conditional rights to this ground. £30 annual rent for over 60s. I shall concentrate on cultivating my allotment!”
I began to break up the surface tufts of well rooted couch grass the day I signed the lease. So I started to learn just what we'd squeezed from a developer who’d planned to build over the whole site, but been allowed a third of what had once been private allotments.
The ground the developer left, after all the grading and digging they’d done to build houses, was not what it had been. The precious old tilth, product of a century's gardening, had disappeared, skimmed and dispersed all over the site, the ground graded and compressed over several years of construction by heavy machinery. The area’s unforgiving boulder clay, pushed into the Midlands by ancient glaciers, never arable, had resurfaced. The developer, pressured by the city, and Handsworth Allotments Information Group (HAIG), had hastily strewn a miserly carpet of second rate topsoil, before handing over the site under the terms of their 2004 S106 Agreement with the Council.

In the first phase, Lin and I got a shed via freecycle. We levelled the plot’s slope, edging a square with tanalised timber on which, under a bed of sand and pummelled earth, we laid levelled slabs recovered from a Handsworth front-garden. I re-roofed the shed, adding a veranda.

For the next three years of phase one, I learned about soil. There came a stage where I was close to giving up, not looking forward to the short journey - walking (12 minutes), cycling or driving - to our plot. The spur was a formal letter.

I also learned that, but for the darkest months, you cannot leave an allotment alone; that couch grass can only be reduced by persevering work that never ceases; that more or less all that's edible is food for slugs and snails, with different vegetables prone to the attention of specialist insects – onion fly, potato worms, carrot fly - as well as being prone to infestation by disease, and ailments arising from missing elements in the soil. Then there are the birds, pigeons especially, who focus on fruit. That another pest is people, who break into allotments to steal; that my plot needed investment in manure... 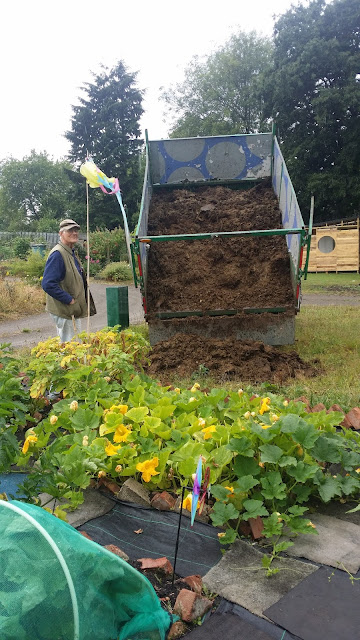 ...topsoil and compost, delivered by tipping trucks and in builder's bags...

...that I could make my own compost, use mulch and weed suppressant fabric and netting; that I could grow from seed in a green house – bought second hand... 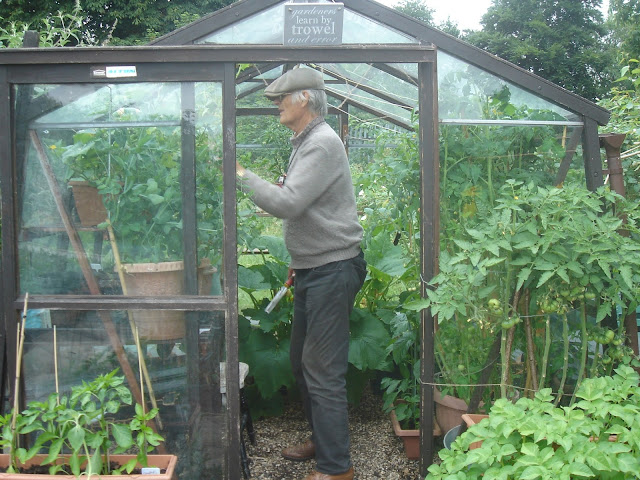 ...and, with a fruit cage, grow strawberries and raspberries and more, and working with our neighbour Gill, an apiarist, and with site committee permission, have Buckfast bees on site, giving honey and pollination; that cultivable soil should be laid out in beds that can be reached from a network of paths to ensure not having to walk on them; that earth is rich, sensitive, structured - an environment for billions of micro-organisms; that when growing things you should be more inclined to feed the soil than the plants that you grow in it.
The second phase – from the start of 2015 - has to do with rejoicing. It would have been impossible without my discovery of, and friendship with Winnie Hall,  who’s growing skill and confidence have made Plot 14 work. ‘Our’ plot now yields crops – potatoes, tomatoes, peppers, runner beans, broad beans, onions, garlic, marrow, butternut squash, pumpkin, courgette, aubergine, peas, cucumber, apples, cherries, plums, strawberries, raspberries, pears, gooseberries, tayberries, artichoke, Jerusalem artichoke, parsnip, rhubarb, grapes, rosemary, chives.

Some things planted have not thrived; cabbage, cauliflower and Brussels sprouts have more or less failed. But my feeling is of triumph made sweeter by seeing so many others who’ve fallen by the wayside as they’ve grasped the work, time and cost involved in growing food on the Victoria Jubilee’s testing ground. Almost shameless triumph is made joy by the visits of my grandson Oliver and now his sister Hannah, learning like me, ...
...starting to grow things in the sunrise of their lives. 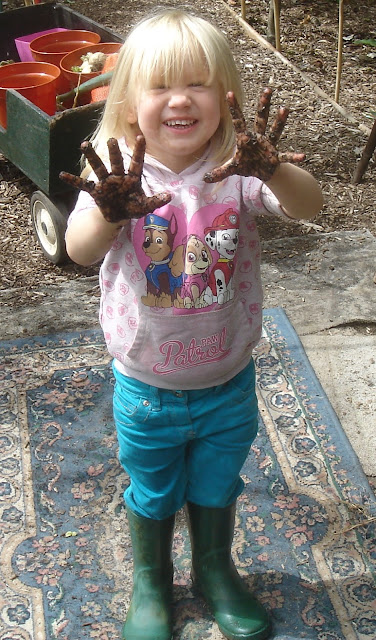 I’ve commissioned a painting from Jan Bowman to capture this delight – a portrait of Hannah, Oliver, Lin and I on the plot in July, celebrating our grand-daughter’s third birthday.

The third and present phase has to do with illusions; with something I’d not anticipated when focused on preparing the ground and getting it to yield harvests – a problem of bounty becoming glut.
Over a year ago I was talking to a friend, who has an allotment in London, about growing vegetables. Supper in a restaurant near Russell Square.
“…human beings’ relationship with the earth. How it’s broken. Severed over generations by the transition from rural to urban…estrangement from the land. Loss of craft in cultivation…How can I, whose ancestors abandoned the land with Industrial Revolution, getting rich as iron-masters, mill-owners, bourgeois progeny, urban aspirants earning wealth from the surpluses of mechanisation…Leas of Oldham whose business profited from the sweat of mill girls. Jacksons of Rochdale, a mansion home burned down by mill workers?”
I spoke of first generation immigrants, from lands where farming is still in the blood – as in Greece, in the Caribbean, Gujarat, Africa.
“How can I hope to acquire that feel for growing stuff?”
I glimpse a glaze, my friend, with all her grace, cannot quite withhold.
I struggle on “My paternal great grandmother, born in Oldham, married in London, left the city to live in a cottage by the Itchen. She cultivated, with help from Mr New, her gardener. My sister and I had the run of surrounding water meadows. My maternal grandmother abandoned a metropolitan social life to start the dairy farm where I was born…my stepfather, born in London, made a career in broadcasting…in his last thirty years making a successful TV programme called ‘Out of Town’ about disappearing country life, the fall-out from mechanized agriculture. He once called my grandmother’s adventure a ‘hobby farm’ … she was devastated…anyway…what I’m saying is, on my allotment, I’m getting back some of that long lost…”
My friend - at last – intervened; agreed that the relationship between humans and the land was "perhaps broken"
“Yes, yes” I said “accelerating distortions in relations between the city and the countryside…”
“But, Simon, what also matters, perhaps even more is the relationship between the grower and the cook.” 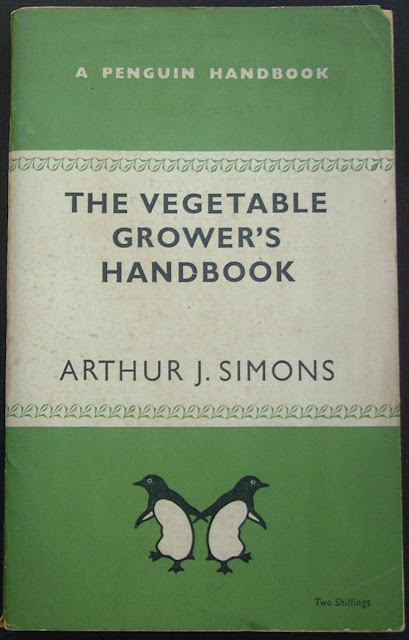 By email she referred me to a paragraph in The Vegetable Grower's Handbook (1948) by Arthur J. Simons:


Time and again I have seen kitchen gardens and allotments which have been assiduously sown and planted by the head of the family without any regard of the actual requirements of the kitchen...The golden rule is to grow what you most like to eat in sufficient quantities to ensure that you have enough of it but not on such a scale as to involve wastage. This demands close co-operation between the gardener and the cook or housewife.

Leaving aside the author's archaism about 'head of the family', I hadn’t thought of this. I had just assumed that cooking and eating would follow the successful harvesting of which I was so proud.


So... now I..we have to learn  and far more important, agree, about succession planting, about storing, about deep freezing, about preservation, about bottling, making jam, jelly, chutney, about dehydrating, - every craft and trick from the ancient books about how to even out harvests; cooking and eating what's grown at home. There's the satisfying option too, of giving stuff to neighbours, and on occasion bringing a basket of surplus from the plot to offer for collection, when we do street work with Handsworth Helping Hands.