Black Patch Park at the end of summer 2017


In the last 18 months things have changed for the Black Patch – not only for the park but for its surrounding streets and small edging areas of land. In mid-2016 the Leader of Sandwell Council said that previous bets – few and far between - on the future of the Black Patch were off. Something serious needed doing for this area at the eastern end of the borough - neglected 30 years; blighted by the dispersal of all but a few of its surrounding residents; by a pragmatic council decision to decommission the park and rezone it for light industry, and by its spreading repute as an expedient place for flytipping. Councillor Darren Cooper declared to us, in his office on 16th March 2016, that things were going to change.
His sudden death, within days of our meeting, did not interrupt that aspiration. Rather, a decision to restore Black Patch Park became part of Darren Cooper’s eulogy, repeated, with detail, at a meeting, on 23rd February 2017, with Sandwell’s new leader, Cllr Steve Eling. “The whole area” he declared from his predecessor’s chair “has been blighted by decades of piecemeal decisions”. Council strategies, having nothing to do with this area of the borough, have nudged the ‘Patch’ into an urban limbo – reminiscent of its status 150 years earlier, when none but the Romany would make a home on 10 feet of industrial embers threaded by two oily brooks beside barren rail embankments. 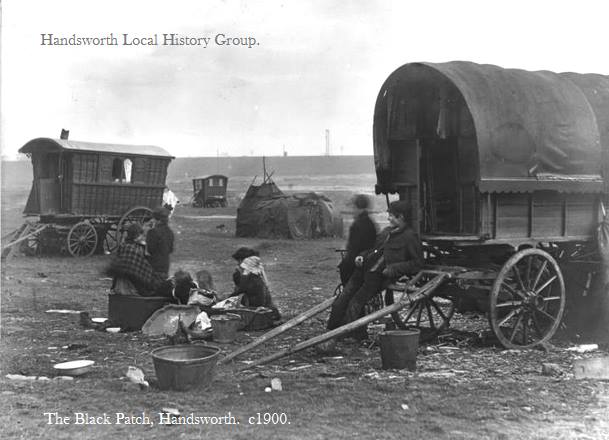 Cllr Eling spoke of the need to solve the 'Black Patch conundrum’, acknowledging an analysis written and illustrated by the FoBPP, in which we’d made a detailed case for bringing housing and people back to live beside the park. There had, he said, to be, not just disjointed decisions about the park, but, a ‘strategy for the whole area’. He observed, of our report, that its call to rezone the park’s edges for housing, returning people to the area, had at last defined a ‘sustainable community for the Black Patch - one that breaks out of its enclosing rail and metro embankment to spread new residents along, not only Boulton Road, Perrott Street, Kitchener Street, Foundry Lane, Wellington Road, but also along a wedge of land overlooking the Merry Hill allotments, marching 200 yards by walkway, to the Birmingham boundary and Winson Green Outer Circle Metro Stop, reuniting the park with other users along Nineveh, Tew Park and Reynolds Roads, terraces east of Handsworth New Road and more Birmingham residents living on Queens Head Road. 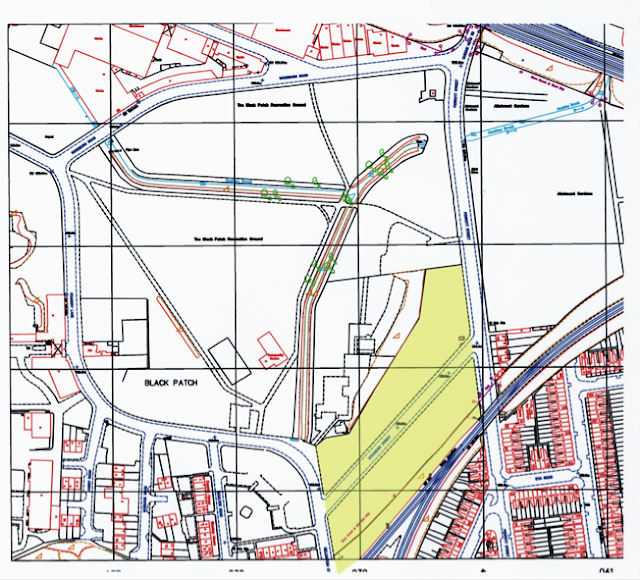 Following that first meeting with Steve Eling, we and many others, witnessed a crescendo of dumping and ground trashing on Black Patch Park; so unscrupulous in scale and variety it reached the national press; a possessive trespass on public space so contrary, that one of several men dismantling a caravan in the centre of the Black Patch asked one of our members, strolling across the park, what he was doing there when ‘they were working’.  Adverse publicity prompted a response from Sandwell typical of the ‘piece-meal’ decisions Steve Eling had blamed for blighting the area. Determined to stop the ‘invasion’ by ‘urban vandals’ of its green spaces, Sandwell MBC, under direction from Cllr Richard Marshall, Cabinet Member for Leisure, allocated £200K to layout a temporary transit site for travellers next to Black Patch Park, a move which, under national legislation, gave a local council powers to enlist police support to evict trespassers from borough parks inside 24 hours. The residents of Avery and Murdock Roads, the only homes in sight of the park suffered the most desultory of consultation before two acres of land between Wellington and Boulton Roads were cleared, hard surfaced and fenced, driving a stake through the sustainable housing area promised a few months earlier by Steve Eling. The latter wrote a long letter to the FoBPP emphasizing that any new policy to bring housing to the area would take time and that the site was there, unless its temporary status was changed, for just three years - the only means in his and his colleagues’ judgment of ensuring a genuine future for the area, preventing further trashing of the park, and reducing an ever-increasing clean-up budget.
The Friends, through these months, while balancing concern over the trashing of the park by travellers, were always mindful that the park was created in the 1900s through the violent eviction by council bailiffs of the only people willing to stay there - the Black Patch Gypsies. A positive to come out of Sandwell’s temporary transit site off Boulton Road, was that the park’s few remaining residents along Avery and Murdock Roads, led by the formidable Jules Manneh, joined up with the Friends. Juls, by common approval, was voted our Vice-Chair at FoBPP’s AGM on 15th August. At almost the same time we gained the support of Ash Barker, who by joining the Friends brings the resources of the Newbigin House ministry in Winson Green and the Newbigin School for Urban Leadership, to the campaign for Black Patch.
The temporary transit site, with the curfew placed on the Cassidy family, has, for the time being, sent travellers to green spaces in adjoining boroughs, giving the Black Patch a breathing space not known for several years. So far two traveller vans are using the site, paying rent for secure space, power and hot and cold water supply. Through late August and early September 2017, Max Cookson, senior operations Manager at Sandwell, has been carrying out a slew of basic maintenance and clearing activities of a kind we’ve not seen in the park; dead and dying trees made safe, litter and major rubble removed, grounds mown -  all in regular conversation with local parties led by Juls, and including local landlords, Midland Heart. For over four months there’s been no trespassing on the Black Patch. An earlier proposal, pressed by council officers and opposed by the Friends, to site an autoclaving factory on a part of the park have been abandoned.

Sandwell’s Cabinet, led by Steve Eling, who we met again on 7th September, will, at their next meeting on 18th October, be putting out for consultation, a ‘schematic’ for the regeneration of the Black Patch area, along the lines we’ve been promoting ever since we succeeded, ten years ago, in persuading the previous leader but one, Cllr Bob Badham, to put a stop to plans to use the Black Patch as a site for light industry.

Through this extended period one of our key aims has been to restore sport, especially football, to the Black Patch. Steve Eling and Richard Marshall have approved a suggestion that the Friends draw up a ‘master-plan’ for the laying out of Black Patch Park. This will be our continuing work over the next year. The full time scale is, of course, much longer; the journey from piecemeal to strategy, complicated.
As proof of intention Sandwell MBC have promised a temporary portakabin on the park as a base for community meetings, and the early return of sporting activity, and a play-space at the top of Boulton and Murdock Roads for the children of existing residents and, as suggested by Juls Manneh, the children of travellers using the adjacent transit site if they want it.
All involved, whether in the council its partners or among the FoBPP, remain acutely aware of the historic context; of the site across Foundry Lane, opposite the park, of the mothballed remains of James Watt’s Soho Foundry in the grounds of the W & T Avery factory, the association of the park with the Black Patch Gypsies, now memorialised at St Mary’s Church Handsworth, of their link with the reputed birthplace of the great Charlie Chaplin whose mother Hannah Chaplin, long ago found refuge in a vardo on the Patch, as believed highly likely by our patron, Chaplin’s son, Michael.


1. A UK outside the political and legal structures of the EU but treating the rest of Europe as the most important of our trading relationship (Philip Hammond),
2. A UK of good bitter and trains on which most people, regardless of ethnicity, speak English, respect the idea of cricket, and strengthened ties with the USA (Nigel Farage),
3. A new UK enriched by vigorous global trading relations with all the nations of the world, unhindered by EU regulations (Liam Fox, Boris Johnson).

There's also 'constructive ambiguity' about all of these, and perhaps more (David Davis)...
So what our PM has to spell out in Florence on Friday 22nd September, are 1. Brexit transitional arrangements and 2. UK's future trading relationships. That's a template with which to check the contents of her speech, which may give me a clearer understanding of the 'transitional' procedures between now and 29 March 2019, and a clearer understanding of how May envisions the UK's future trading relationships with the rest of Europe - notwithstanding the possibility that she may want to instil, into her speech, David Davis' intentional use of 'constructive ambiguity'. That's quite possible as, after all, today's speech is part of the negotiation. This'll means I'll be as confused after she speaks as I am now - prey, as I've been this last year, to the wordplay of optimists and pessimists alike.
*** ***
23rd Sept - I read Theresa May's speech in Florence. I don't think our PM does 'chickening out' despite suggestion. Vicar's daughter etc. This was a crafted set of words to placate different visions inside her cabinet, party and voters; even a gesture of consolation towards people like me. A friend said her speech's most cogent point was a request to lengthen the transition process beyond 29.3.19, plus 'mood music' to support David Davis in next week's negotiations. Of course this will not please those who have urgent fantasies about a white Britain, and an end to immigration, or the much touted recovery of a form of sovereignty that never existed - as King Canute, according to myth, tried to point out to his courtiers on a beach rather a long time ago. 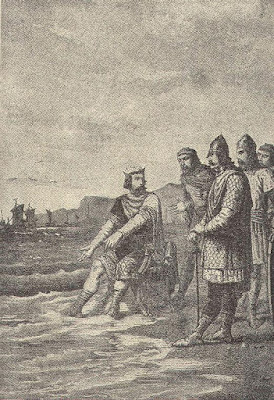 When my dad and mum divorced in 1949 the court proctor (what was he called?) had staff to keep an eye on both parties to prevent meeting or any hint of collusion between them to lessen the legal declaration of their case's breach in the moral fabric. My dad, guiltless of being unfaithful, honourably paid for a private detective to observe him entering and leaving a Brighton hotel with 'another women' - a humiliating pantomime to give the court 'adultery' as a cause. In the case of the Brexit 'divorce' collusion seems to be what the civil 'leavers' desire, while the uncivil ones prefer public repetition of Farage's 'You're not laughing now' speech in the EU parliament on 28th June 2016.
Posted by sibadd