A fact unknown to all but the most acute children - perhaps refugees - because they're wrapped in love, and haven't been around long enough, is that houses, like dogs, furniture, people and, even rocks, are turning to dust second by second. There was a time in childhood, even youth, when I thought all work done on a house - new kitchen, new roof, new plumbing, new decor - would endure as pristine as the photos that advertise the services of decorating and house maintenance catalogues. The young are mostly unfamiliar with entropy - with decomposition and the secret perishings and spoliations that continue at the backs of cupboards, behind cookers and fridges, under fixings, between walls and in roof cavities and footings, where moth and rust corrupt.  But we adults who do want, at least for a while,  to maintain treasures on earth, must work for them - more or less all the time.
Lin's list of things to do never ends. I go along with it - semi-willingly. There are times when I or she or both of us do some unlisted task, which I insist she writes down so that it can be, at once, crossed out.
“What’s the most difficult thing about hanging a door, Lin?”
“Everything about hanging a door is bloody difficult”
When we first assayed the inside of this house off Democracy Street, we saw that between its oldest downstairs room there was a odd-sized doorway – low enough to bump my head; wider than a single door. And there was no door. I could see hinge pintles left and right.
Fiddling through the scrap heap left inside our apothiki - a shed that accompanies most older houses, both workshop and store - I found, near the back, lying on cypress roof ties, a dusty cobwebbed old door, its top half having four panes of old glass set in slender transoms, next to a pair of sturdy cross-pieced planks.* 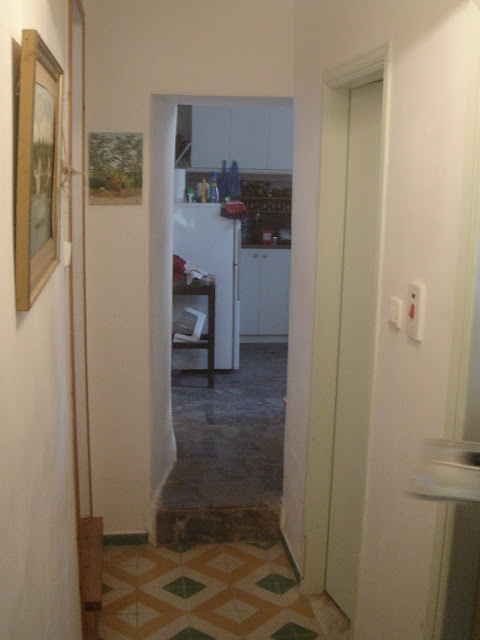 It was pleasing to restore these uneven pieces of old carpentry to their original space – except that the rehung door, when open, blocked the angled passage between kitchen and hallway.

The job done, we cancelled our divorce proceedings.
“Those doors are so damned sexy, better hung than they’ve ever been!” 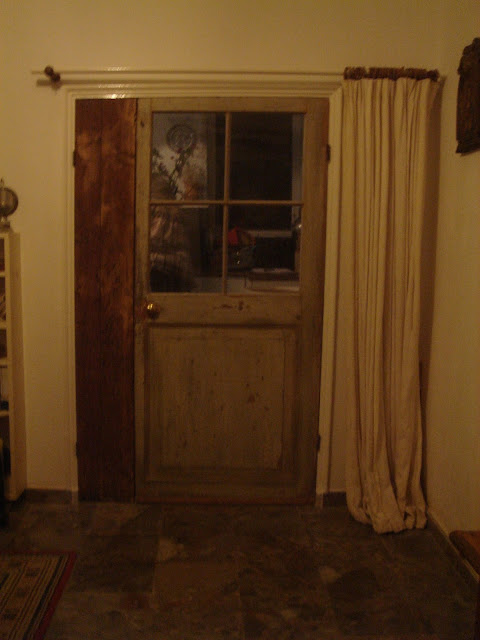 *Half way up the two upright planks, that comprise one side of this doorway, are the initials 'MKM 1951' scratched into the wood. When visiting us in 2008, Kostas Apergis, Ano Korakiana's historian, said these were the initials of Marcos Cosmas Martzoukos who lived here, and 'still lives in the village'. Later this evening villagers at Piatsa told me that he is still alive, used to live in our house, but now lives further north, 'not in the village'. 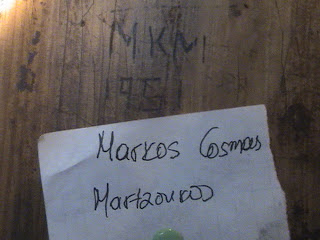 *** *** ***
There can be no greater fanzine for me than the New York Review of Books. In the last two months I've read six editions - some saved up - cover to cover; articles - many with illustrations, line drawings, photos, reproduction of pictures, maps, portraits, caricatures - on art, fiction, history, current affairs, essay collections, short stories, poetry and poets, films, music, politics - domestic and international,  economics, natural history; writers from across the world exploring every continent, and all so eminently readable - not an exclusive magazine for fey escapists from the crudeness of the world - its editors, as I understand, seek rewrites, revisions, over and over, in the interests of intelligibility and accuracy. My mum subscribed until she died in 2012, and passed me on her copies for years, sometimes with underlinings and notes, but this year for the first time, having paid rather a lot for a newstand copy, I subscribed myself. Three came in my cabin bag on the plane, and a few weeks ago my son collected the latest from our mail in Birmingham and brought them here with him. There are on-line versions of the magazine, but I like its heft, the feeling that it's not an object made to gather dust, though I think I'd hesitate, ever, to use it as kindling. Unlike the daily news that bombards - like separate points on invisible graphs - and even distracts for all its sensational freshness, the NYRB arrives with perspectives that have been mulled. Its writing, when I look at past editions from decades ago, lacks the datedness of even the wisest daily. It stands back without detachment.

I've at last read Nabakov's Lolita. I didn't quite know what to expect given decades of celebrated notoriety. I understand that it's strongest criticism is that, as Nabokov writes, 'Lolita had been safely solipsised' - in other words deprived of identity and even existence, made into a fantasy by her abuser. Like The Kindly Ones which I read last year, the book transfixed me, and will sit inside my head like tattoo on my skin. 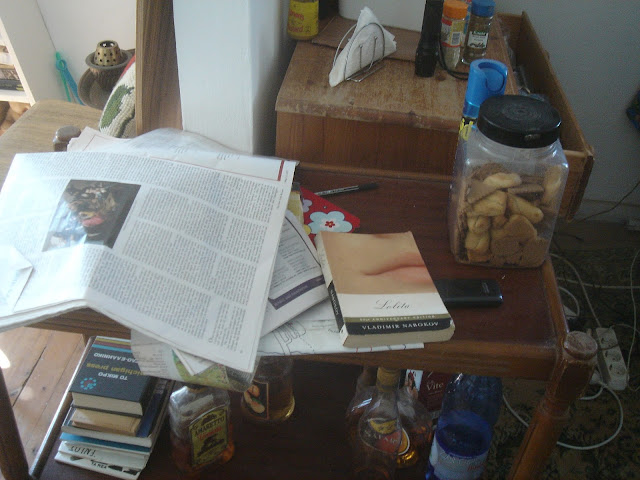 Linda bought me, at a table top sale in Kontokali, a copy of the 50 year correspondence between Henry Miller and Lawrence Durrell between the 1920s and 70s. I've been reading it in the loo, over about three weeks. The book, which has brief and modest connecting commentary by its editor, is long, at times dense, often incomprehensible, with lots of gossip, prejudice, crudity, and  moments of dazzling recognition - and the loveliest writing - when they write about their Greece, their Greeks, their Athens, their Corfu (LD speaking of his last home in Provence '...having fouled my own nest in the same way in Greece' 1959 p.339) and the people they knew here, with whom they ate and drank and loved, and 'fucked' and talked ('these talents, these genii, so far above me in their perceptions, nostalgias, sadnesses, talents, endeavours, and successes in the world' SB), but I'm also struck and even pleased, over and again, by their ordinary unprescience, fascination with unreliable opinion, frailties, illnesses, burglaries, money worries, daft enthusiasms - like ordinary folk; LDs loathing for the crowd, for the spread of motor cars and dead holiday apartments ringing old villages, strangling them, diesel smell replacing garlic and pissoir pong in Paris; all dead now, slipped away, roaming together in one of Dante's circles, friends for life.


In the looming shadow of an oppressive dictatorship and imminent world war, George Seferis and George Katsimbalis, along with other poets and writers from Greece's fabled Generation of the 1930s, welcomed Henry Miller and Lawrence Durrell to their homeland. Together, as they spent evenings in Athenian tavernas, explored the Peloponnese, swam off island beaches, and considered the meaning of Greek life, freedom and art, they seemed to be inventing paradise. In a lyrical blend of personal memoir, literary criticism, and interpretative storytelling, Edmund Keeley takes readers on a journey into the poetry, friendships and politics of this extraordinary time. (Edmund Keeley's Inventing Paradise 2002)

What would they make of The Durrells- so popular on TV, a third series of the family's stay on Corfu for just 6 years - 1935-1940 - a myth being filmed as family comedy on the island even now?