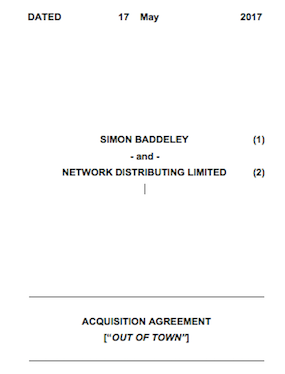 "So perhaps there's a small part of the past here, that won't pass away". Two years after I terminated Delta Leisure's licence to retail my stepfather's Out of Town DVDs, on grounds of 'breach of contract' - have to get the legal language right - and their 'insolvency', I have signed an Acquisition Agreement with Tim Beddows on behalf of Network Distributing Limited, to relicense not ony the existing DVDs in a revised format with new artwork by our son Richard, but to include with this material more of my stepfather's films that have been recently unearthed, and most exciting of all, and more significant for me and others interested in Jack Hargreaves' work including Network's MD, to recover scores of 16mm films and 1/4" sound tapes of Out of Town episodes that Jack stored in his shed at Raven Cottage, Dorset, (more details here) and, after perambulations, are stacked on dexion shelves in our Birmingham garage.

Jack Hargreaves - the invention of the camera from Simon Baddeley on Vimeo.

29th Apr 2017: message from Julian Schmechel  Simon. You are far too modest to agree with this I know, but perhaps without realising it, you have become the guardian of Out of Town, and Jack's other work, recording a now vanished rural way of life. Speaking as one who grew up in this 'Former Culture', and who well remembers taking part in many of the activities catalogued, I am aware of the immense debt owed to you. You may think my words melodramatic; but consider. When you and I are both dust, future generations, (living in the 'cracks between the concrete') will be able to view Jack's programmes, and have insight into the rural past. This is due almost entirely to your efforts, and for that, 'Thank you'
30/4/17 Dear Julian. I was going to get in touch now the days grow longer and you have real sun instead of that helping domestic light. Your words are lovely and not, to me, melodramatic. They do not embarrass me even if I cannot embrace them alone as I've had such help in the project you praise so eloquently - Linda my wife, my son (recall the draft art work), Paul Peacock who wrote J's biography, and now - he prefers to stay in the background - the businessman Tim Beddows from Network Distributing with whose company I'm about to sign a contract (we've been meeting on and off for two years), Simon Winters from Kaleidoscope, many people whose thought and words on these pages have reminded me that there is a legacy to be cherished, the presence of Jack in my head - alive from when I was a 6 year old, and after he left us, Tony Herbert and Ian Wegg who know so much about Southern TV and the date and origin of so many specific episodes of OOT, friends I've not named who've helped in the storing of the old film and sound tape in my garage and its transport in earlier years, Dave Knowles (able to find his way around the Southern TV studios, at Northam Southampton, in the dark) with his re-introduction of Old Country from which he's hardly recovered his investment (a labour of love from one of Jack's original technical team at Southern), Dean Hoffman in Maryland USA who has helped create restorations in draft of the OOT archive and sent them back to me across the Atlantic, Dave King who rescued old OOT recordings from storage shelves that mighty Endemol wanted cleared, their contents discarded - forever; Francis Niemczyk who first took on the recovery of the archive films and tapes and Frazer Ash from BUFVC, who now continues this with Francis, learning all the time. Charles Webster, ex-Delta, who for a long time kept my chin up on the 'Restored to Life' project when it seemed to be going nowhere. You are probably right (I'm not that modest) in saying that I have a co-ordinating role among these friends and helpers and inspirers, and thank you so much for giving me an opportunity to make this list of our 'team'. I, like Jack, value my past. I, following him, respect the past, but not uncritically, sentimentally or other than slightly nostalgically. I'm not one who believes in what the late Zygmunt Bauman referred to as 'retrotopia', in a world where so many find it increasingly impossible to reside faith or hope in the future. I think Jack wavered between optimism and the pessimism he seemed to express in that ode from whose last lines you quote about love of country (not nation, but the countryside and all that it had been and could be). As he said of dying, it didn't scare him too much; what really vexed him about no longer being around was 'not knowing what happened'. I think we perhaps feel the same. Much affection and good wishes, Simon (in Corfu enjoying the sun of beloved Greece and loving the contemplation of dust - ingredient of that unknown substance that we and the world need - humus).


Hugely popular and fondly remembered to this day, Out of Town saw Jack Hargreaves exploring rural life in Britain – reflecting on its character, traditions, history and folklore, and the skills that had passed from generation to generation. With his extensive experience, knowledge and love of the countryside, Hargreaves' easygoing presentation style enthralled both rural and urban viewers – the series becoming so popular it ultimately ran for over two decades. An unsentimental record of a bygone time, Out of Town set the bar high for all "country matters" series that followed in its footsteps. This volume contains the 35 editions that remain from 1980/1 – including the unbroadcast 21st anniversary special and an episode never previously released on DVD - being the last episode of Out of Town Series 22 (of the total 23 OOT series) in which JH warns, in an episode broadcast in Sept 1980, that there will only be one more series, and signals that 'it's time to go.' (My stepfather saw the writing on the wall for the future of Southern TV!). No-one had a complete version of this OOT episode on record, but it was discovered that one half of it was held by Ian Wegg and the other half by Jack's great cameraman, Stan Bréhaut. Stan's widow, Marion Bréhaut, and Ian Wegg gave their two halves to Simon Coward of Kaleidoscope. He has put those two parts together and remastered the whole episode for Network. It's not the only extra on this new OOT issue, but I'm so glad it's resurfaced and so grateful to Stan's wife and Ian. Other material on Network's OOT Vol 1 DVD, includes Oliver Kite's Summer in Kite's Country, as well as Jack's Learning to Fish, a B & W film he made in in 1966. More material in this volume is, as yet, unannounced by Network.

*** *** ***
Saissetia oleae colonies extract large quantities of sap, causing general host debilitation and build-up of sticky honeydew deposits on nearby surfaces. The honeydew may attract attendant ants. Sooty moulds grow on the sugary deposits. Badly fouled leaves may be dropped prematurely. The older insects are usually quite easy to see as dark grey or brown-to-black lumps on leaf undersides and stems.
As a result of some pest-on-predator imbalance, perhaps caused by an exceptionally cold spell in March, citrus trees all over the island - and probably beyond - are affected by a plague of black scale insects. The females settle on the underside of a leaf and attach themselves to it, sucking sap; weakening - possibly fatally so we have been warned - the whole tree. The males fly between leaves and tree spreading the blight. This is the first sight we've had of this problem in 10 years.
"I assume the females also fly" said Lin "until they attach themselves"
The female insects, once clustered under a leaf, exude honeydew which attracts the spores of the same damp sooty mould that settles on many surfaces during winter. The mould, covering the top-side of the infested leaves, prevents photo-synthesis. Columns of ants march up and down trunks, branches, twigs and over leaves, feasting on the honeydew, but serving no purpose other than to satisfy their appetite for the sweet stuff.
We had hoped that new growth would surmount the problem, but swiftly the insects began colonising new young leaves. No-one we asked quite knew the best way to treat the problem, or they came up with chemicals of uncertain safety and doubtful efficacy.