I have been in charge of the children – 3 and 5 - for the first hour of each morning of the stay. It gives Amy and Guy – on holiday – longer to sleep, and even Lin. If a child doesn’t wake me – probably by climbing into our bed, I, when I rise, head downstairs in nightgown and slippers a step at a time, knee joints hurting, but using the outside steps from our side balcony, lined with wisteria and honeysuckle, to avoid the creaky stairs above the guest bedroom, re-entering the house like a burglar, first peeing on the compost in the garden, before I wash and get breakfast ready in the dining room next to the kitchen, putting away, last night’s washing, handling each item like spillikins.
Hearing an overhead thump of a waking child I hurry out again, ascending the steps to usher a pyjamad grandchild, perhaps both, downstairs, back the way I came, saying ‘shush, shush’, finger to my lips.
“Have a wee. Come on go to the loo. Yes put the seat on top. V.good. Let’s get this nappy off Hannah. Go go. Shoo shoo. Excellent. I’ll put that on the compost in a moment. Now wash hands. Wash! Very good. OK, sit at the table. Now!”
Oh to have the craft of Miss Pross, to be drawn by Phiz, immortalized by Dickens for my mundane morning valour. I issue orders. Mostly ignored; bringing drinks, a bottle for Hannah, cup for Oliver, then a flaky chocolaty cereal in bowls set before each child, to be followed by a small croissant. Scheherazade told tales to save her life; I tell them to keep my grandchildren eating breakfast, and quiet.
“One day the sun didn’t come up in the morning..."
I’ve no idea where this is going, but I win a good few minutes of compliance thinking up what that would be like, starting with everyone thinking the clocks are wrong but slowly grasping that lots of people are now in a quandary as to what to do, apart from being astonished, and increasingly worried. “Shall we get up? Stay in bed? Where’s the sun? Phoning around, listening to the radio, looking at the TV. Yes we’ve phoned Australia and China to see if the sun’s still over there, but they say ‘no, it should be with you by now. What on earth is going on? Do we go to school, to work?’ ”
Oliver’s fascinated. I’ve got some control, authority. Hannah, at 3, probably doesn’t understand this story, but she follows Oliver’s rapt attention to my words.
“Eat your cereal or we stop the story.”
I get breakfast done and start helping them get dressed, Amy having left two piles of clothes in the dining room.
“Tell me more” says Oliver
“Where do you think the sun has gone?” I ask, since I too have no idea.
Could an android ever be programmed to deal with the moving three-dimensional co-ordinates of dressing a small child, getting legs in pants and trousers, head and arms through the right holes in a T-shirt, pulling on socks so the heel’s in the right place? As it is, at a certain point in the putting-on, the children help, stretching, reaching, leaving me to pull down, pull up and tidy. Phew.
“In places where there are no street lights, people looked up at the stars. The Milky Way ran like a great river across the sky. Some could see the Plough and the North Star. Down in Australia they could see the Southern Cross but*…where are your shoes? Ah. Got them. Left foot! Push… but they could not see the moon. People were still too sleepy and too puzzled to be frightened. “What the heck is going on?” they asked standing in the streets, peering out of their windows “Someone needs to do something”
“Do you know why they couldn’t see the moon, Ollie?”
“Why not?”
“See if you can guess. Let’s go and see if the kittens in the apothiki are OK”
A north wind was driving fluffy clouds. Since it felt too cold for the beaches we’d enjoyed on previous days. On their last full day we managed to agree, almost amicably, to visit the winter fall at Nymfes – a village on the slopes of the island’s northern range.
“Which way?”
“Through Skripero, to Trompetta then through Horespiskopi on the road to Roda. But after Ay Douli just beyond Episkopi take a right on a winding road for two kilometres.”
“We’ll follow you” said Guy.

I’d have preferred to take the bends up to Sokraki, then down to Zygos and, via Klimatia, arrive at Episkopi and the turn to Nymfes (which means 'brides'), but no-one will listen to me so I keep my thoughts to myself rather than fuel arguments - to the power of four.
There was a signpost next to the platea in Nymfes, and a small road leading east. A kilometre along there we parked the cars beside the most beautifully sited football field. In the middle of nowhere, backed by rock at the head of a valley that looked out on tree covered mountains. 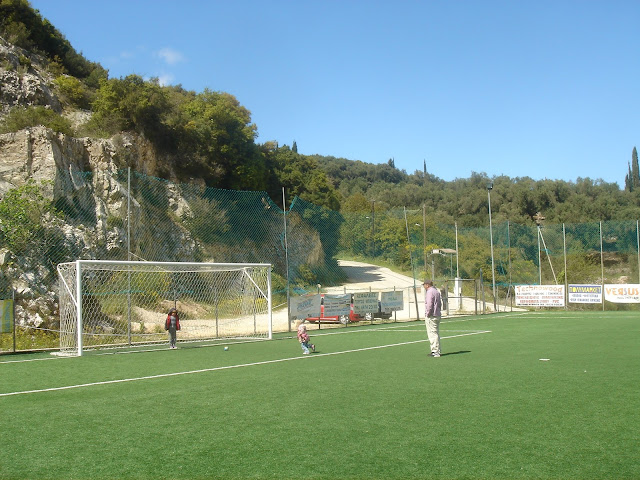 Guy and the children had a kick about on the perfect astroturf.
“Even I would come to watch a football match here” with a good seat on the small Adriatic-facing grandstand.
We set out to walk to the waterfall. The wind was still chilly, now and then whistling in the trees beside the road; an urgent stirring of leaves and branches. On a bend a steep set of earth-dug steps supported by wood-pegged risers and the rickiest of handrails led downwards. The falls, more a pair of thin cataracts, was visible between tall narrow tree trunks reaching-up from the ravine. Leading, I set off on my bottom. The family followed.
The water fell with pleasing noise into a clear lime stone pool before running away into thick woods and deep green ground cover. 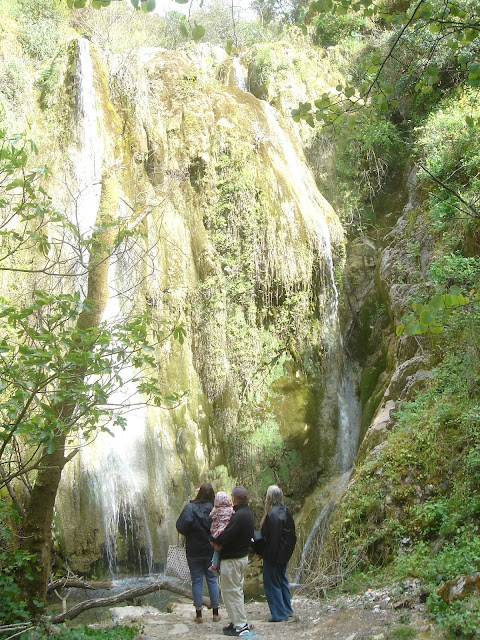 Climbing the forty steps back was easier.
“Linda and I will go back for the cars” said Guy “you walk on”
The walk with Amy and Oliver and Hannah, towards Episkepsi (meaning 'visitation') , which until now I’ve always muddled with Episkopi (meaning 'oversee'), was a joyful trudge, rising gently upwards through olive groves, our road pot-holed now and then by rain, making it trickier to drive Hannah’s pushchair. Each turn was a promise of a possible sight of the next village, while, looking back, we could see the football field, a green postage stamp far below.
“My legs are hurting” complained Oliver
“Stop that” I said, though later I realised I’d not given him a stick which, with me, he’s come to regard as a necessary part of a proper walk.
Later when recounting the day as the children lay in bed I mentioned this grumbling about ‘legs hurting’.
“I was fibbing” said Oliver
I suspect he was commenting on Hannah in her pushchair.
The day was a consolation, taking my mind off them going back to England the next day, when, strolling down N.Theotoki in Corfu Town, I heard a familiar rumble, looked up and caught a second’s glimpse of their plane rising, wheeling northwards. Gone.


*The story we invented together...You don't want to know or perhaps you do, in which case it turns out that through the imaginatory genius of a young astrophysicist called Sabrina Pasterski that we learned that the sun had, for unexplained reasons, been sucked into a worm-hole, but her ideas were, at first, laughed out of court, after many scientists backed by generals and political leaders tried to set the moon alight with a massive series of rocket based thermo-nuclear explosions with which they hoped, fruitlessly as it turned out, to set the moon alight, hoping it would serve as a substitute sun. It was Sabrina who, through the invention of a device called 'the wobbly spade' (Oliver's contribution to the tale. A tool for altering the space time-continuum), and precise and brilliant calculations and the use of a rocket ship that she had built in her garage, that Sabrina, with the help of another even younger genius - just 10 years old - called Mohammed Squarrrekkjhwtwwr Urgagaghtere-ben-Grrrkch (called 'Mo Squerk', for short) that the earth was drawn through the same worm-hole to rejoin the sun in a different universe. In the next episode Oliver is waiting to learn how the moon, gravely damaged by the ill-thought attempt to set it on fire, was also brought - if indeed it was - through the same worm-hole, just before it closed (watch this space - literally).