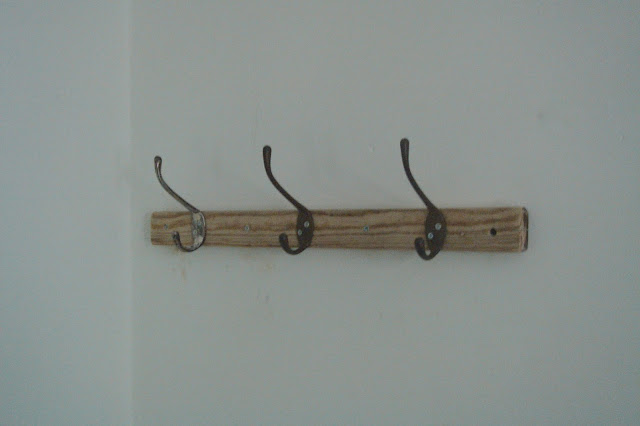 The whole job – tidying up the piece of wood from the shed; cleaning up three old coat hooks; centring and spacing them and fixing them to the wall in Amy’s bedroom, took an hour. Those brash and useless diagrammed and illustrated DIY books! Never a chapter on creating even holes in an old wall which, behind render and plaster, is made of undressed stones and old mortar. For the first two holes the masonry drill entered fairly sound mortar, but two and half inch screws through countersunk holes in the wood into rawlplugs, left the hooks insecure. I could feel the give. I made two extra holes in the wood, offered it to the wall with a spirit level, making small marks on the plaster to start the hammer drill, which first hit and pierced a stone. Making the next hole, the drill crumbled the mortar, slipped and made a crater of broken render and plaster. I filled the cavity, and the better holes, with a dollop of quick drying glue from a gun; tapped in larger rawlplugs flush with surrounding plaster; wiped excess glue from the wall; presented the tips of four longer screws to the prepared rawlplugs; tapped the wood slightly home; tightened the screws. Three pulled firm. Where, as expected, a screw went on turning despite being home, I relied on its glue filled hole to do the holding. Half an hour later the hooks were fit for use.
*** *** ***
Nico and Sophia Zervopolou, neighbours, invited us to a celebration at their family church on Monday...
Στην Αγία Τριάδα 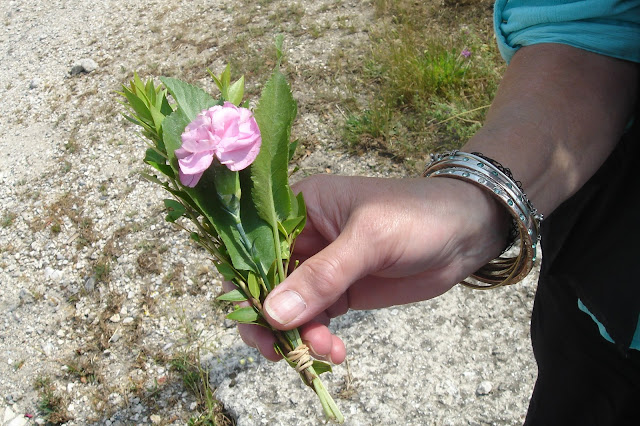 Outside the church as we enjoyed cake and coffee, Dr Savannis gave Linda a posy
Lin said later "It's made up of a carnation, myrtle leaves and something else whose name I didn't catch"
"The Trinity" he'd said, smiling "All are sweet smelling"
"I've never understood the Trinity" I'd said
"Nor I"
*** *** ***
Richard Pine's 11th May letter from Greece in The Irish Times:


Oscar Wilde said every American bride is taken to see Niagara Falls on her honeymoon. “It is the second, if not the first, disappointment of married life.” Alexis Tsipras took his bride – Hellas – to Brussels. The bride contracted Brusselosis and the honeymoon ended abruptly.
The reality of married life kicked in – or up – sooner than either had expected. There were so many factors militating against the marriage. When the engagement was announced, Hellas had been warned by other jealous suitors that the union was doomed, that her meagre dowry would be spent irresponsibly and that her reputation for reckless spending and handing out tips to her worthless relatives did not bode well for a prosperous union. Her bottom drawer, and all the other drawers, was bare, and the unhappy couple would be condemned to live beyond their means, ending their days in the workhouse before the year was out.
Even the groom’s unruly family had doubted that the marriage would work, if Hellas’s relatives living abroad had anything to do with it. Each of Tsipras’s brothers had a different view of how the marriage should be conducted. They urged that the family that prays together, stays together, but the family that thinks alone sinks alone. The worst insult they could throw at Tsipras was that he would not be master in his own house – that Hellas was a shrew as well as a spendthrift, eager only to get jobs for her family at the expense of others.
Only his best man, Yanis Varoufakis, stood by him and fought off the creditors and the naysayers as best he could.
Hellas came from a poor family. Ever since her birth, she had been in debt. Twice before she had been bankrupt through no fault of her own, and her foreign relatives had taken control of her finances. Too late, it seemed, for all this time, her wicked stepmother in Berlin was threatening retribution. Hellas was marrying purely for love, because her beloved had seemed a knight in shining armour. Now the armour was tarnished, badly in need of a Silvo polish, but they couldn’t even afford Brasso.
When the debt collectors assembled at the door, Hellas knew that she and Tsipras had only the wit of the loyal Varoufakis, and the tiny savings she had managed to hide away behind the central heating, to save them temporarily from penury.
They had heard of a wise counsellor, the Krugman, who came to Athens and gave them what encouragement he could. He would explain to their creditors that to call in all the debts would totally blight the young couple, who were completely inexperienced in household management. All he could get from the creditors was hollow laughter.
Tsipras had married with nothing in his pocket but hope and honesty. He had run out of one and was fast losing his grip on the other. His were the actions of a brave but foolish man. He was discovering the ruinous power of love. In his heart he knew that Hellas loved him unreservedly; in his head he knew that she would desert him if she got a better offer.
Eventually the day came when they fought bitterly over their mistake. “You brought me no dowry, how do you expect me to pay your bills?” he yelled. “Can we not compromise on my virtue? Wouldn’t a bit of cuckolding get us out of this mess?” she retorted tearfully.
Spoiled goods
Somewhat ungentlemanly, he snapped: “When I met you, you had already been interfered with. You were spoiled goods. I thought I could make an honest woman of you. Make you see the error of your ways. You could have been a reformed character, proud to hold your head high again.”
“You were so glamorous,” she screamed. “When you raced into the Field of Politics and went from nought to 100 in a few months, how could I resist you? And now look at you, and that ne’er-do-well Varoufakis!”
He responded:“You have been on a spending spree, and now we are both up a dark backwater with no means of propulsion.”
Closeted with Varoufakis, the only man he knew he could trust, Tsipras wondered how much longer they could hold out before the situation became intolerable; they would capitulate, compromise Hellas even further, and to the snarls of the debt collectors would be added the outrage of his own family. He would be disowned by both sides.
There may be a trial separation. Certainly a trial. They may be able to renew their vows, but both families will be breathing down their necks. If the marriage, and Tsipras’s career as a boy racer, does come to a miserable end, we may hear the word “Hellas!” on his dying lips. And some French joker will quip “Did someone just say “Hélas”?