Early Tuesday morning - about 3.00am - I went downstairs to join Lin who was up late in the kitchen after collecting Richard and Emma from East Midlands off a midnight flight from Turkey.
"I've been having a nightmare. Make me a cup of tea...Please"
"Go on then"
"I was taking an exam.... Thanks...I was taking an exam...on gardening. I thought I was going to do quite well. But I couldn't answer any of the questions. Somehow I lost my paper. Lost everything I needed to at least write something. Time seemed to speed up. My second pen didn't work. I couldn't find the exam room. I had to ask the invigilator, a young American soldier, who made me stand to attention while I asked for assistance. He was unhelpful. It was humiliating. The fiasco seemed to go on for hours. One problem following another. I couldn't complete a single question. Didn't even start on one!"
Amy's friend Liz, who was also up late suggested - via Facebook - that my dream might have come from looking at the gardening magazine Amy gave me for Father's Day - along with a large Toblerone bar.
It is so tempting to use apparent short cuts when dealing with problems on my allotment. For example why not deal with weeds, especially couch grass, by spraying them with glyphosate? Why not lay into slugs and snails and the many other insect pests with organochlorines, organophosphates, carbamates? Punish them! Notwithstanding endlessly rehearsed environmental arguments, I'm beginning to grasp that there's something else I'm supposed to learn about gardening. There's no substitute for constant attention, daily maintenance, alertness, growing experience and learning, steady work and intelligence. I must use my wits. I realise now that 'pottering' is not something to be mildly ridiculed. If I hit nature head on - or try to - I may think I'm 'winning' for a while. Insects will die; weeds will wither  - for a while. Nature hits back by committing temporary suicide or becoming dependent on my shop-bought nutrients. As in intensive agriculture this deal involves growing crops in a more or less sterilised medium regularly re-sanitised and re-fertilized for successive crops. The off-shoots of this more or less effective process are sold on via a confusing repertory of proprietary products to ordinary gardeners across the land. Of course I risk drowning in the fruitless study of endless abusive argument - Rachel Carson versus Dr. J. Gordon Edwards. ....'continued page 94' as 'Private Eye' would say) 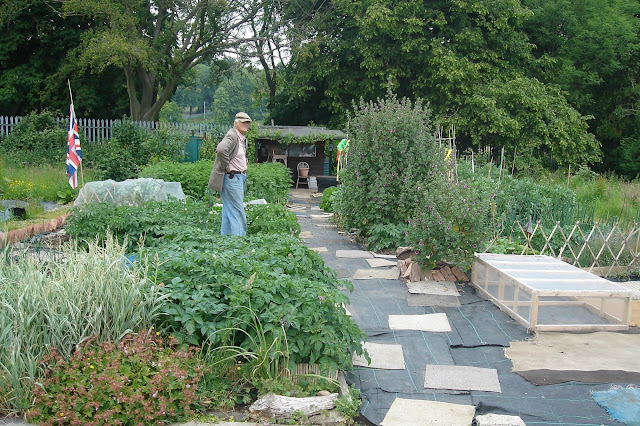 For the moment I am delighted at my allotment. Two years ago I was served an official notice to the effect that if I didn't show more signs of working my plot I would be asked to surrender my lease. Nearly four years ago I was struggling. I didn't always look forward to going out to the plot - just 5 minutes cycle ride away. Now.... 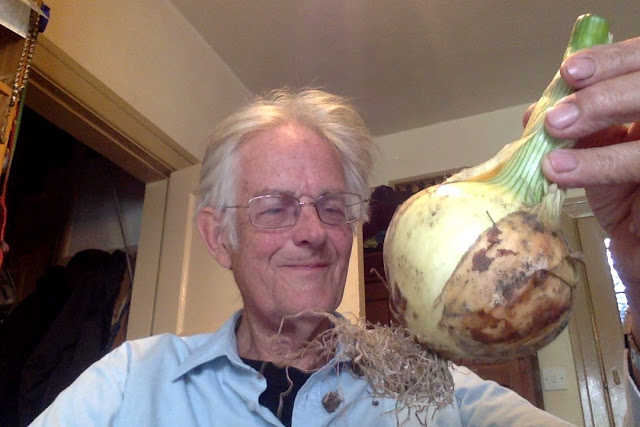 At last there's stuff coming out of the plot to which Linda will give the time of day. None of this would be possible had I not realised that I have the inestimable advantage of not having to run the allotment like a business. I made a decision last spring - that regardless, or almost regardless of what i could afford, no expense would be spared to make my allotment a success. Of course I've have miles to go before I sleep; the task is as endless as a piece of string. What's been achieved so far would have been impossible without investment in 'black gold' compost - six builder's sacks of it over a year, two similar sacks of topsoil. Add to that my decision to make a network of paths around separate beds that would ensure that in no case would it be necessary to step on the earth when digging, sowing, weeding, or cropping. Add to that my partnership with Winnie who gardens the plot when I'm there and when we're away.

The other day seeing black fly on the tops of the broad bean plants I prepared a mix of detergent to spray. Coming back the next morning prepared to kill by drowning and slipperiness I found that this years plentitude of ladybirds had done the job for me in one night. Instead I pinched out the tops of the beans to keep the growth in the pods that are already croppable - delectable little beans that take a while to strip from their pods at the kitchen table.  Of course I can't always rely on ladybirds, but the very health of the crop as a result of the attention to the plot and the good compost worked into the top seven inches of the soil helped, especially as so many of large stones and other hard debris have been systematically removed as we've worked the earth. These several hundred carpet tiles, recovered from an abandoned garden we were tidying with Handsworth Helping Hands have been useful, allowing swift temporary paths and as a supplement to the weed-suppressing fabric pegged down by Winnie across the plot. People visit me on the plot. Ron was round the other day to discuss Sandwell Council's consideration of a S106A to build on a third of Black Patch Park. 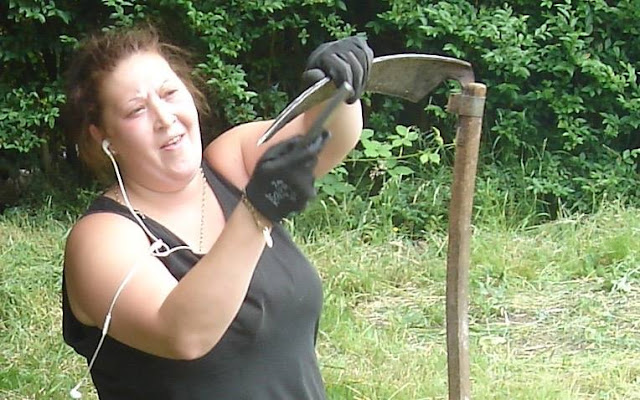 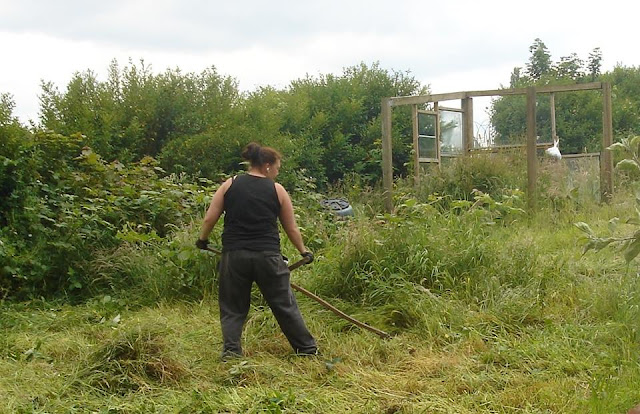 A swift learner she called me her 'ballet teacher'. "Flex your legs, Winnie" "Sweep the ground!" "Get a rhythm" Sharpening too, and adjusting the lay and the grips. The hay we've scythed is piling up nicely against the fence at the bottom of the plot, to add to the compost factory there. At least half a dozen frogs leapt clear into the long grass left along the hedge of plot 15 and the foot of plot 13 where there's a sturdy bramble patch to gve us blackberries late summer. Getting organised I've mapped the plot... 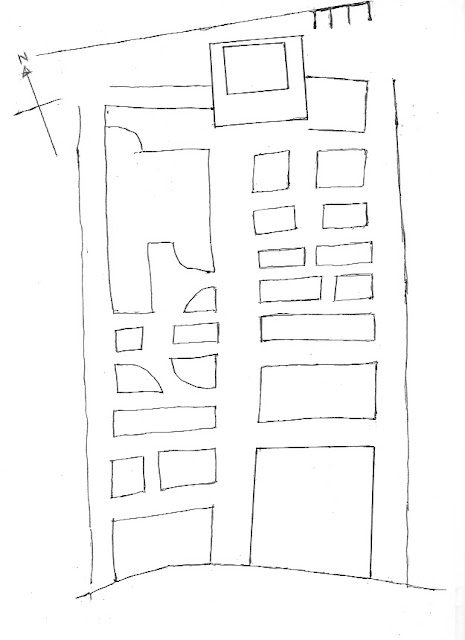 ...to help me keep a record of plantings and croppings; to start rotation and queued sowing to avoid gluts.
There's also been a small calamity. I hardly want to dwell upon it. A letter to the allotment committee just before the meeting the other week:


Dear VJA Committee. Re bees. As you know we had a problem on the allotment last Sunday 7th June. For reasons still unclear but experts suspect was a missing queen following a swarm, the bees which for 3 years have been fine and so welcome, went 'feral', stung two people and frightened away several families from their plot that afternoon. In under 30 minutes I was on my plot with my apiarist friend – Gill Rose - who had come more immediately to the 'rescue’ after a phone call from me. Arriving at my plot I experienced a threat - even on the path while well away from the hive - from a dozen angry bees, and had to back off slowly. Another experienced apiarist – Nigel Fleming (Birmingham Beekeepers Association) - joined us and it was very regretfully decided by him and Gill to apply apicide to the colony. I support their judgement. So now for the first time since June 2010 we have no colony of bees on the VJA, tho' there are still some wild bees roaming the site. I have met and spoken to people affected including the people stung and the people with young children who'd been threatened and had to leave the site. All understood the dilemma. We are preparing the case for reintroducing bees on the allotments and want to make sure we've covered every angle on top of the hazards we had anticipated when the bees first arrived – liability insurance, accreditation of the apiarist, risk assessment, netting around hive, first aid kit to hand, approval by committee after consultation with plot-holders. Everyone I've spoken to seems keen to see the bees back and is sad that such drastic action was needed. Any advice? What is the view of the VJA Committee on re-introducing a bee colony to the site? Did the people directly responsible respond the ‘bee crisis’ swiftly and responsibly; call to Simon from Danny W at 15.37 on Sunday? - attendance at the hive by 16.10; - decision to apply apicide when all bees had returned to hive; - 18.15 Simon notified by Gill that colony has been destroyed; - from 16.00 Simon on site talking to people affected, with follow up on subsequent days and via Facebook and email to VJA committee members Kindest regards, Simon, Plot 14, VJA

Two days after the bee colony was killed I ventured into the net surround of the hive. Gill had removed the top tiers. In what was left of the massacre was a plastic sandwich box. Lidless. Lining its bottom, a mass of small scorched corpses. Blackened. Around the edges of the hive a few bees still stirred weakly. I set about clearing up, putting the remains on the compost.
*** *** ***
In Ano Korakiana last weekend - a party with music, singing and dancing at Piatsa...