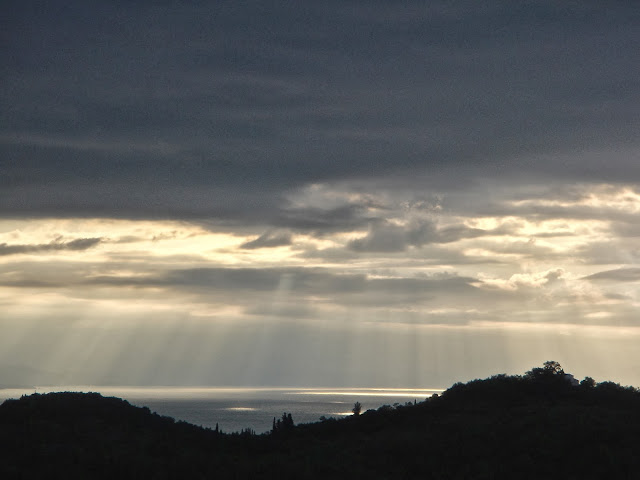 “It’s a cheese dream day” said Lin
“Go on”
“On days when it rained too much to go out, my mum promised 'cheese dreams' – cheese spread on buttered bread and fried”
“Toasted cheese sandwich”
“No 'cheese dreams'”
It has rained from the afternoon. I’m in vest, shirt and sweater. At night we need the quilt. Summer’s furnace light no long leaks through shutters, dancing bright motes of dust and sparkling mum's little chandelier we brought, so carefully packed, from Scotland. 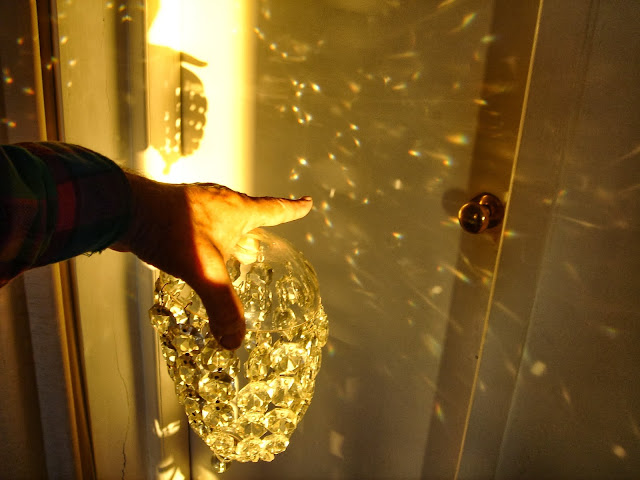 “A few more days like this and the house will have lost the heat in its walls”
“We’ll be lighting the stove. Putting on our electric blanket”
But for brief patines of silver on the sea, rain and clouds advance our landscape from the south. There’s still an absence of the penetrating cold I take for granted in the Highlands, which - plus grief - set me back last winter until we returned to Greece at the end of March, when 30 minutes with a Greek doctor cossetted me to health, along with antibiotics an English GP wouldn’t prescribe, plus generous possets, at the Pyrgi doctor's suggestion, of chicken soup from Cinty down the road.
On Wednesday in sunny weather I was helping Lefteris, Foti and Adoni with pressing the last of their wine – some juice from Zakinthos grapes but some, this year, from Lefteris’ own garden, the weather not so hot as to wither them on the vine as has happened the previous two years. 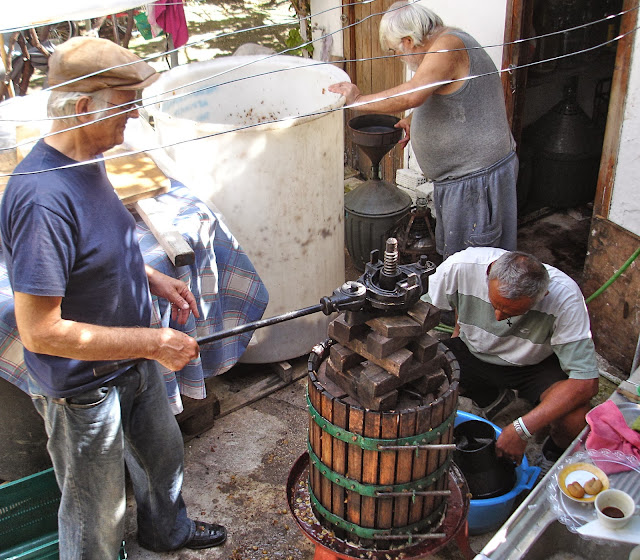 After the final turn of the screw the press is unscrewed and taken apart and we dig our hands into the spongy cake of tsipira (what we call pomace) pulling it out in crude wedges to add to the garden compost.
Lin and I were invited to lunch as a reward for our help (as if helping is not reward enough!) and we laughed and enjoyed small crispy skinned fried fish, cold cod, bean soup, salad, bread and wine with all the family. We lingered as conversation grew into debate
“We are talking Politics” explained Natasha in English. You know Golden Dawn?”
“Ne” I replied “Chryssí avga χρυσή  αυγά”
I know quite well the difference between αvgí and αvga, but, having decided to call them the 'eggvolk' I thought I’d try it out on Greek neighbours and was rewarded with hilarity. Lefteris observed how well the BNP are doing in UK, mentioning a double figure percentage he’d seen on TV. “They are thriving on present misery” we agreed.
I disagreed that the British National Party was having as much success in the UK as Golden Dawn in Greece; rather the opposite.
Cinty’s view, she shared with me later, is that one thing a lot of young Greeks especially won’t stand for, people who might, because of the crisis, be inclined to sympathy with the eggvolk, is the suppression of a right to speak your mind...“with the murder of Pavlos Fyssas they have shot themselves in their Greek foot”
*** *** *** 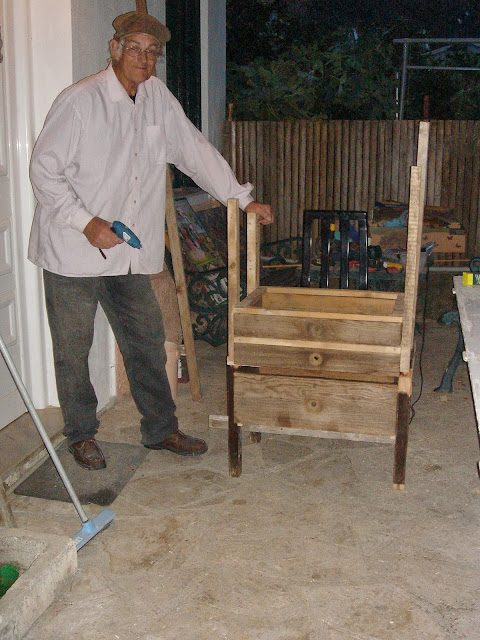 Lin and I have been using the rain to work indoors on the wardrobe in our bedroom. She's taken over management after I retreated frustrated at the intractability of the angles involved.
Under her guidance I’ve been planing and trimming surfaces, creating angles that accommodate the illogical geometry of the space in which we’re working. Shavings and saw dust proliferate but it’s slowly and steadily coming together. 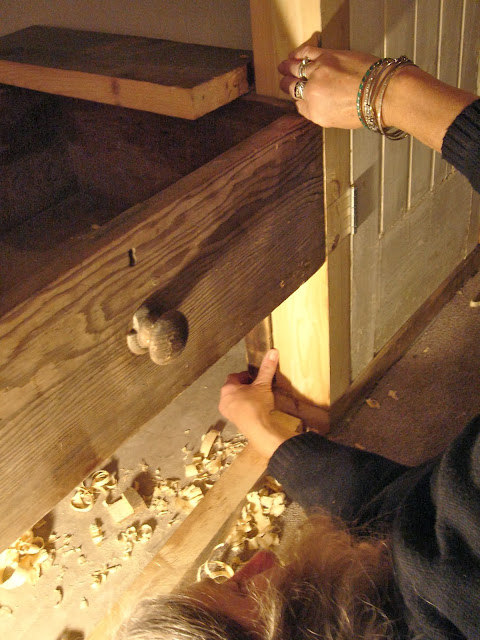 This Saturday evening there was a knocking at our door. It was Angeliki and her mum Anna Metallinos. No they wouldn’t have a drink, wouldn’t stay, but asked if we’d like to come to the village museum.
“We never knew you wanted to see it. I’m so sorry”
This ισ a conspicuous slightly narrow building in the centre of Ano Korakiana we’d given up hope of visiting. 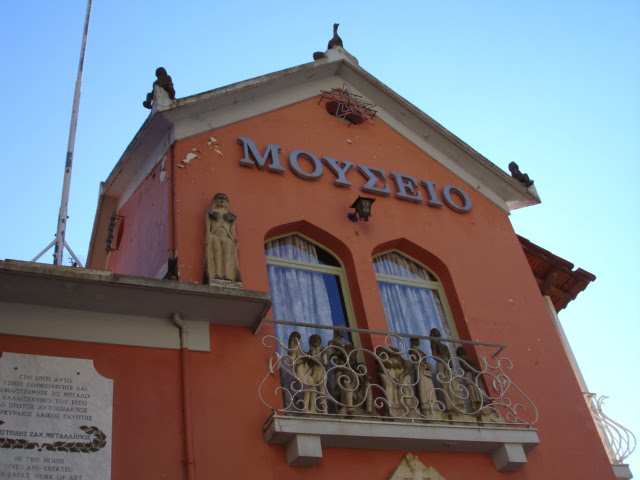 In the seven years we’ve been here it has never been open. Tactful attempts to seek an invite had not succeeded. We’d decided that the Metallinos Museum was not one, in the sense we had understood the term; not really a place open to visitors; rather a private house that happened to be called ‘ΜΟΥΣΕΙΟ’. A plaque tells passersby in Greek and English that ‘In this house lived and created his great work of art the first self-taught popular from Corfu sculptor Arestides Zach.Metallinos’. Two days ahead – meta-avrio - at 10.00 suited our bi-lingual friend and neighbour Cinty. She agreed to join us to help with conversation. 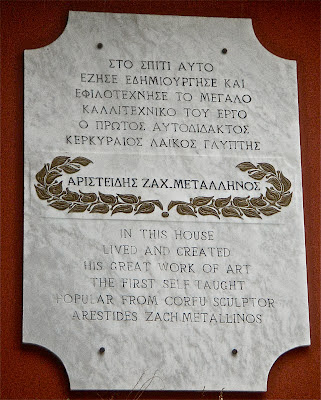 
Dear Simon and Bay. Just a quick note to confirm that the sale of Brin Croft and the Lochan has successfully settled. The Purchasers’ Agents have authorised release of the funds and accordingly the keys have been handed over. With kind regards. Yours sincerely,  James Wotherspoon. Macandrew and Jenkins WS LLP

I could hardly not be anything but beholden to a house that stood close above the sweet river Farnack where, with my sister, I’d sat with mum as, at teatime on November 1, she breathed her last. The sale for a sum that derided shared pessimism and a rather mean Home Report – required in Scotland – vindicated mum’s good choice

*** *** ***
It seems hardly possible but it looks as if I may get my wish - a loose footed mainsail on Summer Song. I'm not a fan of the almost universal rig of modern yachts over the last 50 years - the Bermudan - preferring gunter or gaff. The Bermudan mast feels too tall. The sail though elegant is unwieldy and without a generous belly, and, in a world of sudden squalls, not easy, especially when single handed, to lower or even reef in a hurry. (see - parts of a sail) In the search for a seamless luff the Bermudan main is near married to its mast, running up a groove or hanging on slugs in that groove; an arrangement that's all about getting a tight luff to improve sailing close to the wind in competition - no great concern of mine. Summer Song's main has been a challenge when it come to reefing or furling.

Her previous owner, Norman, had been wont to stuff towels in the canvas he rolled round the boom to try and give Summer Song's main a wind-friendly shape when reefed. Imagine doing that in a sea and a stiffening breeze. So Dave has been drawing diagrams.

At first we thought of using another genoa rigged in the main triangle, but now he's found a mainsail that rolls up between head and tack, like a roller reefing jib; the type that reefs into a 'box' attached all up the back of a Bermudan mast; almost universal on modern charter boats. On the clew there's a sturdy pulley linked along the boom to a roller furling gear just below the gooseneck. All up the luff runs a stiff length of aluminium around which the mainsail furls and unfurls. The furling sheet runs from the clew pulley, just above where the main sheet attaches, to the furling gear and back to the cockpit so that both main and jib can be reefed from there.
"Blimey Dave! Make it happen"
"I've got the main and I think there's a furling reel fell in the sea up by the harbour. I'll go look in a moment"
Posted by sibadd