Every time I wheel my bicycle down the public path from Democracy Street, beside our house, to the lower road to cycle south I need to check my tyres for small puncturing thorns – pretty flowers like small yellow daisies grow into soft green seeds....

... that dry, tenacious hard and multi-spiked strewing themselves along the rocky path beneath the greenery of the ground cover, attaching themselves to my tyres, breaking off, if not removed, and working their way through to inner tubes.

“We’ll just have to drag it all up”
“But there’s so much of it”
“I know and I thought it was so attractive”
“It must spread on shoes and paws. When there were sheep and goat around these little spikes must have worked into their hooves. Horrid if you’d try to walk this path barefoot.”
“We’ll not only have to unroot this stuff. We'll have to sweep up all the seeds that are mixed up in it and on the ground”
“I could use another path to and from the lower road but ours is the only one I know that doesn’t have steps” 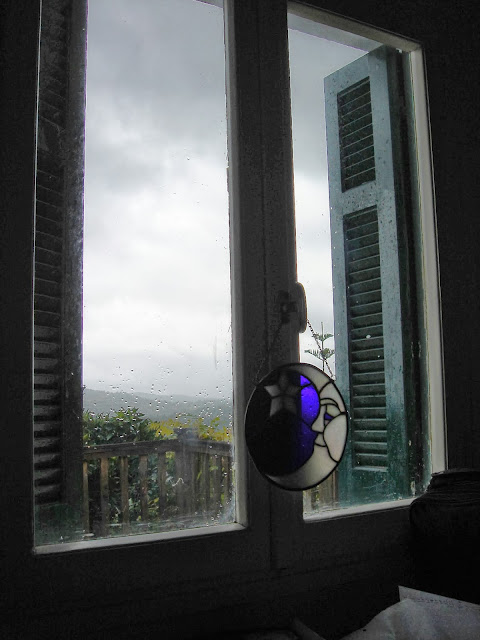 On Monday the weather turned grey, cooler and humid, a steady south wind streaming the new Greek flags on the crags above the village. 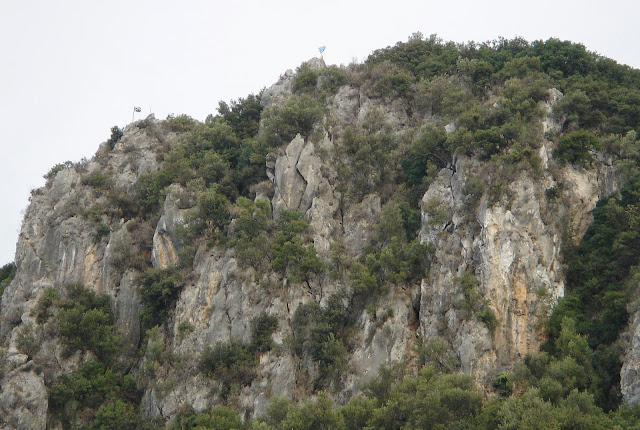 By noon increasingly jaundiced overcast released a soaking downpour that continued for an hour, interrupting Lin’s work remaking the uneven narrow steps between our garden and the terrace beneath the balcony. 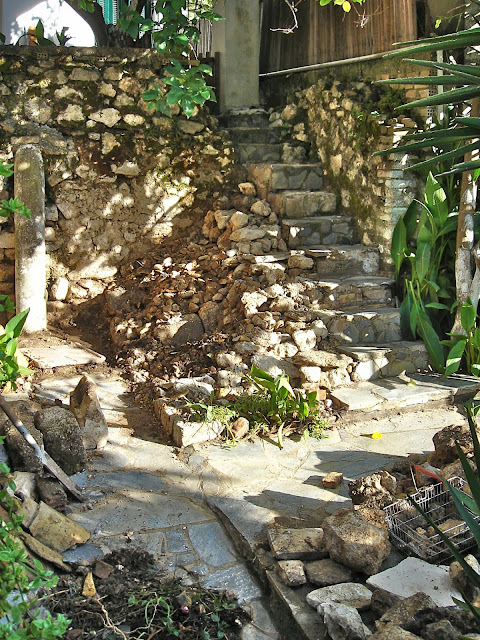 With the SDS drill set on hammer using a broad chisel I shattered two small chunks of obtrusive stone, leveled the front of some steps and eased off plaka from two more.
“I do like using this thing”
“Your man-drill.”
“Yes indeed, And it’s 5 minutes to 2. I’m done, so no noise in siesta”
I went back to the wardrobe project in our bedroom while Lin continued on the steps. By the end of the afternoon our bedroom was untidy with tools and the support I was making for four fine old pitch pine drawers that we’d recovered from Brin Croft and brought in our hold luggage was not coming together as we’d planned. 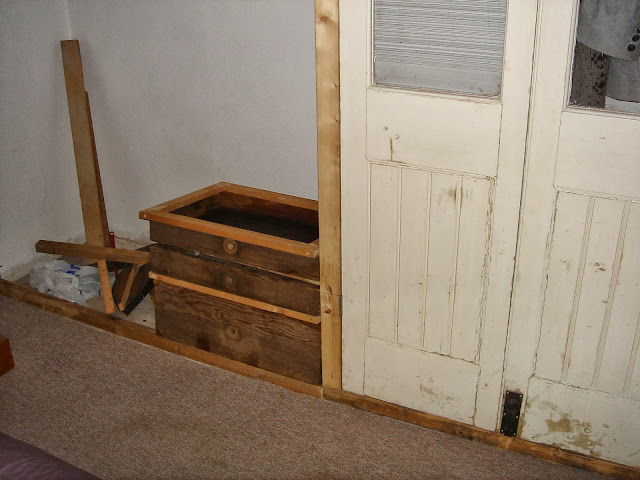 The space we’re filling has no right angles. Even the floor and wall are less than horizontal and vertical. The ceiling beam to which the completed doors are attached starts 55 cms from the wall and is 10cms closer at the other end of the bedroom, whose ceiling is 5 cms higher at one end. The whole beam is inclined at a medial angle. There’s no point of reference. My prototype chest for the drawers seemed to sit neatly to the left of the wardrobe door upright; but more careful offering up, checked with spirit level and eye told a different story; everything vexingly out of kilter. I summoned Lin to help. She was soon using galling past tense imperatives.
“You should have made up the whole chest of drawers framework freestanding, and then fitted it in”
“Yes well I didn't”
“As I suggested in the first place”
“No you didn’t”
“Yes I …”
Even as we argued the framework started to collapse.
“I hate the ruddy thing. I’d like to start from scratch”
“No need. I’ll do it”
“Then you’ll see how difficult it is”
“It’s very simple if you just follow instructions”
“Hrmmf”
I gave up, tidied the tools and vacuumed sawdust. Reculer pour mieux sauter.
“Tomorrow we need to get ready for having people to supper. It’s tidy-up day.”
A week ago Lin and I were at Belissimo’s in Limonia, a small platea off  Nikiforou Theotoki. We’d caught the 1300 bus from Ano Korakiana. €2 each to the city and the bus to ourselves but for one other passenger all the way to town. I’d asked at the information kiosk at the bus station about the new timetable.
“It should be by the weekend. It will be decided which buses will be elim-in-ated”
I walked a little ahead of Lin.
“I’m going this way” she called continuing on Zavitsianou to make a dog-leg into Theotoki while I continued via Vellisariou and Solomou, losing her amid a bustle of visitors from the three cruise liners in port.
I was sat next to the door beneath a shade just before 2.00 asking for a fourth chair. Richard, slightly stooped, entered right, and the waiter seeing him, a regular guest, heading my way, acknowledged our table and me with the minutest of nods. Then Lin followed
“Did you run?”
“No I did not. You dawdled”
Can it be only this year that Lin and I were walking round the rim of Vesuvius, when she fell and cut her mouth and had stitches in the A & E above Torre del Greco and we walked on to catch the train to Herculaneum; mum already dead two months and Richard P back from near fatal illness? It was warm then, blue and sunny enough for ice cream. And in mid-May was it that we – Lin, I and Chris - met with Richard at Harry’s in Perithia, discretely shaken at how he’d altered?
“Tell me” asked Richard, who’d filled the minutes before Chris’ arrival with an account of the final revisions of his latest book “the difference between hip-hop and rap”
Chris, who would know exactly, diffidently obliged. We were reflecting on the term hip-hop in Roger Cohen’s op-ed in the NY Times - 'Why Greece Is Not Weimar' - which called Pavlos Fyssas ‘a leftist hip-hop singer’.
“The eggvolk killed Fyssas for what he sang – rap – not for how he danced – hip-hop”
“But I’m unsure” said Richard “that he was their original target...Fyssas was with friends. There was an argument in a place, a bar in Keratsini, with one Golden Dawn member. He called up followers on his phone. A score arrived and in the ensuing attack Fyssas was stabbed”
We ordered village sausages, roast chicken, chips, and, for Richard, tomato and taramasalata and lettuce and we shared a Greek salad; the feta one thick square on top. I passed the bowl to Lin to break the cheese and dress with oil.
“There’s no salt or vinegar on that so add it to your plate” said Lin. Bread came crusty and soft.
“Narrative, Richard! I just saw a film called The Assassination of Jesse James by the Coward Robert Ford. When I watched black and white cowboy films they were all black and white. Then we had the guilt films”
“Little Big Man”
“Dancing with Wolves much later, and lots more. Then we started to get films where there was always a chronicler, a journalist sending stories of the Wild West back East, making it up as he went along. Unforgiven? W.W.Beauchamp? George Hearst in the Deadwood series. This last film with Brad Pitt as Jesse James was all about making the myth with the events depicted being staged and debated by some of the participants and their audiences in Manhattan. Deconstruction used to be a complicated idea teased and dismissed as academic la-la, now it’s in the multiscreen franchise movie houses….These days you don’t even need an idiots’ guide. For all Richard Dawkins’ contempt, it’s become common sense. Even boring.”

I was getting at Richard P’s writing; not his newspaper articles about Greece but his books, the one I’m tackling on Brian Friel. This latest one will be a difficult I’m sure – about colonialism, but that’s like saying a novel written in Russia is “about Russia”.
Later Chris, as he’d offered, drove us back to Ano Korakiana, else we’d have taken the Sidari bus and walked from the junction 2 kilometres up to Democracy Street. Later he wrote:


‘R was much better, wasn’t he?...what a lovely wife you have. I don’t mind saying it knowing you will let Lin know because she is hard headed and the right kind of cynical and quiet…sceptical might be the better word…I had something else to say but it’s gone.’ He added advice ‘no more capping…I have decided to try not to cap others' stories. do you realise how much of our chat is capping? I am the worst offender and I notice my frustration. My father never capped. It is a pleasure being able to focus and keep track of the speaker. They are grateful and in my case surprised. I love the discipline. What a bore I have been all these years. It’s insecurity but wrong because with silence and attention comes power and quiet satisfaction.

Dr. Johnson suggested, or was it Boswell himself made the remark? “We cannot tell the precise moment when friendship is formed. As in filling a vessel drop by drop, there is at last a drop which makes it run over; so in a series of kindnesses there is at last one which makes the heart run over...” So there is a moment in conversation when something hitherto absent is unaccountably yet undoubtedly present; like an original idea; initially invisible since without reference or context. 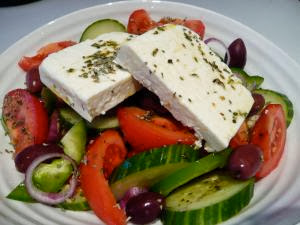