I've never hesitated getting lessons on things - scything, new legislation, cycle maintenance, cooking, using information technology. Over the last twenty years there have been so many free lessons available on how to get the best from new computer software, notably in social media. Regularly in Birmingham people get together as students and tutors to help each other understand the potential of citizen-journalism, film-making, blogging, podcasting, flickr, web-design, messaging, publicising, communicating, lobbying through such things as facebook, youtube and twitter. More recently Government has supported the idea of social media surgeries but the idea has been around far longer. One of its pioneers in the UK has been Nick Booth who surmised over a decade ago that broadcasting was withering, becoming more and more commodified, market driven. 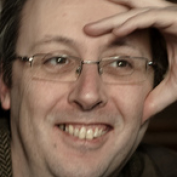 He wanted to do journalism, had done a great local programme with me on the fight for the Victoria Jubilee Allotments on BBC West Midlands (as had Miles Blackley for BBC Community Programmes in 1999), but was seeing a new breed of small mammals evolving under the feet of increasingly ponderous broad-casting. In its simplest form broadcasting struggled to reach small audiences, the myriad small groups that make up that chimerical thing 'community', where 'two or three people are gathered together', where 'one's a nut but two's a movement'. Where a broadcast needs audiences in hundreds of thousands and preferably millions, narrow-casting can work with audiences of tens and twenties, and hundreds and as in the case of our campaign for Black Patch Park be taken up by broadcasters, here mentioned in a podcast by Nick in 2007. The conversation would bore the pants off anyone not directly involved in wanting to save this specific park. Broadcasting would cut it to thirty seconds. As it is an overview of a typically 'wicked' problem of local government becomes available for a small number of local activists. Nick switched - a risky career move; left the BBC and started his own grassroots organisation. I knew Nick through making 'Losing the Plot'. My allotment is very close to where's he's standing in the last seconds of this film - one I've streamed on Vimeo. I used him to run sessions at the university for local government managers and members telling them more about what was going amid the interstices of the more familiar information technologies used in larger institutions. Here he is, the initiator of Podnosh, chatting about what's involved running Social Media Surgeries. 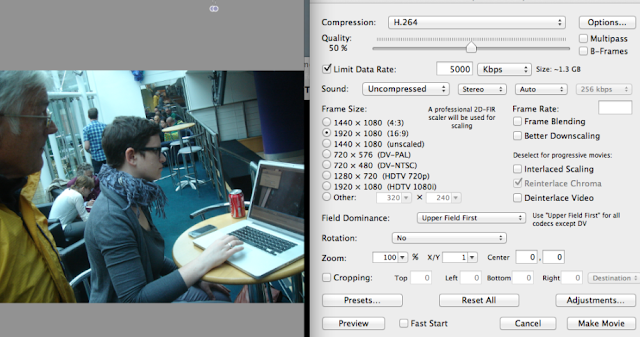 Yesterday at a Social Media event at the Studio in Cannon Street I had another film-making lesson with Franziska Bährle. I convinced Franzi after a few vexed minutes that for my purposes Final Cut Pro was fiddly and tiresome compared to iMovie, but iMovie despite carrying the tag HD seemed fixed in 4:3 format instead of the 16:9 picture ratio that's now the norm. Franzi fiddled with 'preferences' but there was no relevant option there. She closed the application and reopened it in readiness 'to create project' and there where I'd never found it (why should I?) was a small box 'video format' on which I chose HDV1080i. Franzi found this, as she does regularly when tutoring, by accessing help forums on her smart phone.  We loaded a test clip I had on file but the image was stretched. "So near. So far". More fiddling. More help forum advice.
"When you get home reload the film from your camera"
She e-mailed me later:


Ok, try this, I think iMovie HD got some problems with the DV format: Take the clip we tried it with (Franzitest), put it into Mpeg Streamclip and convert it again to a quicktime-movie, H.264, but be sure to tick 1920 x 1080 (16:9). Then try it again with this clip that you get and put it in iMovie HD, setting it up like we did (new project and the little button below, ticking 16:9 or widescreen or whatever they show HD/16:9-wise there, can't remember the details). I hope this works. Let me know!

We also discussed how I could get my 30-50 minute research films of members and officers in conversation down to a manageable number of gigabytes - what will go on a DVD and stream on the web - without loss of quality. We fiddled about with compression variables and eventually came up with an arrangement that would reduce nearly 13 gigabytes to 1.5.
"Try that" said Franzi


Dear Franzi. I’ve re-edited the film in iMovie as none of the changes we made on Final Cut Pro seem to have saved. My re-edit on the iMovie you showed me how to adapt to 16:9 took me just thirty minutes. After that I transferred the edited film DV full quality to my desktop which took about 10 minutes. That gave me a file of 12.5gb which I put into MPEG Streamclip. That produced a final file of 1.50gb - with no appreciable loss of quality or distortion. I’ve burned this onto a DVD to mail to my client.
I chose H.264. Limited data rate to 5000, ticked 1920 x 1080 (16:9) and un-ticked interlaced scaling and stayed with 50% quality on the slide bar.
I'm just delighted and feel so much more confident about making local films - much shorter than this - as well as the longer films that are part of my work at the University.
Thank you so so much, Franzi, and please forgive me getting so fractious about Final Cut Pro, but it really is hopeless for me compared to iMovie - now you’ve shown me how I can get iMovieHD 6.0.3 (267.2) to handle 16:9 and how to get such excellent compression with such little loss of quality.
12.5gig to 1.5gig! Amazing. Up to now these 30-45 minute files have been so unmanageable. Hugs. Best wishes. Simon

When waxing on about social-meeja I'm well aware of the percentage of people across the world and in this country who have no access to the web; don't even have phones. Long ago - in the 1980s - Tom Stonier at prescient talks on campus was anticipating that if you don't exploit information technology, it will exploit you. I'm thinking of that village seminar in Newstead in November 2009 tho'...


Meanwhile in the small town of Newstead, in Victoria, I was taken to a community meeting in the main street coffee shop where there was a Sunday afternoon get together to discuss the implications of Social Networking with an invited academic, Barry Golding from Ballarat University, gently expressing his reservations about the difference between real face-to-face contact and that offered by, for instance Facebook or Twitter, and remindiing us just what en enormous part of the global population has never made a phone call let alone having access to the world wide web, while someone working for the State of Victoria, Ben Hart, suggested - with equal politeness - the potential of the medium. We had WiFi where we met and after the Q & A session I couldn't resist asking to have myself pictured 'in country' by a page of Democracy Street blog.

**** ****
I was collating some studio photos of Jack for Charles who wants them to accompany his marketing of the newly surfaced original episodes of Out of Towm and I came across loads of other pics going back years. There was one of Linda in December 1989
"It actually makes me look half decent" she said this evening... 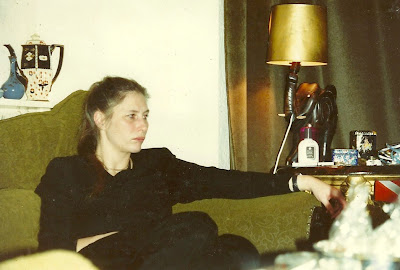 ...and another, record of a memorable day - the first time she came to Greece with me, so the first time to climb the sacred rock where I first strolled one rainy April day in 1957.
*** ***
I was asked to write a short bio for a sailing club I've belonged to for years, one that encourages long diatance voyages in small boats. I had a go, adding, as requested some favourite quotes:


I don't deserve to be in the xxx, but pride in membership and reading the journal keeps me renewing my small subscription. I spent wonderful years between '61 and '66 sailing - first crossing was in a 17' gaff cutter from Pennington to Yarmouth. Next I sailed as crew in Danica, designed by Denys Rayner RCC, to Cherbourg from Lymington. Next skippered by a friend, Chris Jameson, I sailed Danica from Lymington to Athens. I was given my own 2.5 ton Hillyard - Two Pearls - for my 21st birthday. I sailed her from Lymington to Brittany between St Malo and Roscoff; my first cruise as an RCC cadet. Next year I helped make a TV programme about a new GRP boat called the Westerly 22, designed again by Denys Rayner. My stepfather Jack Hargreaves was fascinated by the idea of a boat that could be trailed, was inexpensive yet could cross oceans. With a friend we sailed Young Tiger across Biscay landfalling at Cape Ortegal, exploring the Ria's of Galiicia. In 1965 I sailed Young Tiger to Bordeaux helped by a Hasler self-steering gear. He'd encouraged me to go further as had Denys. After my stepfather and his wife had taken my boat via canal to Sète  making a TV documentary, I was joined by Sue Pulford. We sailed on to Gran Canaria and from there to Barbados - 29 days' crossing. We sailed via the islands up to Miami, where I gave up sailing my own boat for 41 years, and lived inland, working in Birmingham, a tourist in my own country. In 2006 my daughter Amy on her laptop at our kitchen table in Handsworth found a yacht on eBay advertised on a free mooring in Corfu. I looked at Linda who'd survived one windy wet summer with me in a borrowed W22 down the Bristol Channel. She nodded. I clicked on 'buy now'. We have a house in Ano Korakiana and Summersong - an old Snapdragon 27 - for day trips to coves and small islands on the Sea of Kerkyra.

"We are as near to heaven by sea as by land!" On the 9 September 1583 Sir Humphrey Gilbert called out these words from the stern of the frigate Squirrel. He was heard on Golden Hind, as both ships struggled with waves 'short and high, pyramid-wise' off the Azores. Hind's people, amid their own worries, watched for Squirrel as the weather separated them; her lights disappeared...and Thomas More 'He that hathe no grave is covered with the skye: and, the way to heaven out of all places is of like length and distance...'
***
In 1962 I sailed to Greece from England with a friend. In July we left Messina in Sicily. The first morning of our two day crossing, Danica bouncing and swaying on a swift etesian reach; came on our reverse, a sleek Greek frigate cutting smoothly through the cresting waves, heading west. In return to our salute she dipped her flag to us. My chest swells at the memory of seeing that lovely ensign falling and rising again in the seconds of her passing as though official Greece was saying "yasus" - just to us. Next morning we made Byron's landfall.

I value Gilbert's eloquence in the storm but I know too that this was a man who for England left places in Ireland 'the abode of wolves', Thomas More could be cruel and venomous against herecy. Of my ancient experience crossing the Ionian Sea, it's a blue-white picture outside time in the ceaseless kaleidoscope of my mind's eye.
*** ***
Citizen-journalist Craig Wherlock in Thessaloniki writes in his blog Teacherdude's Grill and BBQ on taking pictures in riots...'With clashes in Spain and especially in Madrid growing in intensity I thought I'd post a few pointers to those photographers who want to cover riots and other such turbulent events. Since 2005 I have recorded, dozens of violent confrontations here in Greece and I hope that these pointers will help keep you safe as well....'