Mark stirred the wide tub of rain and isobars between Ukraine, Ireland and North Africa with his mouse so that over several days a revolving pattern emerged into which he could zoom, focusing on the Adriatic, then the coasts of Corfu and the mainland... 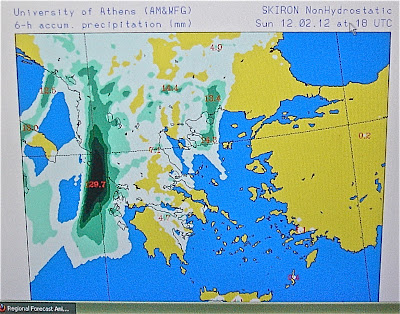 ...to see the weather forecast for the sea of Kerkyra.
“It’ll be rain on Friday. Look here”
A screen-full of arrows in lines across the area
“Some 9 winds from the east.”
I was again enjoying Bianco at Mark’s and Sally’s, with tasty spinach, and a green salad beautifully dressed. Mark and his brother Paul are coming down to Ipsos on Sunday to have a look at Summersong – see what, if anything, might be done about replacing her engine.
"It’s always going to be too expensive" Mark warned me, but the alternative, I said, is to leave her unused. I told Mark and Sally about my meal at Rouvas in town with Jim and Maria. Among her books including a novel, Maria’s penned a diatribe against the greed fuelled mess of place-prostitution (some call it mass tourism) Πωλείται ~ Το πούλημα της Πανωραίας, The Pimping of Panorea. Last year Jim published The Ionian Islands and Epirus, του Ιονίου και η Ήπειρος: Τοπία της φαντασίας, a copy I took with me for a signature. 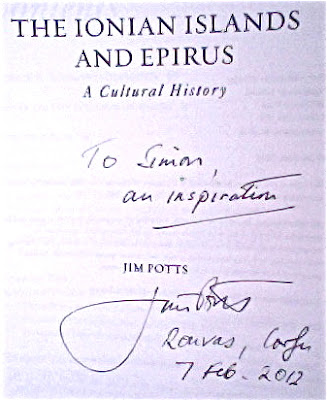 I was looking forward to Rouvas, cosy from the drizzle on a side street off G.Theotoki, just before San Rocco Square. Friends had told me this taverna was a favourite place for lunch. Not expensive, though most things are dearer here than in England. 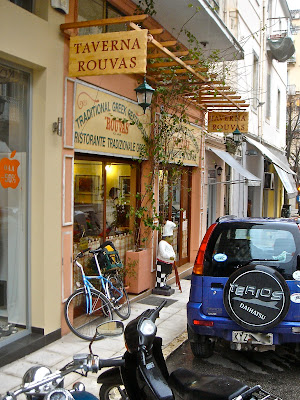 I’d prepared two ‘exam’ questions, which we plunged into after the arrival of crusty bread and wine.


1. Is the architectural, environmental and spiritual desecration of Corfu offset by the alleviation of the material and mental poverty of its population?

2. What cultural objects could you present – texts, sculpture, music – as evidence of the continuity of classical and modern Greece.

“For the second one” said Jim “see Constantine Trypanis’ Penguin Book of Greek Verse.”
“Thanks for this.”
We were both aware that there have been a number of 19th century early 20th century European historical theorists – Fallmerayer foremost - who employed ideas about art, language, Balkan and central Asian migration over two millennia to spread a myth of discontinuity. I find it unconvincing; discreditable too, for its use of racial stereotyping though that was a great preoccupation of the times. Bernal’s African Genesis developed similar arguments in reverse. It’s not always the data that’s wrong, it’s the patterns these theorists made from it.
Jim says more on Corfu Blues, mentioning the 'objects' I asked for in Q.2 of my exam:


1. Of course Trypanis' anthology has omissions (no Ritsos, for example), and it stops with Elytis, but it is still invaluable for the inclusion of so many Greek poems from different periods, beginning with Homer. It prints all the original Greek texts and provides a helpful literal translation in English at the bottom of each page. 'Poetry written in Greek constitutes the longest uninterrupted tradition in the Western world' Trypanis' intro.

2. Another object I would choose to answer the question, at least in part, would be a threshing-floor (aloni, τ' αλώνι), both as an objective, physical structure and space, but also as a potent literary, cultural and folkloric symbol throughout Greek history, literature and folk-song, from ancient times, until the present day. It's sad to see many threshing floors abandoned nowadays, their surrounding walls crumbling, their beauty and function almost forgotten. As people start to go back to the land, maybe some, at least, will be restored. Will the circle be unbroken?

3. My third object would have been a bottle of retsina, resinated wine, but I couldn't remember exactly where I'd read (was it in Homer?) that the Ancient Greeks used to seal their wine-jugs with tree-resin, or used the resin as a preservative.

We agreed that question one depended what you meant by 'desecration', and by 'poverty'. No-one railing against the concreting of Corfu should be unaware of the historical record of poverty and injustice on the island. Lawrence Durrell gave passing reference to the fate of peasants - especially girls, and I mean 'girls' rather than 'women' - when they married. He did not celebrate picturesque poverty, but had another artistic agenda. He was not political until forced by war. Gerald, who eventually and admirably was, who cared for and learned so much about the flora and fauna of Corfu as a child – enchantingly described – reserves for most humans the role of serpent in Eden.
Maria, of an old Corfiot family, speaks of her own land and fellow citizens, angered at the way they so abandoned themselves to the gold rush, like a farmer who overworks his fields, draining them of nutrients, making them sterile, facing just retribution.
It need not have been like that. It wasn’t poverty versus ill-gotten gains. They could, with more love and attention and respect, have been well-gotten. We spoke of how the Scandinavian countries through good governance had remedied the deep poverty of their people in the early part of the 20th century; how they had planned the terms on which they would adapt to the tectonic changes of modernism and mechanization. But we also recognized all was no longer cosy in the Scandinavian welfare system. People yearn for a personal right to dispose of the income they pay in taxes for collective goods like health, education and care of children and the old. The juxtaposition in question one was worn out. There was another question to be framed, about how you manage social transition.
Jim was worried about me cycling home to Ano Korakiana in the rain. He offered to put my bicycle in his car.
“I’m so grateful, Jim, but I like cycling in the rain, really.”
I went to the British Cemetery. Lifted my bicycle over the two steps through the little gate. George Psailas came out with the bell. 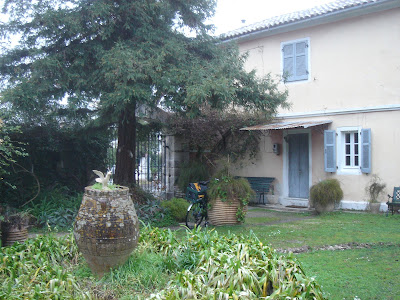 I said I was fine and he went indoors. I had the place as I usually do, to myself, wet underfoot, green, quiet - within a 150 yards of the city centre. I saw the new dug grave of Chris Holmes’ mother, just laid beside her husband, who’d died in 1981- his epitaph, being in polytonic Greek, for which I'll need help translating.

Then back via George Gkavardinas', Γ. Γκαβαρδινας, Cycle shop on Ioulias Andreadi near the old hospital, for me as pleasing as toyshop to a child. Had he toe clips? Yes, tho’ most now use pedal clips.
“I don’t trust them. I forget about them and fall off at the lights” I said.
Could he fit the toe clips for me? 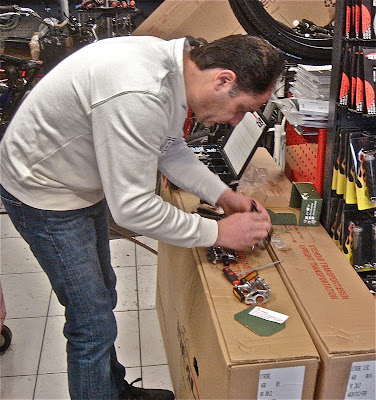 As he did this fiddly job a man wandered in between the rows of displayed bicycles with a small girl holding his hand and clearly without holding out his hand or wheedling sought alms. George said something politely and was answered in kind and the man and the girl went back to the street. I don’t know who of all of three and a half of us was more discomfited. I left delighted with my toe clips... 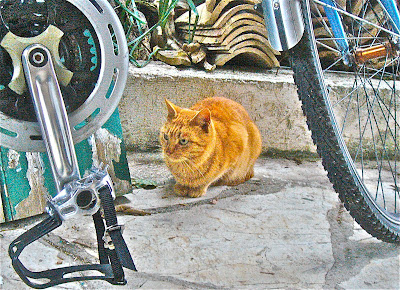 ...to cycle 22 kilometres back up to Ano Korakiana. Earlier while at Netoikos where I do email the owner had remarked on my bicycle and I’d been singing its praises. I have used the word ‘divorce’ and ‘loveless’ marriage describing the ending of my feeling for cars. With bicycles it’s a lively love affair. I explained this because I think he, like Jim, felt slightly sorry for me as though I was forced to cycle in rain and cold. Going up the hill from Ipsos to Ag.Markos is hard work but I marked my ascent by two separate kandylakia where I’d rest for a while to recover my breath and strength. He told me of a recent incident near Lefkimmi where a cyclist had died, falling off and striking his head on a roadside shrine.
"It was concrete," he said "many of them are."
"That would have raised a chuckle on Olympus"
At Doctor’s Bridge, the turn to Sidari and Ano K, off the Paleo road, I rested and had a pleasant smoke. Mark drove by and waved. Later he said
“I should have stopped. You might have had a puncture.”
“I’d expect nothing else, but honestly I have no right to take lifts in cars after choosing to cycle. I’d have sat in the rain and mended the puncture or walked the last 5 kilometres.”
Where I stopped was a pair of rusty padlocked gates surrounded by litter; an unused lane disappearing into scrub. I asked about it 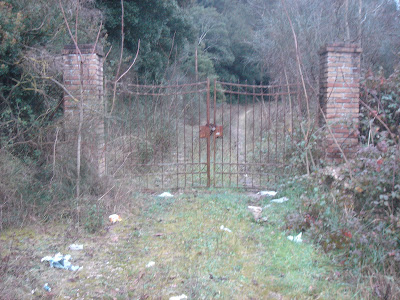 “That’s where someone murdered a relative. It’s supposed to be haunted”
“Na” I said “I’ll spend a night there” – no I won't.
Coming into the village I saw Thanassis, now Vice-Chair of the Agricultural Syndicate standing at the door of the building.
“Could I see the factory?”
He introduced me to Sevastianos Metallinos - Σεβαστιανός Μεταλληνός, the Chairman - Ο Πρόεδρος του ΑΣΑΚ, who showed me round the equipment, explaining the process from the arrival of the olives, their filtering and washing, separation of oil from solids by crushing and slow and faster centrifuges, and the by-products in mush – to create olive spread – and skins and twigs which they sell as compost, cattle feed and soon as domestic fuel when it’s pressed into cakes. 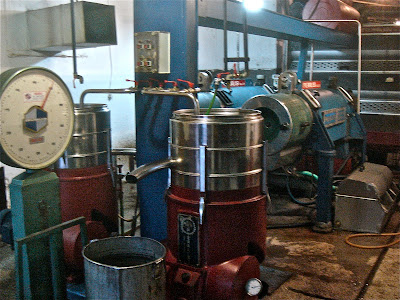 He showed me around the space where the original mechanized olive presses, four great stones turned by belts driven by a petrol engine, had been installed before the first world war – the first in Greece. He made me a skirto as I asked questions. He explained the forthcoming impact of the November 2011 judgement by the highest court in France that the EU ban on GM crops is illegal. This judgement could force all but the most well-prepared food growers into buying GM seeds. There would be a meeting about this in the village - in particular about the setting up of a local seedbank and the conditions for the exchange of seeds - at the weekend in the Co-op building at 4.00pm on Saturday 11 February 2012. 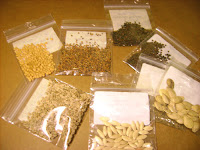 I realised, I said, that I was behind the news on this, that I though GM had been largely rejected in Europe "Not so".

Creatures of a day! What is a man?
What is he not?
A dream of a shadow
Is our mortal being.
But when there comes to men
A gleam of splendour given of heaven,
Then brilliant is the light that rests on them
And sweet their life.*

Πίνδαρος, Pindaros 522–443 BC
*The lines carved on the stone begin 'A dream...' Thanks to inspired Pindar, and to dear Chris Holmes and my friend Aleko Damaskinos for letting me know this poem - in two languages.
***
Corfu Blues is using links to maintain a commentary στήν μεγάλη κρίση...
Posted by sibadd