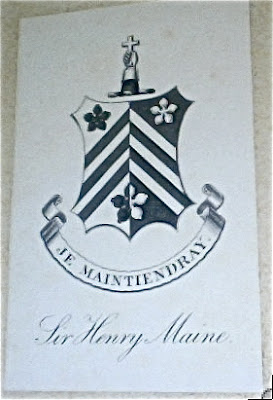 George Feaver, Canadian political scientist, born May 12, 1937 in Hamilton, Ontario, died on 12 May 2008 on his 71st birthday in Vancouver, British Columbia. In 1969 he published From Status to Contract: A Biography of Sir Henry Maine 1822-1888, London:Longmans.
I read Feaver's biography of my great great grandfather - far too cursorily - at the time it came out. It wasn't even my own book but a complimentary copy sent by George to my mother, Barbara or Theodora (to use Minoti's preferred name for her) after Grandpa Henry, Sir Henry's grandson, who'd died a year before publication, in 1968 had shared his sparse collection of Sir Henry's material with George.
I was aware Sir Henry James Sumner Maine was quite a well known ancestor, but his reputation and work passed me by. I got glimpses of others' opinions of his unique contribution to understanding the origins of law and the ancient traditions that underlay the government of rural communities - superlative but elusive opinions.
At home we've an oil painting of his wife Jane, who on lived many years as his widow after his death in Cannes. In her childhood my mum knew Grannie Maine. I recall my tutor at Trinity Hall, Graham Storey, of which Maine was Master from 1877 until his death, apologising after the College had decided to remove a heavily varnished oil portrait from its dining room wall.
"It's not a good painting. In fact it's awful" he said.
I agreed, entirely unaffected. I recall reading later, in Feaver's biography, that Maine was an impatient sitter, not much interested in being portrayed.

It's only in the last year that my interest in Maine has quickened, not so much in his distinctions, his title and a plaque (see p.31 in link) in Westminster Abbey, which I never saw all the years I was at Westminster School, but in his writing and ideas and their significance during his life, and after his death. Again it was the interest and knowledge of others that spurred my present interest - especially their interest in the governance of village communities and the origins of law.
Having already begun to make adjustments to Maine's Wikipedia article - almost entirely lifted from the 1911 Encyclopaedia Britannica - I was scanning the internet and came upon a publication by the young political scientist Karuna Mantena. She had just published Alibis of Empire: Henry Maine and the Ends of Liberal Imperialism (Princeton, 2010). I found her address on the faculty list at Yale, also on Facebook, and wrote to her. She replied almost by return:


Dear Simon Baddeley. Thank for very much for your kind and encouraging note. What a humbling and extraordinary thing to feel connected to Maine in this way! Please allow me to send you and/or your family a copy of the book. It has also appeared in a South Asia edition, which I can send since you may already have the UK/USA edition. If ever I can make a visit to Birmingham, I will be sure to be in touch. all my best, Karuna. Karuna Mantena, Assistant Professor of Political Science, Yale University

I replied with thanks and enthusiasm, hoping I'd said nothing tactless. I'd bought a copy of her book and was reading it. She wrote again:


Dear Simon. It would be my pleasure to send a signed book for your mother. I do hope we can meet one day soon. And certainly if I make it up to the Highlands, I would so delighted to meet your mother. Yes, the book tracks a change from a more liberal-utilitarian moment of imperial civilizers to one more interested in cultural protection and integrity. Maine was at the cusp of that change, and incredible intelligent and perceptive in the debate (others in his camp were more strategically oriented). Indeed, he has had a long reputation in Indian as a friend and defender of Indian village communities. Gandhi was a great admirer of Maine's on this account. And since then a whole host of Indian legal historians have found Maine's work on the impact of English law in India to be especially illuminating. It is wonderful to hear from you, so there is nothing to apologize for. all my best, Karuna

Last September, I got another email - while we were in Corfu:


Dear Mr. Baddeley. A friend of mine, at the University of Hertfordshire  just successfully discovered your exchange with Karuna Mantena who had sent me her dissertation on Sir Henry Sumner Maine since I have written about him in my book on Common Lands and Customary Law: Institutional Change in North India Over the Past Two Centuries published by Oxford University Press, 1996. I knew George Feaver very well who as you know wrote Sir Henry's biography  ... and felt the lack of some of the known sources known to exist in the family's archives to which I had 'lost the trail' so to say. You cannot imagine my excitement, or perhaps you can for I have been living with the research on his papers since 1978. Is it possible for me to meet you sometime as I am in England right now and will be making a presentation at Hallam University on the 17th of this month? Best wishes and look forward to hearing from you. Prof. Minoti Chakravarty-Kaul

And so the view halloo. Since last September Minoti (one of her reviews) has visited my mother in Scotland - twice.

Her first visit was last September. George Feaver's book sits on the table in front of Minto and Mum. The second visit was earlier this month when I was staying at Brin Croft and Minoti stayed two nights with us there and talked to us both about Sir Henry. Before she left she wondered if I could approach the late George Feaver's family and possibly his university to see if by chance George's estate had any Maine material that might be shared. I quickly found and posted to a Facebook site commemorating Feaver asking if anyone could help and was almost immediately referred to his niece, Robin Peterson, who replied equally quickly to my email, saying she did have things of her uncle's that might interest me. She and her family live in Aldergrove, on the edge of Vancouver, under an hour from the Pacific, and a lot less from the US border hardly 10 miles to the south; about 4700 miles from Birmingham:


Hi Simon. I just received you message and would love to help. I have approx forty boxes to search thru. I know my Uncle had been collecting these books for years. I had tried to donate them to UBC, the University where he taught, but suffice to say they where more interested in me categorising the lot, than receiving it. I know these are quite valuable and want them to go to a good home, where they will be given their due respect. If you know of anyone who is a collector and interested in these, please let me know. Some are in disrepair and need a loving restoration, others are in good  to excellent condition for being over 130 years old.

There may be more. I still have to go thru the boxes. I will try to find the information you wanted,  i.e. Uncle George's working papers, etc. Please let me know if there is anything else you are looking for, and by all means, please  forward this information to Dr.Minoti Chakravarti-Kaul. Cheers, Robin

Last Friday we had a conversation on Skype - about 7.00am in the morning for me and around midnight for Robin and her family.

In the course of this conversation Robin told me that after his death George Feaver's home was cleared of most of his possession by his family - a perfectly normal process - but that forty boxes of papers, including the books listed above, had been left for disposal by auction. A friend of Robin's daughter (I think) who worked at the auctioneers sent a message to Robin about the sale. She dropped everything and dashed down to the auction, and rescued the boxes - selling at C$1 each - and has them stored in her garage. As we chatted - for over an hour - she showed me George's original bound dissertation on which his book on my great great grandfather had been based with illustrations not in the book, as well as first edition copies of Maine's books that had been in her uncles' library. On 25 June I got this email:


Hi Simon. The books are safely on their way to you Mum's place in Scotland! Darrell took them down to the Fed Ex office in Langley this afternoon. They were picked up for sorting and VIA (Vancouver International Airport), by 3:00PM PST. The tracking number is  **** **** ****, which you can track on the Fed Ex website. The clerk wrapped them with bubble wrap and commented - 'these look old'.  LOL. I feel so much better that they are going home...They should arrive in Inverness no later than July 1st., so your Mum can have a peak thru them before you get there.... I think you'll have fun looking thru these. I just wanted to tell you how much I enjoyed our conversation last night. I'll have to at least  get dressed for the next, lol.  Maybe a little more heads up before the camera starts rolling. Looking as glamorous as Olive from On the Buses takes time. Robin, Darrell, and Family

*** *** ***
Yesterday afternoon I tried out my new azada on the plot and was delighted at its superiority over the fork and grubbing mattock when it came to clearing more of the untouched weed-riven soil, and I was joined by two spectators - Robin who I know and someone I often see on Victoria Jubilee Allotments - his name Tsitsan - but that's only the sound. I don't know the spelling.  He was curious about my azada and offered to have a go with it.  Verdict? I wish I'd discovered the azada when I started getting the plot ready for planting.


Who breaketh up, timely, his fallow or ley,
sets forward his husbandry many a way ~ Thomas Tusser 1524-80

The azada is a gem of a digging tool. Thanks to those gardeners who recommended I get one, and thanks to Simon at the web mail-order firm Getdigging for sending it so swiftly, and thanks to my friend Robin for another good argument  - about scientific creativity and strimmers.


Earlier I had taken my scythe over again and had a go at cutting the grass strips on either side of Scylla Parkyn's plot. She our Hon.Sec. I found that I could not cut the narrow strips as close as with the strimmer that making such a noise a few plots away. I reminded myself  I need to get better at sharpening my blade and choosing a time when the grass is wetter. All the same Scylla will now be able to use the allotment association's handmower on much shorter grass. I'll hone my scything skills.

Back to the future - a flattering email on 19 July from Simon at getdigging:


Hello Simon. Just a quick note to say I saw your piece on Youtube with your “new Azada” – I didn’t realise it was there until a customer said she had seen it. You look as though you were born with an Azada in your hand - and apparently not even out of breath when, after giving short shrift to a goodly area of sod, you casually strode off with the bell cap for a sip of water; very impressive! Almost as impressive was the deep philosophical discussion which you managed to have with your neighbour at the same time!  Anyway, many thanks for the kind mention; it’s always nice to have a helping hand – being a small one-man band my advertising budget of £5.00/year doesn’t stretch very far so every bit of publicity is always appreciated. All the best, Simon