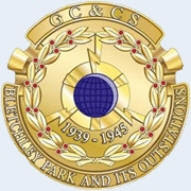 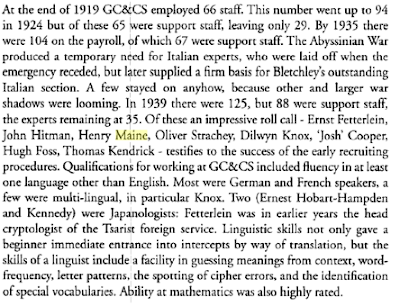 I learned Grandpa Henry - Henry Maine - did hush-hush work when I was about ten; imparted to my curiosity by mum (photo: with him at the seaside in 1919 - the year of the founding of the Government Code and Cypher School) with a caution about reticence that made me responsible. I've been reflexively incurious since, but finding a small photo of him amid ruins I posted a query about him on a Combined Ops noticeboard and heard no more for six years. 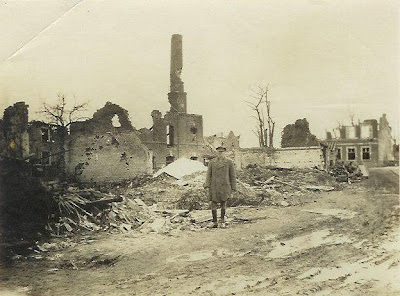 Henry Maine, my grandfather, in France - circa 1916
An email from Paul Savage a month or so ago. "I was at a dead end on my grandfather's history. We'd got the notice of his OBE from the London Gazette and after that a blank, but for this letter from H C S Maine, your grandfather, on his retirement" 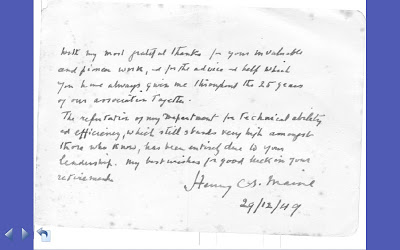 We agreed to meet in Hereford this Wednesday. Paul met me at the station, drove to a multi storey. On the front of his car he laid out a gadget. "This was Henry Heil's." From about 1924 Heil, Mark's maternal grandfather and Henry Maine worked together. "Doing what?" Heil was an electrical engineer who worked in 'the post office' - an institution that while being indeed The Post Office was also at various times in their long association, linked to the Cypher Section in Room 21, Broadway Building, home of the Secret Intelligence Service, followed in WW2 by a period at Bletchley Park - Heil for the duration, Maine returning to Broadway in London. Our grandfathers continued their association until Heil's retirement in 1949. 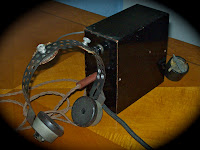 The 'gadget' was an early bug - almost certainly pre-war. Over coffee in the pedestrianised area of Hereford we pondered our grandfathers' collaboration in the inter-war years.


"My grandmother said he was often out of the country" "?" "He went around our embassies. " "Installing things?"

I phoned my mother.


"Did you know the Broadway Building" "Oh yes my father worked there. When I was first driving I used to drop him off there." "How old were you?" "Around 18"

That would have been the mid-30s.


"He was also working at Buckingham Palace then" said my mum, "he had an office there as a Secretary to Queen Mary." "That would explain his MVO, but what about the CMG?" "Well that's what I'm curious about."

E-mail to Paul after I'd phoned and read out, over the phone to my mum, passages from page 19 (p.65 in the journal as a whole) of a 1986 paper: 'The government code and cypher school between the wars', Intelligence and National Security, 1: 1, pp.48-70, by A.G.Denniston, which includes several references to Maine and an endnote 44 that described my grandfather thus: 'H. C. S. Maine, a founder member of GC & CS' - The Government Code and Cypher School:


My mother's been on the phone. She knew Alistair Denniston well. Henry Maine and her were close friends and colleagues. Mum recalls meeting him socially. His son Robin wrote a book about his father that mum has. Mum met Robin almost by mistake in Inverness about twenty years ago. She remembers them chatting away about each other's fathers. She's also recalling other things about her father's friends, and her mothers father, Frederick Kerr and his brother, her uncle Allan Kerr - both associated with the Anglo-Portuguese Telephone Company. Best Simon (re Denniston ~ see also)

*** ***
This Friday afternoon Lin and I and Rachel went to check out the Victoria Jubilee Allotments where we'll be making our choice of plots at midday tomorrow. The plots are quite stony; bits of ceramic and glass and other rubbish in the topsoil but, seen as a whole, the place looks pretty good and the setting is superb. There'll be lots to do clearing ground, composting, making ready...
I'm still in a political gear, dazed by the transition from lobbying, researching, protesting, writing letters, asking questions, making speeches. I was in my late forties when we started campaigning to stop this land being built over. I've got so used to campaigning that it will take time to get used to cultivating land, growing vegetables, digging and riddling soil, composting and weeding. Thank goodness, Rachel and Lin were ahead of me, planning where they'd like plots and what they hoped to grow in them. 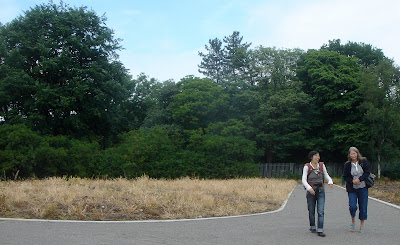 Rachel and Linda on the VJA ~ 11 June 2010
I've been so fortunate to be waging peace, never exposed to the horrors and dangers my parents and grandparents faced in their lives. It is so easy to take this difference between generations for granted, to be unaware of having lived 60 years of peace - to be drawn into absurdly disproportionate complaint.