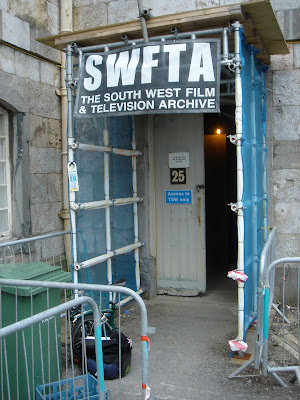 In a large room of the offices and production spaces of the South Western Film and Television Archive (SWFTA) there's a stack of 16mm film in reel boxes and a smaller - in volume - pile of ¼ inch reel-to-reel sound tapes. 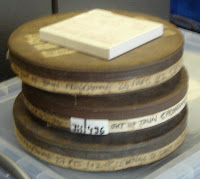 When Southern Television lost its franchise Jack rescued this material and kept it at home for a while. Having mined it to work with the late Steve Wade assembling four commercial VHS videos now DVDs, he handed over tapes and films to film studies expert Nick Wright, who, some years after Jack's death in 1994, having moved to the West Country to a house without suitable storage, transferred them from their original store at Bournemouth University, where he'd worked, and handed over the collection to the care of the Plymouth archive, where it's been since.
John Peters, neighbour and friend of Richard and Wendy Hill, started trying to obtain a copy of the Out of Town episode in which Richard demonstrated his patented 'exploding' bait box, fishing for Black Bream off Littlehampton. Jennie Constable out of kindness dug out the mute film and with help from colleagues was able to find its taped commentary, marry them and send the result to Richard at whose home I saw it just over a week ago. I visited the archive to see the place and meet up with Jenny and her colleagues and get a feel what would be involved in making more films from the collection. 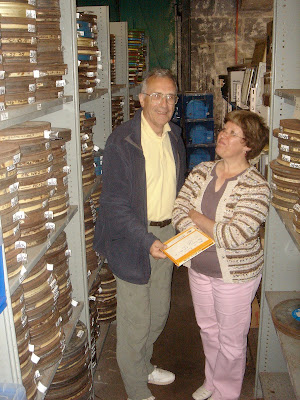 Roger and Jennie show me reels of my stepfather's films
Roger Charlesworth had shown me an example of one of the films being married by Graeme Spink on a Steenbeck editing machine, and a little later, while I was talking with Bob Sharpe and Jennie about Jack's approach to filming (mute film to which a live commentary was added at transmission, with minimal editing), Graham said he'd been fortunate and just found a film and soundtrack that he swiftly matched on his machine so we could watch it in a way that it hadn't been seen since first broadcast in 1974 [To see more about Jack Hargreaves on Democracy Street go to links in the right margin or search the name]
Jack's film at SWFTA from Simon Baddeley on Vimeo.
Posted by sibadd