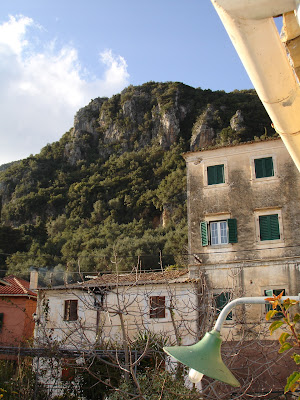 Another chilly blue dry day - perfect for our odd jobs. Aln came up in the late afternoon and fitted our flue. We sat enjoying the fire and the slight scent of the wood smoke drifting back through the rough hole that Lambros is coming up to finish tomorrow along with putting final touches to the roof, putting in a botched window properly, plastering and generally tidying the mess made of our upstairs last year. The weather promises to stay fine over the weekend and beyond.
* * *
E-mail makes arranging future work pleasantly easy - over a soup and bread in the Beer Bucket in Kontokali. I got a circular from the university yesterday on an agreed ‘sustainable cooling policy’. It aims to limit the use of ‘active cooling’ - air-conditioning:

With the expected increase in temperatures due to global warming the need to adapt buildings to prevent overheating and ensure acceptable working conditions will become increasingly important…The University will adopt a cooling strategy based on the ‘switch off, absorb, blow away and cool principles’ with active cooling being a last resort. (i) Switch off: Reduce internal and external heat gains by minimising gains from lighting, IT and heat producing equipment. This includes minimising the need for heat producing equipment, locating such equipment in dedicated areas, and the use of passive techniques such as solar shading. (ii) Absorb: Where practical use the thermal mass of the building to absorb heat and/or by the introduction of phase change materials (SB note: technology for collecting night cooling for use in the day) (iii) Blow away: Ensure an intelligent ventilation strategy. For example the use of night time air to cool buildings, limiting ventilation when external temperatures are greater than internal. (iv) Cool: Where cooling is unavoidable, ensure that the system used is well controlled and is designed to minimise energy use and the production of CO2

* * *
I finished Kevin Andrews' The Flight of Ikaros. I’m grateful for the web friend from Ikaria and the English north country, who is making a study of Andrews, who told me of him. Andrews' writing makes his book universal, but it could be read alongside Nicholas Gage’s Eleni – the latter first, partly for the summarised history inserted to give context to the story of his mother’s murder in the village of Lia in Epirus – by any non-Greek wanting to understand the Greek Civil War. Andrew's only meets communists very briefly, on their way to prison, but spends much time in the company of those who fought against the andartes.

The understanding that is emerging – very slowly as my stolid intelligence reaches for it - is the role, only recently teased out in a number of doctoral theses focusing on small areas of Greece in the period to which Professor Mark Mazower and fellow contributors refer in his sombre and scholarly collection After the war was over, is the way the civil war, so often viewed as the first surrogate hot war spawned by the Cold War, in which ignorant armies clashed under the aegis of greater powers, was also an occasion for escalating the violence of traditional feuding between villages, families and brothers. In Kevin Andrews’ encounters across Greece during that dire period people talked less of differences over the future government of Greece – the preoccupation of the Americans and the British and, to some extent the Russians, though Stalin had graciously agreed with Churchill to cede Greece to the West at Yalta – than about the settlement of scores, revenge and retribution. This is the story of all civil wars including ours - now entertainly re-enacted as a fancy dress picnic on Bank Holidays. Imagine that here. Thucycdides wrote of it with the start of the revolt in Corfu. Its ingredients include envy, jealousy, rage, the availability of weapons and the opportune moment. These fine grain interpretations are bound to be less welcome, even 50 years later, not just because they become so tortuously detailed, but because their currency is made up of villages, streets, families, the names of individuals and the messy subjectivity of personal accounts among people whose scores, even now, remain unsettled. No wonder some say ‘leave it be’.

Andrews, who’s sense of severance at leaving for New York at the end of his fellowship in the early 1950s perhaps surpasses Lawrence Durrell’s (‘The loss of Greece has been an amputation. All Epictetus could not console one against it’ Ch 8 Prospero’s Cell), recalled from the caique nosing past Cape Matapan towards Crete in April 1941, returned (unlike Durrell) to become a citizen of Greece, living there with his family until his end. Nicholas Gage, on the other hand, was born a Greek but, through his mother’s courage, escaped, as a child, to America to return as a man to research and tell her story.

‘History with her painful and unexpected changes cannot be made to pity or remember: that is our function’ Lawrence Durrell op cit 1945

* * *
I had a good dream last night about ordering wet work on the person who set me up over the credit card theft – only joking. Katerina came up from the bus stop yesterday afternoon with more horta for us with names like famous battles – moskalahánu, prikalíthá, zaxhouliá and zágouna. It’s chilly but sunny enough to dry washing and feel warm in the day. Katherina sighed and exclaimed ‘Krio!’ I made gesture of flexed arms ‘Stin Anglia einai zesto!’ She laughed. I might have made some doltish sense despite every tense wrong. God how I wish I could speak this lovely clever language – and a hundred others but that can wait.

Last night I took my new stick for a walk up the village. Lin held my gloved hand in the chill. “Left or right?” she asked at the top of our steps. “Let’s go up the village”. We strolled against the wind funnelled between the houses until we came to the wider slope that leads to the car park and bandstand and the lights of Corfu and the mainland coast twinkled between the dark shapes of swaying cypresses harking the winter breeze. ‘How could you prove to a child those lights, which look just the same, are closer than those stars?’ We strolled over the performance area by the bandstand and traced out the words on the low iron-fenced memorial to those who’d died for their country. Lights shone behind the windows of a substantial overlooking house from which hung the national flag. We walked on to where the road narrowed between small houses, some occupied some clearly not for some time. A heavy dog chained on a terrace barked suddenly and loudly as we passed and went on being noisy out of boredom. We came to the derelict music school. An earth tremor had made a crack that ran from the lintel above its third floor to the street. We started back from the second of the hairpin bends as the road starts to climb to Sokraki and the street lights end. ‘It’s got the same magic as Lydbrook’ - the village where we’ve had a home for over twenty years. On the fringe of the forest between high steep slopes sprinkled at night with lights along its steep unlit footpaths and a night sky almost free of city glow, we’ve walked on similar windy evenings and enjoyed the long village to ourselves as people sit snug indoors. Coming home we passed quietly by the new music school where a piano was being practised and the kafenion where elders were playing cards and backgammon.
Posted by sibadd