Nightmares of the contented 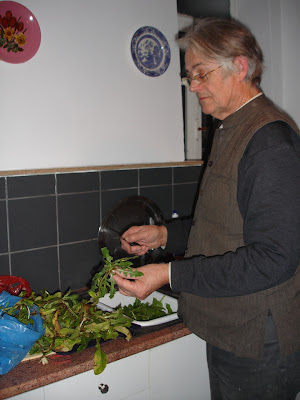 People in Corfu gather edible plants - horta - such as asparagus, dandelion, wild mustard, chicory, and borage, from favourite places. Katherina, with typical generosity, gave us horta - 'wildweed' - from a sack of plants she'd picked. I've had it in restaurants. This was delicious cooked like spinach - almost my favourite vegetable - but I'm half wondering if it makes me dream. Yesterday morning I was in a machine shop in an old building in Derbyshire. My companion, who I didn’t know very well, needed to buy a particular tool. It was the second place we’d visited on a journey to get something done further north. There was a shout. Everyone stopped working. I wondered what was going on. A foreman arrived in worn overalls. "There’s been a credit card stolen. Would all of you mind emptying out your pockets." I immediately pulled out my cards in their plastic container but with them was this red and white card and a piece of paper in a similar design that I didn’t recognise. Immediately someone pointed to it even as I was grasping what had happened, and I was left with a security guard The room emptied. I could think of no way out. Anyone can be a thief. Why not me? The security guard remained impassive, not unwilling to listen to futile protestations of innocence. This is the second dream I’ve had since arriving here, where I’ve woken just before being arrested. The previous one, obviously brought on by the juice of our blood oranges, had involved me cycling on the pavement on a lonely dark road in Birmingham near my university. A patrol car came by and parked at the next junction and, via a speaker in its roof, asked me to approach. I dismounted and tried to hurl my bike over the hedge with the intention of following it and escaping, but the bike fell back messily, compounding my offence and shame. I know these waking nightmares have nothing to do with their subject matter and are only prescient about the possibilities of my character. They are worse than one’s about physical disaster like plane crashes or shipwrecks. They refer to offenses treated as minor in our society – especially the cycling misdeed - but they are only slightly less dreadful than ones where two police, one a woman, come to the door with news. They are about the unreliability of shared opinion – in this morning’s case, of my honesty, which I foolishly take for granted as existing outside me and abruptly doesn’t. Conrad wrote in Almayer’s Folly, his first novel, ‘few men realise that their life, the very essence of their character, their capabilities and their audacities, are only the expression of their belief in the safety of their surroundings’ and ‘the reliability of their police’ (or similar words) adding that their ‘interior is still phantom and heartless.’ (see Internal Polity) My dream was about the bickering that went on between Lin and me as she drove us into town the other day about the whereabouts of our electric bill. "At the electric place where we must pay they won’t know who we are without it. I’m sure I left it with you!" "For god’s sake don’t be such an old woman"says L. "Don’t be sexist" I said grumpily. As it was our tax number, their computer system and a friendly employee at the company found our account in a minute. I don’t think it's about age. I've had such dreams since childhood. I think they occur when one is happy and enjoying peace - unlike so much of the world. To recover my cheer I played Ένα Το Χελιδόνι and Της Δικαιοσύνης Ήλιε Νοητέ from Axion Esti. Lin came down. I had a cup of tea. 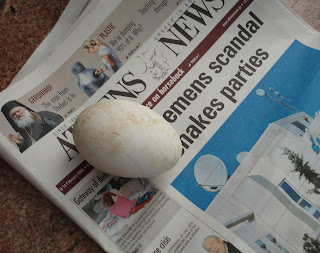 A few days ago our English neighbours, of long residence in Corfu, visited to see our house and to show us the house they are having remade a few doors up Democracy Street. M presented me with gifts – an olive walking stick he’d fashioned and to which there’s a history that made this gift special and two eggs for us from their geese – one of which I’ve enjoyed as an omelette. My step-father would have been so pleased to know that a stick he’d made on television of hazel from an English hedgerow, had been crafted for me from out of olive in Corfu. ‘Where did you get the roe deer’s hoof?’ ‘Off eBay’. This matter of balancing old and new is one that recurs – a way of inventing our future. Wednesday was blue again but with a chill breeze during all but the middle of the day. We’ve 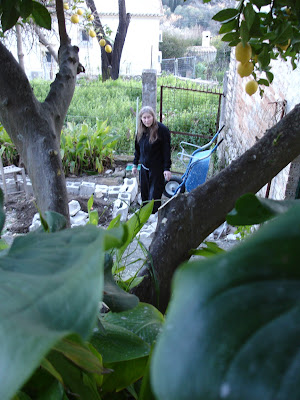 been doing more jobs so we can relax in April. Lin has begun preparing the rest of the garden for a layer of plaka between beds. I’ve barrowed concrete blocks stored under the veranda to her. Most of the apothike tiles are now on our roof, so we cleared the corrugated roof of mortar left by Lambros. We gently pruned the lemon trees. Lin put more plants in the garden and watered it. We’ve done more carpentry on a kitchen shelf and the guest bedroom door which 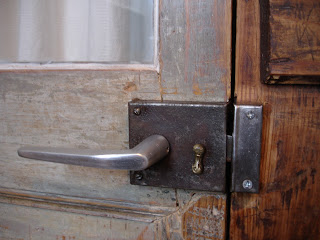 Lin’s still stripping while I de-rusted and oiled the latch, before we reglazed the four panes using silicone instead of putty. From time to time neighbours strolled by, greeting us. We realised we were supposed to have renewed the car hire contract yesterday. When I rang him, Kostas said "Don’t worry. Come in when you can." Tuesday evening, over spaghetti, we watched Theo Angelopoulos’ Landscapes in the mist. A teenage girl, Voula, and her little brother, Alexandros, set out from somewhere in Greece on a journey by rail to find their father somewhere in Germany - a ‘somewhere’ that could be anywhere, as the idea that he’s in Germany is a tale of their mother’s, who we never see, to avoid telling them their father’s unknown – something we hear after a policeman takes them to their uncle in a vast power station after they’ve been put off the express to Germany. This was a Greece of grey skies, snow, wind and rain with people in winter clothes standing around a lot in towns of scruffy empty buildings or monstrous machinery at work in taupe landscapes crossed by trucks on featureless motorways. The children are brave, sadly innocent - distressingly so in the case of the girl - but increasingly ingenious at surviving. Memorable scenes include, policemen and women in the street gazing up at falling snow; a gigantic hand floating up from a muddy sea with a stump of an index finger pointing out of the screen and being carried by a helicopter past the apartments on the Thessaloniki corniche to disappear over the Turkish citadel; a line of clothes shaking macabrely in a stiff breeze like limp bodies – andarte and battalion uniforms and traditional klepht costumes strung up for sale by a penurious theatre troupe no longer able to draw an audience for their touring re-enactment of events between 1900 and 1949.
* * *
The Corfiot is an English language monthly magazine (subscriptions - most of the paper is not on the net) edited by Hilary Whitton-Paipeti. Its contributors are Greek and English and the editorial policy is diplomatically, but entertainingly, opinionated. We enjoy it for its small ads about forthcoming events and for articles on old Corfu, on current challenges facing the island economy - most especially how to develop policies for sustainable tourism. The latest issue – February’s - has heated responses to a letter from someone who’s recently come to live in Corfu, in Temploni, effectively complaining about Greek Corfiots and calling on readers to write to the local authorities and complain about their behaviour. C.M. Woodhouse in The Philhellenes wrote scathingly about a certain kind of Englishman who came to Greece and complained about Greeks – in the 19th century this included grumbling that the natives didn’t pronounce Greek as taught in English public schools. The hapless RS in this January’s letter pages of the Corfiot asks why all Greek civil servants aren't required to speak and write English and why road signs aren't in Greek and English. He complains about the lack of direct flights to Corfu out of season; about shooting small birds on the island, about some Corfiots poisoning stray cats and dogs; about the way these animals are allowed to run free on the island. His solution is regulation, dog licences, neutering, ‘keeping on leads’, criminalisation, and the ‘mobilisation’ of armed forces and the police to collect refuse during the recent strikes and a lot of letters to the local authority. What vexed me and Lin about this letter was amplified in responses to it in the February issue. Dr Lionel Mann, a good old man with a distinguished career, who we’ve had the honour of meeting in Ay.Ioannis, wrote, with uncharacteristic anger that the January letter 'was horrifying in its display of the monumental arrogance and abysmal ignorance that have made English-speaking nations so widely despised and hated.’


‘We do not want foreign “improvements” imposed here, as seen today in its ugliest forms in Afghanistan and Iraq.’ ‘Man has always been a hunter and always will be. I do not particularly like the shooting of little birds either, but these guns are not being used to slaughter indiscriminately innocent Iraqi and Afghan men, women and children, are they?’

There’s rebuttal of each complaint in the January letter. He finishes


‘Consider that for more than two thousand years until the British left in 1864 the Corfiots had always been ruled by occupying powers who made little if any effort to educate the residents. Corfiots have had only a relatively short time in which to learn to govern themselves and are not doing at all badly. Insensitive, ignorant criticism is at best unhelpful, at the worst flagrantly insolent and tarnishes even further the already suspect reputation of British immigrants. Anyway, life here is vastly superior to that in the over-regulated yet greed-driven, crime-stricken, violence-worshipping, drug-sodden, booze-swilling, pollution-plagued, barbaric UK. Accept beautiful tranquil Corfu for what it is – faults and all. I love Corfu.’

There are two more letters in the same vein reproaching Mr S with equal vehemence. I disagree on only one element of Lionel’s letter. My love for Greece is not deepened by any animosity towards England. Perhaps it’s my luck; possibly the result having two families – English and Greek – that allows me to love both lands – a feeling that is not for one moment compromised by awareness of their separate and shared problems. * * * There are about four bus stops along the lower road through Ano Korakiana. One is at the end of the short path that goes down from our house. Lin, who unlike me has been less keen on breaking up with her car, asked me about bus times. She's influenced by the daily cost of car hire - our largest regular expense at €22 a day (the best going rate fr a small saloon we know). On weekdays, a bus leaves that stop four times a day for Corfu Town at 0715, 0900, 1245 and 1630. The same bus leaves Corfu main bus station for the village at 0645, 0830, 1215 and 1600. Last year a single fare was €1.40. 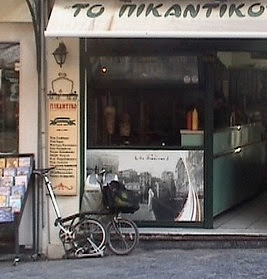