Yiannis Moralis 1975 Originally uploaded by Sibad.
This is the look I recall. It's not my photo. I met him in Aegina in August 1968 with my stepmother, to whom he'd been married. Dad asked me to drive to Aegina, so we'd have a car for the family. I did the journey in four days - my third visit to Greece. I knew Yiannis Moralis'- Γιάννης Μόραλης - reputation. I've seen his portraits of Maria since - one on a card circulated to everyone at her funeral in 2005 at St.Sophia's in Moscow Road, Bayswater, her body laid with my Dad's ashes at Kensal Green Cemetery. Then, long ago, in Aegina, my memory is less of Moralis' work than the focus of his kind curiosity and quietness in the midst of much happy laughter, singing, eating, drinking and boisterous table talk in which, I, a polite political innocent so far as Greece was concerned, heard frequent reference to the name Markezinis. Outside the glow of a taverna, rather than squeeze through the crowd I strolled down the gravel road for a pee. The etesian northerly, which Maria detested and wouldn't call meltemi, was gusting as boisterously as our party, stirring the olives trees into a crackling roar that ebbed and flowed like breaking surf. Standing in the warm dark I was assailed by unfamiliar dread, more intense for the closeness of the bustling taverna. My anxieties are to do with enclosure, so this was odd. Maria said later, and matter-of-factly, that I'd had a bout of panic - sudden fear in a lonely or open place caused by Pan.
* * *
In summer 1968 Georgios Papadopoulos, who'd led the previous year's coup d'état was claiming that if the 'Revolution' - as his Junta called it - stayed more than a certain time in power it would lose its dynamic and become a 'regime'. He was already trying to draw Spyros Markezinis into metapolitefsi - a word that only surfaces 5 years later to describe a return to democracy acceptable to those who'd taken it away and to a small number of old guard politicians - Markezinis being one - who might survive the risk of being close enough to the regime to achieve a recovery of parliamentary rule. On 13 August, as I enjoyed the beach, Alexandros Panagoulis tried to assassinate Papadopoulos as he was being driven to Athens from his summer residence.

My brother's address at Maria's funeral in November 2005:

Maria Baddeley: a tribute
Our mother, Maria Baddeley, was born Maria Roussen to Pericles and Lilly Roussen in Athens on 26th August 1916. Mum was the middle child of five daughters: her sisters being Janina, Emily, Dolly and Nora. Her father, Pericles, was Admiral of the Greek naval fleet. She adored her father who used to tease her affectionately: anticipating a boy, he nick-named her “Mario”. The five siblings, known as the “Roussen sisters” were a glamorous and much sought after part of the Athens social scene during the hectic interwar period. However, this picture of a happy family life was rudely interrupted when Pericles Roussen’s principled monarchist beliefs led to his imprisonment for refusing to jeopardize the Greek fleet. This caused his early death and the circumstances of the family changed dramatically. The young Maria was forced to abandon her education and take up a job working for an Athens power company. Our mother, who was always one of life’s natural bohemians, was greatly attracted to Athens’s literary and artistic community. In her early twenties, she became the model and inspirational subject of portraits by both her first husband, Yiannis Moralis, and other Greek painters including Yiannis Tsarouchis. Yiannis Moralis’s iconic portrait of Maria is now displayed in the National Gallery of Greece. She herself was also inspired to paint at this time and displayed an artistic talent that has been inherited by many of her grandchildren. 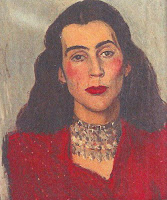 During the German occupation and the ensuing Greek Civil War, along with all Greeks, she experienced great hardship and, in the prevailing chaos, she met and fell in love with John Halkett Baddeley, our father 'Johnnie.' She was introduced to Johnnie, who had been posted to the British Embassy in Athens, and soon after they married. Johnnie was captivated by Maria’s exoticism and beauty and Maria was equally captivated by his charm and English manners. They had a very happy, fruitful and loving marriage. After their marriage and, as the family started to grow, our mother embarked on life as a diplomat’s wife. Their combined charm and shared sense of humour and, especially Mum’s tremendous ability to empathise and make friends with people from all cultures and all walks of life, gave Dad vital support in his work. Together, they were a great gift to the diplomatic community of the time. Through the 1950’s and early 1960’s, our mother and the growing family accompanied our father on postings to Hong Kong, Singapore, Burma and Belgium. Mum had four children, Dorothy, Miranda, Oriana and me and she was a stepmother to Simon and Bay. In the early 1960s, Dad was posted permanently to the Foreign Office in London and the family moved to Sussex where Maria presided over a large house in Crawley where countless friends, relatives and diplomatic colleagues were welcomed, wined and dined in seemingly endless Sunday lunches. Once their children had left the family nest, Dad took up a new post at the British Embassy in Washington DC. Soon afterwards, Mum was left heartbroken as Dad became seriously ill and, several months later, died of cancer. After this terrible shock, Mum moved to Fulham where, while putting her life together again, she developed a passion for Fulham Football Club, now shared by many members of her family. From the mid eighties onwards, Mum divided her time between Greece, Switzerland and England. Despite her somewhat nomadic existence, she still created a home. This ‘home’ included, but went beyond, family and geographical boundaries. It was built from her personality, from her interest in us all, her intellectual curiosity and, most of all, her generous heart. This enabled her to see more of her extensive family, while also playing hostess to her wide circle of friends. In her later life, Mum flourished yet again as a loving and extremely popular grand mother, or rather “Granma.” Apart from all her grandchildren, she also had many great nieces, nephews and other young friends. It came naturally to her to show the same consideration to each one of them and she was loved dearly by all. They would often take turns to attend her renowned late night soirees. As all of us who are here today know, she was also a great friend to so many people who were very special to her: each person had their own unique relationship with her. She never forgot a birthday and she was renowned for her generosity. Mum had the discretion that was to be expected of a diplomat’s wife. She was someone in whom people could confide. They knew that they could speak to her at any time, although preferably after sunset! In recent years, Mum became increasingly frail (in body, not mind!). She had many people who helped and supported her. She made sure that they were all loved and cared for in return, as if they were a part of her own family.

Maria, Mum, Granma, was a devoted wife, a loving mother and aunt, a massively popular grandmother and a loyal friend. She was unique and irreplaceable. Over the years, she often spoke of her dream to be reunited with her beloved husband. Now, at last, they are together again.