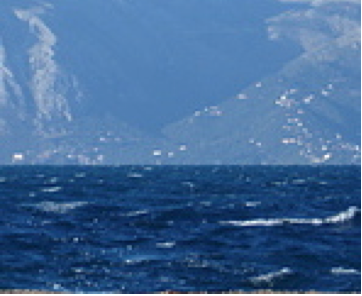 The picture of Barbati on the slopes of Pantokrator, taken by Lin from Corfu Fishing Port last November, has nothing to do with the discussion below. I just wanted a pin-up of the sea.

From: Nikos Dimou (his third letter)

Dear Verena,
Thinking about the Greek version of “the banality of good” I must say that I cannot come up with a standard Greek phrase corresponding to it, not one that I know of anyway. I can attempt to “propose” something equivalent but in that case it would help me a lot to know the context in which the phrase will be used. There are words that could be suitable to create the Greek phrase. The choice depends on context.

There could also be other good ways, involving more than two words, in which to express the concept satisfactorily, but knowledge of the context is necessary, Dimitris

Dear Alex
I need a philosopher. Is there a translation that captures the opposite of Hannah Arendt’s ‘banality of evil’?
Best wishes, Simon

Hello Simon. Finally, after a long and adventurous journey I am in Corfu, where I was greeted by an abnormal high temperature weather and scorching fires. I thought of what you sent me before and I asked a couple of friendly opinions here in Corfu, only to agree that we disagree with “kainotopia tou kalou” because it sounds bit like a prototype, an archetype or revolutionary. I think in the context of the firefighters it sounds better something like “aperantosini tou kalou” “to afilodokso kalo” “geneodoria tou kalou” mostly fit, meaning aperantosini – limitless, afilodokso – without the need for recognition, geneodoria – selfless giving.
In the concept of “waging war” or the idea of, if you use something like “evilness good” it would be an oxymoron. The solution might be the substitution of good with “areti” which is noble charisma and then can use it like “to proterima tis aretis” which is the advantage of having noble trait. I hope it helped a bit.
BTW, the Kapodistrias plan was not enforced properly across the country, therefore became a local and regional nightmare!
I also read the comments you wrote on the amazon website and I don’t think you went too far. I ordered the book because I want to see some of the actual writing and research. Hope you are flood-safe! Hopefully see you in Greece!
Cheers, Alex

[Note: Artemis Leontis in her brilliant book Topographies of Hellenism: Mapping the Homeland, Ithaca and London: Cornell UP 1995, which seeks - 'humbly' - to bridge 'the wide chasm between the dead and the living' (p.13) quotes Cedric H.Whitman on the difference between a classicist and a philhellene being 'chiefly this: . . . a philhellene likes the living Greeks, and a classicist likes the dead ones' The Vitality of the Greek Language and Its Importance Today, New York: The Greek Archdiocese Publication Dept. 1954]

Amidst all the news of communities being overwhelmed by water yesterday, one very significant announcement, from Gordon Brown and the Secretary of State for the Environment, Hilary Benn, was that the Government is setting up an independent inquiry to look at the flood events ... Its report ... may prove a milestone in terms of the British public's appreciation of the reality of climate change. It will doubtless focus on the key problem in terms of flood response ... but it may also take a view of the disaster in terms of global warming, and may well come to the conclusion that we are already witnessing the future. ... In April 1989 Margaret Thatcher ... gave her Cabinet a seminar on global warming at No 10 and one of the speakers was the scientist ... James Lovelock. A reporter asked him ... what would be the first signs of global warming. "Surprises." Asked to explain, he said: "The hurricane of October 1987 was a surprise, wasn't it? There'll be more." The floods of 2007 were a surprise as well ...