My fifth Brompton folder ~ one less car
Originally uploaded by Sibad.
Still the rain. News of three dying from heat in Corfu.

I've got 8000 words of this chapter done and now the hard part, getting it down to 5000. I'm cycling over to my friend and mentor Dr Lesley Prince this afternoon so that she can help me pull together a final version for a deadline on Tuesday.

I got this folding bicycle from Mike at Phoenix Cycles in Battersea Bridge Road, London in 2004. Walked in and bought it and he's looked after it since allowing me enjoyable visits across the Thames past the derelict grandeur of Battersea Power Station.

This valued artefact - a Brompton - is slightly longer than previous models, adding to its versatility - especially in allowing me to stand on the pedals which I found tricky on earlier versions. I've had several Bromptons over the eleven years since I bought my first. One was stolen in Lancieux in Brittany. One, through my negligence, fell under an intercity train in High Barnet and was broken into many pieces. One is in Ano Korakiana. One is in my mother's house in the Highlands - accompanying her recent move - and two, including this one, are in Handsworth. They are the design children of an inspired engineer who, with his team in London, works on them to this day and, within the small niche for folding bicycles, they are probably incomparable.


The bicycle in the picture is beside me as I wait for a train at New Street Station. It is ideal for what transport planners call multi-modal travel. Its low cross bar means walking is an easy choice, since it's so easy to hop on and off and stroll with it in places you might not be able to take a full size bicycle. It also carries lots of weight in a specially tailored pannier that slides on and off a sturdy bracket on the handlebar stem. I attached a large Dutch ding-dong bell for civility in announcing my presence. I carry an antique train whistle on a lanyard around my neck should I need to signal more urgently amid motorised traffic. Now get back to writing, Baddeley! 
Note from Bob McFetridge in Canada:
Simon. This article from today's Globe and Mail makes a bit more reference about the human impact on water patterns globally. I thought it might be of interest to you. "Human activity altering rainfall patterns": Sub-Saharan Africa is getting drier while more rain falls on North America in a global rainfall change that Environment Canada study shows is caused by humans. It has been quite extraordinary watching the news and hearing the interviews with those affected.
Today's study on Climate Change was released here in Canada (published in Nature). The potential impact will be a profound worsening of the human condition in the poorer regions and concomitant gains with more water in the wealthy regions of the world. Although I suspect the UK is not overjoyed about their new found wealth at the moment.
Our west coast has seen considerable rain this summer as well and records are breaking for temperature in the prairies - both consistent measures of CC modelling. Of course the challenge is to understand the difference between inclement weather patterns and actual climatalogical shift.
Some of what I am engaged in at the moment is trying to establish accessible data patterns in biodiversity that will allow monitoring of species changes in the ecosystem - particularly as they affect human health, food and economy.
There is a lot there in fact. The problem is that so much of it is in analog format and therefore hard to trap. Once again, however is the question of what we are actually seeing in a change. On the west coast, in my lifetime since I studied marine biology in the mid 60's, we have seen a number of species populations move as much as few hundred km north. Problem is they are mostly innocuous looking little invertebrates and so not particularly visible in the political landscape.
I watch all that water affecting urban and suburban populations and wonder how and when we will start to rethink our relationship with the landscape and how we plan our future development and protect that which we now have. All the best, Bob 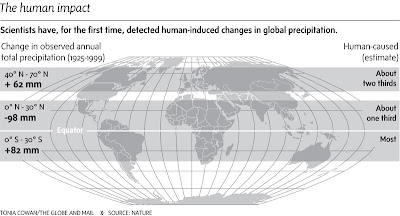 Francis Zwiers is one of the lead authors of the complex study to which Bob has drawn my attention. Zwiers is based at the Canadian Centre for Climate Modelling and Analysis. The article in Nature - the equivalent for climatologists and other scientists as The Lancet for medical researchers - is being mentioned in newspapers around the world at the moment.