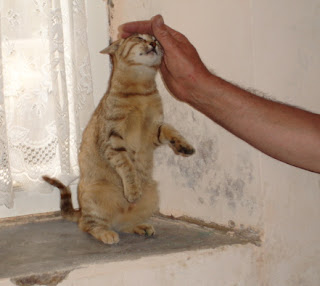 Monday, April 30, 2007
0125. We packed up the boat, had a cheeseburger at CJs and drove up to Ano. The island dotted with lights and the sea sparkling below a waxing moon. We stepped over the threshold and made a cup of tea and coffee after unpacking and putting hotwater bottles in our bed. I had a shower and went upstairs. I can hear Lin tidying in the kitchen and far away muffled barking and what might be a nightjar. The roofers are back in the morning to finish up.
Sunday midday seeing our neighbour sat outside his front door doing a Sudoko puzzle I took him orange juice with ice. A friend said later “Next time try adding a little lemon to the orange. It adds something.” Our neighbours replied to the drink with a heaped plate of olives – small ones from Corfu for making oil and middle and large from a brother in Sparta for eating – as well as oil. 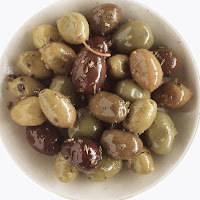 Discarded stones can be cast into the greenery edging our alley. He has a smallholding above the village growing oranges, lemons, garlic, onion, potatoes. Tracing the letters on his palm he said he was 65. “We are the same age. Which month?” “May” “Me March 29. I'm two months older”. This parity was enjoyed and shared with our closest, me to Lin and my neighbour to a daughter, mother, of the small siblings we’ve seen and heard playing in the garden.
* * *
I’ve had an uncomfortable exchange with the builder whose estimate for the roof work was too high. I phoned him because the bedroom sockets don’t work. He wouldn’t discuss it preferring to tell me that I’d made a bad mistake with my our chosen roofers. There was no gainsaying the man. Phones are bad for this kind of exchange. I suggested coming to see him directly but he was unenthusiastic. I found an extension cable so we could have bedside lights.


Saturday, April 28, 2007
Our first water bill was delivered by the shopkeeper yesterday. Work continues on the roof and we’ve accepted a tender to pave part of the garden and remove one of the upstairs walls. “It’ll be done when you’re back!” That seems ages away. 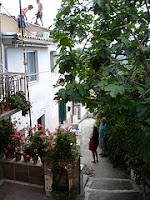 We’ll be going home Tuesday afternoon. Our roofer said “Your roof will done by then.” It was raining this morning, the work secured with a sheet of plastic. Extra tiles, mortar mix, insulation, wax paper were delivered and stacked this morning. We’re thinking we’ve now got a mix of people doing work we can afford and with whom we can keep in touch by e-mail, who trust us enough to cover cash flow delays, and who understand our wishes. After the electrics, the renewing of the kitchen, hall and downstairs bedroom ceilings and the roof comes making one space out of the two front upstairs bedrooms, with the wood stove and flue moved to its eastern wall, and the stairs widened. Then we could have the garden part tiled – over the flattened rubble.
Word of mouth led us to holiday flats in Pyrgi being refurnished. We salvaged a cane sitting room suite with cushions and a low table, drove it home, and lifted it upstairs with a rope over the balcony. 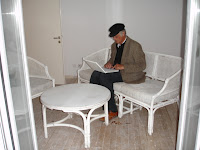