It's raining and grey this morning but it feels lighter. Yesterday the family and some of our neighbours said farewell to Dorothy, my mum-in-law, at Perry Barr Crematorium. Her coffin was a pleasing willow basket with her name on a small tablet of wood. Lin had arranged the flowers to go on top. Guy, my son-in-law - who'd brought our Remembrance poppies - and our son Richard, with two undertakers, drew the coffin up the aisle of the small chapel. Ian gave me directions for starting and stopping the music, closing the curtain at the end and the light on the lectern for what I had to say. 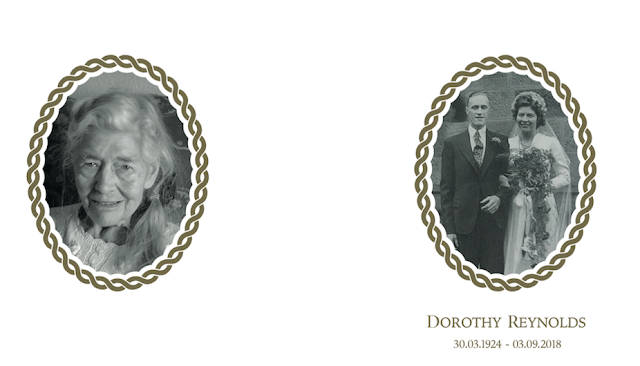 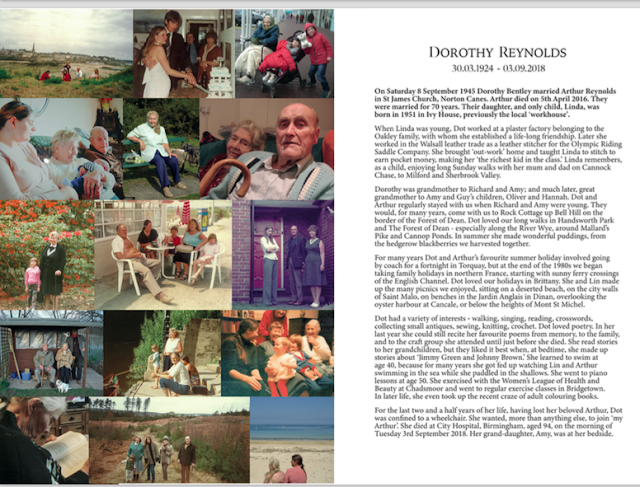 Welcome everyone. It’s good to see enough people who Dorothy knew, but not so many I can’t keep your names in my head - Barbara, Janice, Michaela, Emma, Liz, Amy, Guy, Richard, Les, Gill and John. Thanks to those at Perry Barr Crematorium, David, Paul, and Ian and to Melanie and Angie and colleagues from Hadley’s and to our son Richard for Dot’s service sheet.
Dot’s husband Arthur Reynolds died in April 2016. We were here at his funeral weren’t we? But poor Dot was in hospital and could not be there to say ‘Goodbye’. He and Dorothy had been married for 70 years. Dot longed to join him. She was entirely unfrightened of dying, but, despite being bedridden her strong old body bound her here against her will. Though she rarely complained, Linda who was her chief carer knew her mum hoped that she could go to sleep one night and simply not wake up.
Now Dorothy has her wish, passing away peacefully, with her grand-daughter, Amy, at her side. So she’s not here now with us. She’s gone to where she wanted so much to be - ‘with my Arthur’
It’s said that the memories you have of happiness in childhood stand you in good stead for all later challenges, perhaps most when it comes your turn to die.
I can’t speak for anyone else, but I know Dorothy has left me the most bountiful and indelible of such memories. I suspect that goes for the rest of us – for Linda, for Richard and Amy especially, but also for her sister Barbara.
- I recall being able to hear our children before going to sleep being entertained by Dot’s stories – made up each evening – about Jimmy Green and Johnnie Brown
- I recall being with her as we got our fingers pricked and stained harvesting blackberries along leafy lanes in the Forest of Dean, and later, enjoying her blackberry crumbles with cream and custard.

- I recall Dot’s trifles - full of sherry, You wouldn’t want to drive after one of those!
- Suffering from a breakfastless marriage, I specially recall the delight of Dot’s breakfasts, made for me whenever we were together - her mugs of tea, poached eggs, her bacon and tomato on toast, which she’d sometimes burn at my request.
- I recall many sunny ferry crossings of the English Channel and arriving in France.
- I recall the long and often empty beaches there, where we enjoyed the picnics made up by Dot and Lin - crispy baguettes for us, sliced bread for Arthur.
- I recall strolling around busy markets, quiet churches and country lanes in Brittany. If Arthur, who was no wimp, hadn’t decreed that if we were were meant to fly we’d have wings, Dot would have travelled the whole world with him. Even so I and the family have reaped the happiest memories, of being with her and Arthur in the loveliest parts of England and France.
- I recall that she failed utterly in a mother-in-law’s duty to be at least mildly critical of her son-in-law.
All these memories and more.
Now we chose the great aria from Turandot because Dot and I would enjoy searching the internet for her favourite songs and tunes, one of which was Deanna Durbin singing Nessun Dorma - None shall sleep (a version sung in English in which 'she' has been changed to 'he')


I'll keep a vigil 'til the glow of sunrise when he'll be mine. This everlasting hope for love bereaves the night of silent rest. Oh night depart ere the morrow. Stars on high grow paler … at daybreak he'll be mine … mine at last… at last