We said goodbye to Arthur last Thursday. Linda arranged the time and place and with our approval decided on a wicker coffin. Richard and I, with the funeral people’s bearers, helped carry it into the chapel at Perry Barr. Two candles burned beside it. Lin asked me to pick a mix of bluebells from our garden; blue, gentle pink and white like those she'd picked with him on Cannock Chase. She laid them on her dad's coffin as we arrived for the funeral. Music was chosen by Lin - Tosselli's Serenade sung by Perry Como - a favourite of Dorothy’s; played as we'd sat down. I went to a small lectern:


Welcome - family, John, Leslie, Liz, Emma, Aunt Barbara, her daughter Janis and her daughter Michaela, Ann and John, Sylvia and Trevor.
“It’s a bit black over Bill’s mum’s” - and as Arthur would also say, if we asked him now, ‘Today’s Thursday – all day’. We knew Arthur would leave few instructions in the matter of his death. He said in his will he wanted to be cremated, so apart from that purpose here, we’re making this up as we go along.
I thank the staff here, Pam and Carl, and Melanie and Angela of Thomas Hadley for their professionalism in helping us with this quick farewell. And Richard, my son, for making the Service card. 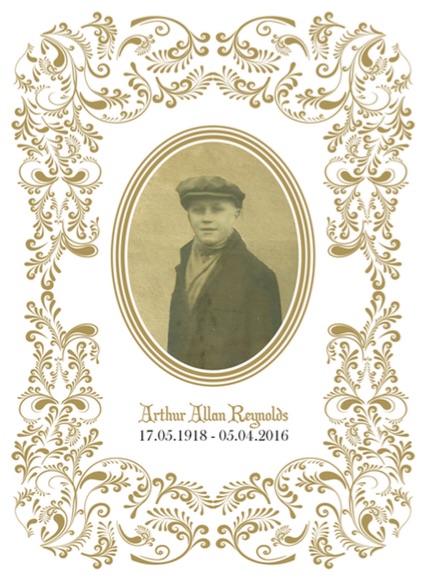 This…is not Arthur, not husband, not Dad nor Grandpa or great Granpa.
These small fragile remains - on which we repose our care and grief – are not Arthur. He’s left us - in the twinkling of an eye. His last words to me “Sorry to be such a nuisance, Simon”.
And Amy said “Gramps, 3 weeks ago we were sat in the carvery listening to the story about you getting drunk and having to be collected from the police station. Last week I saw you in hospital but I don't think you really knew who I was...now you're gone. In some ways I'm thankful that your demise was as swift and unsuffering as it has been. Goodnight Gramps the most hard working, good sense of humoured and loving grandad a girl could have.”
And didn’t Oliver say, in his budding toddler’s knowledge, from which we half hope to protect him, say ‘great grandpa’s a skelington’?
We here may hold a coffin here for a little while, but our Arthur is not his remains.
Even Arthur – for all the precious care and love Dot, his wife of 70 years who cannot be with us, and Linda his beloved daughter, especially, have bestowed on him in these last years – had no time for what lies here.  He might even have said he felt "like a sack o muck tied up ugly".
So don’t remember this as dad, or grandpa or Arthur. What we now say farewell to is a symbol, a means – time-worn, traditional, and valued - for lament, for grief and tears (if Lin will allow those). All things that, in time, should not be any great part - for all our present feelings - of the treasured memories we’ll share, and his knowledge and the indelible codes which Linda, Amy, Richard, Hannah and Oliver carry in their DNA. That goes on.
Let’s say goodbye to him now. Let’s be as sturdy and stoic as Arthur would expect us to be. It’s not his death that matters in the end. It’s his good life we’ll take away from here.

Then I pressed a button I’d been shown by Pam at the Crem, keeping my finger on it as light green curtains closed and everyone stood and the song came again. Then Lin and I led people out
“Thank you Simon” she said ‘that was good”.
I couldn’t have asked for a sweeter compliment
We gathered and chatted a while in the car park then headed for a pub lunch on a long table at Toby’s Carvery. No photos were taken. That felt right.
“You left out my name” said Liz, not annoyed
“You’re family, Liz”
Several said how pleased they were that Arthur's funeral had been so simple.
“You said almost the same at Grandma’s funeral” said Richard
“True. It was what I thought then and what I think now”
“A good cut and paste job” he smiled.
"My life" I thought.
But Lin was child-minding outside the chapel when we said goodbye to my mum in Scotland nearly four years ago. She hadn't heard me speak then. I wanted her approval. It was a good arrangement. 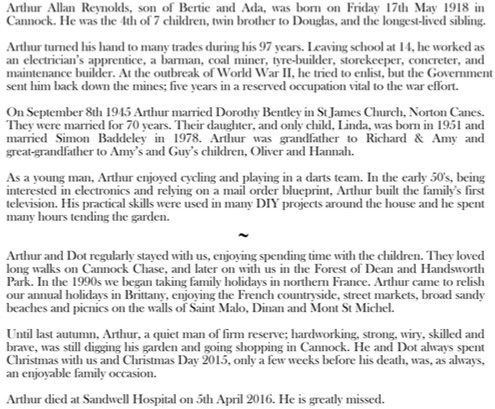 Note: Lin was unsure where Arthur worked as a miner. Only recently we've learned that it was at West Cannock No 5 Colliery that Arthur was employed