What a difference a day makes. Over 24 little hours I stayed up late. Early Tuesday Lin drove me to Digbeth Coach station from where the 777 service got me from Birmingham to Luton Airport by 4.30. After being searched with everyone else, I wandered the familiar concourse, had a coffee and read David Thomas’ Ostland. In rain at dawn I board a plane that flies an almost straight course south-east for 1800 kilometres. In the last minutes of an unturbulent flight I slid from the aisle over two empty seats to peer down on the dark Albanian mountains above Saranda... 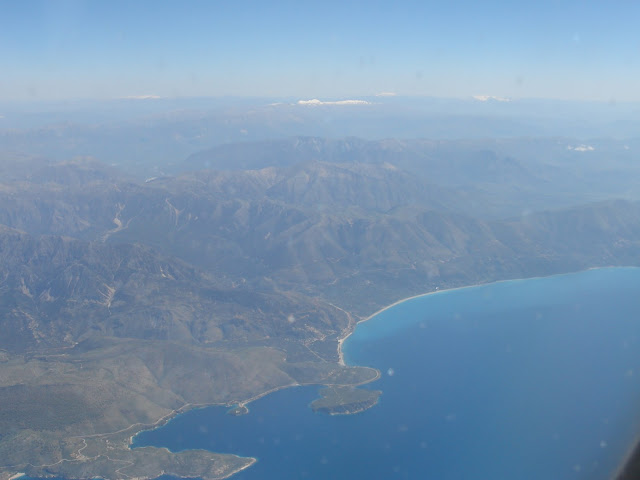 ...merging into Butrint and the gentler heights of mainland Greece, familiar contours, the blue below scratched by an island boat for Igoumenitsa. 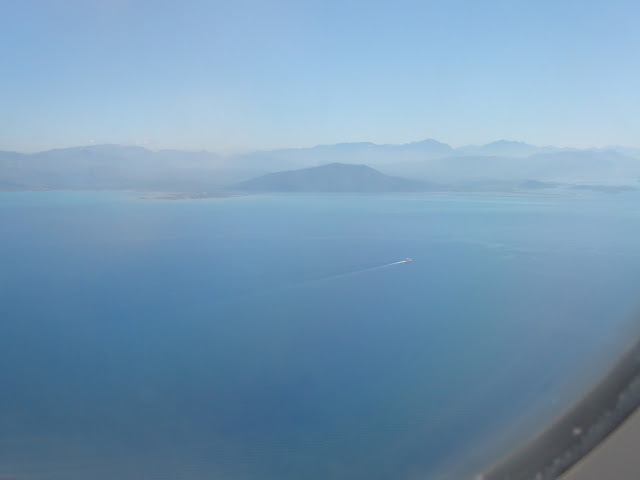 Then a steep curve back on ourselves, for the run in to Kapodistria up the east coast of Corfu, a glimpse of the beautiful Manessi mansion and church, San Stephano... 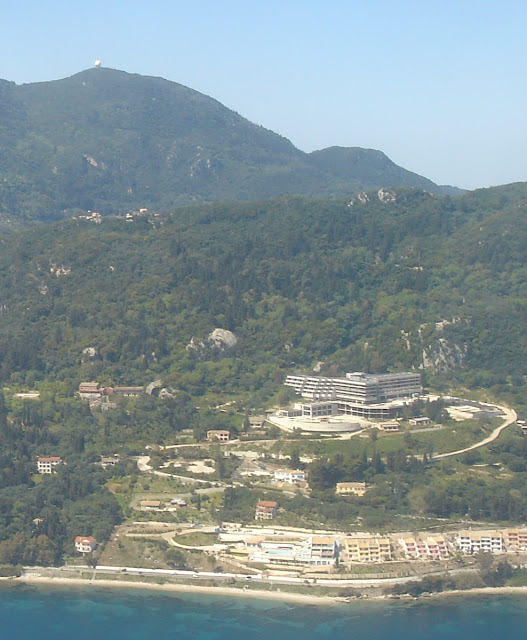 ... hidden by an outcrop of rock from sight of the multi-storied skeleton next door - an hotel offered to a friend years ago for a knock-down price. Meeting the hopeful vendor in different circumstances, my friend reminded him he’d offered to sell 'the unfinished' project at 'a bargain'.
“Not a bargain, my friend, I was trying to sell you a problem!”
In minutes I’m landed, luggage collected, in a hire car driving familiar roads north to the village. The humming seems continuous – coach, airport, plane, car. I stopped at Kaziani to shop for milk and butter and food for the next few days. Then the car’s parked on Democracy Street; my bags unloaded and carried down the 13 steps and into the house. The humming becomes the buzzing of innumerable bees; though I’m reassured the water’s turned on, as, too, the electricity. The fridge hums. Relaxing with the french windows open I read my book sipping a cup of tea. A pair of chattering swallows enter the room, perch for a minute on the chandelier above my head, noisily debating the definition of inside and outside before leaving for outside where two garden trees are weighted with lemons, our orange rich with blossom, and the landscape, olive groves over many gentle slopes, stippled with full blossoming Kokykias trees της κοκυκιάς, with a strip of the bluest sea between me and the hazy shores of mother Greece. 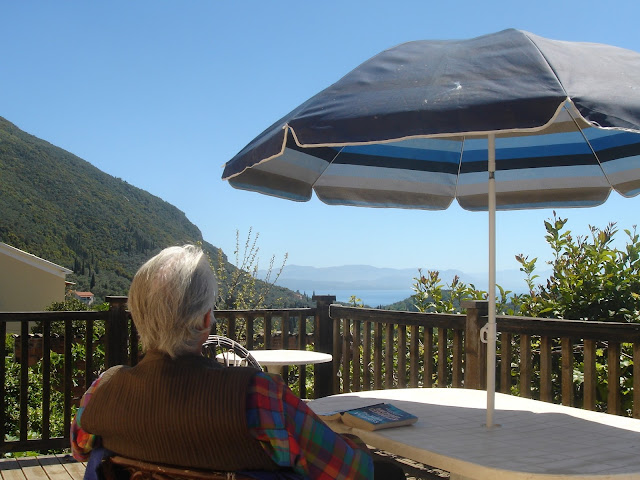 As ever I’m greeted in the street. I explain why I’m here on my own but the news of my father-in-law’s death on 5th April and why Lin has stayed in England is already known; or I hear it being explained to others.
“You must go. I’m looking forward to having the house to myself” said Lin “You’ve got to pay our property tax and submit our no-earnings return to the tax office.”
Next day I meet Eleni P. Parking by the old port I cycle through town to the office of our accountant, off Alexandros Street. Eleni does the paperwork on-line. I must come back to the office early on Thursday to sign at the Corfu Tax Office declaring she represents me.
I find a leather worker in the city centre who mends the metal catch on my Leatherman holster in 30 seconds for €1.50. I buy a needed button, needle, needle-threader and thread from a small shop off San Rocco Square.
In the meantime I’m getting news. Everyone’s getting older. Someone must have an operation; another is most unexpectedly in depression; another has dementia; the toddlers as it seemed when we first came to Ano Korakiana are growing into colts and fillies, quieter with all that’s going on inside, more serious. It's so good to have the Greek double kiss, with a pause between for a warm and unembarrassed hug.
Having ticked a good few ‘to do’ boxes by evening, I took my olive stick with the deer-foot handle, an early gift from Mark, and headed uphill through Venetia and on up the hairpin bends to St Isadoras, the small church on one bend of the zig-zag ascent to Sokraki, over the crags above Ano Korakiana. 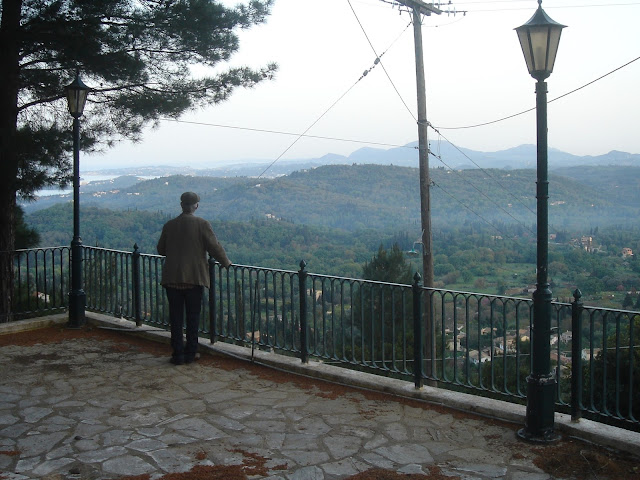 I have the place to myself and am regretting I forgot to bring a candle for Dorothy, my mum-in-law, in the same Sandwell hospital where Arthur passed away and Lin and I arrived minutes after and saw his body and went to pass the news to Dot, a ward away, helped by a doctor called Jeremy.
It wasn’t until, instead of saying “Do you want to see him?' which we all did, I said, instead, ‘Would you like to see Arthur’s body?”
Then she wept. Arthur was 98. He and Dot have been married 70 years. St Isadoras is tiny. I can stand in there, in its dim cool interior but hardly turn in any of its three spaces. A wick burns in oil by a small window. The silence is palpable. It is a serene place, freighted with every kind of sweetness a building can hold; memories too of previous visits alone and with Lin and with the family. I went onto the broad terrace perched on the same rock as the church and gazed over the island’s centre towards the central mountains and the sea and the forts of the city and – a dot – the outline of Pontikonisi beyond Kanoni and the airport where I’d arrived six hours before. I thought I heard womens’ voices coming up the hill; Anna and Angeliki Metallinos – daughter-in-law and grand-daughter of the laic sculptor. I was so delighted to greet them and they me – and in this sacred place, still Tuesday.
I told my news and why I was here alone. Mother and daughter prayed a while and Anna, renewed the floating wick on the oil. So I didn’t need a candle. We walked back down to Ano Korakiana together, Anna collecting from the verges a plant with a light blue flower to make a tea that’s good for the stomach. Above Venetia their car was parked.
“Can we give you a lift?” asked `Angeliki who’d been translating our chat to her mum. She’d been asking me about Arthur and what I would say at his funeral on 5th May.
** **** **** **
On my second night in the house I awoke with a stomach ache and nausea. Going downstairs I was sick several times. I returned to bed and tried to sleep but after an hour I had to go downstairs again to be sick again. I have always been so healthy, it always surprises me to be weakened by a sudden illness. I suspect I ate too much of my own cooking the night before while watching Bridge of Spies. I’d promised to go into town to the tax office in the morning. Getting myself up, I thought of what happens to Superman when he comes into contact with that toxic mineral from his home planet. My folding bicycle suddenly weighed so much. Every step was draining. I was thirsty without wanting much to drink, just a sip to wet my lips and mouth. Dehydrated. Having parked and cycled into Alexandros I made the excuse to Eleni that I’d had too much to drink the night before. Her colleague Georgia walked me to the tax office, stopping now and then to make sure I was keeping up, as I would do, slightly frustrated with Arthur, in his last months. She found me a seat for the hour long wait in the grey beige corridor of Corfu bureaucracy, as like a vigorous West End comedy, people exited and entered left, right and centre, in and out and back and forth between different doors, some employees, some clients, with no sense of a queue or sequence, but all polite. Georgia chatted cheerfully to people she knew. I tried to snooze and over and over licked my lips; a fool, I’d not bought a small bottle of water to sip. At last the business was done, and I had a signed and stamped piece of paper. I coasted downhill on Theotoki stopping to enjoy a strawberry sorbet and sip more water.

Back at Democracy Street where, like a lizard, instead of shifting clothes, I shuffled carefully between places to relax that were neither too cool nor too hot; the balcony under an umbrella, the sitting room near a window, our bedroom, getting into to bed at dusk, waking up and shifting to night clothes around midnight, and, no longer thirsty, sleeping through to five in the morning when I felt up to a mug of tea and two slices of buttered toast, sensing strength recovering. By morning proper I was having a shower, doing a load of washing that would dry swiftly in a warm breeze from the east, starting to tidy the garden, clipping back the bougainvillea and other spreading greenery, hanging a tarp beneath the balcony to protect the veranda from rain; phoning Dave to get Summersong craned from her berth so she can be scrubbed and anti-fouled and put back in the water for when the family come in a week – but without Lin I fear.  She’s caring for Dorothy, her bereaved mum.