From here to Perros-Guirec where we headed this morning to catch a sight of the famous pink granite the long showers drove in from the sea. If I can be outdoors in the right wear I like this weather as much as any, but Lin was a younger version of Giles’ gran in the rain – all in black, damp and pleasurably morose. We picnic’d in the car by a jetty at Grande isle, near Trébeurden, where we’d found a boulangerie open over lunch. I said small bakers were gone, but skeuomorphs survive as breadshops by having bread delivered each day from a regional bread oven, and selling patisserie, crêpes and chocolate and sometimes serving tea and coffee.

Dot and Arthur ever cheerful spoke now and then of ‘a break in the cloud’. It never came until we headed home and found roads beyond Morlaix quite dry. ‘I said we should have gone west’ grumbled Lin. By 5.00pm the sun’s shining brightly through the clouds. Dot’s well into on ‘Bleak House’. Lin’s nearly finished ‘Eleni’ and Arthur’s snoozing. I’m enjoying Robert Wilson’s ‘Hidden Assassins’ but I’ll go into Pol in a moment and use the WiFi and get some washing liquid. Durrell doesn’t go into details of the washing but the other humans in his households – not just select guests – are always in his plots, enjoined to conversation, questioned, listened to, teased, seduced, charmed; part of his enduring curiosity.

Yesterday was sunny. I suggested the dunes at Ker Emma – thirteen miles west. On the way I held to my opinion that there were no more ‘locals’ in the new Brittany. Lin, normally contrarian, agreed, then Dot said ‘There’s one’ and pointed to a silver haired dame on a sit-up-and-beg bicycle with a shopping basket on her handlebars peddling south in the traffic. ‘They have hundreds of these paid extras working for the tourist authority. There’ll be a priest along in a moment’ but the relaxed gendarme guiding traffic at the crossroads in St.Pol was dressed in a forage cap and light blue overalls – the new Brittany police working in partnership with the other Agences des Secours attending courses of the kind I run at home. A suitable extra would have come straight from ‘Maigret’ in dark blue with cape and kepi. 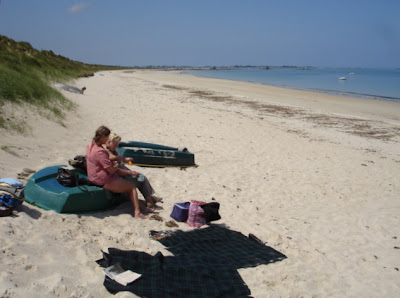 We found a spot on soft sand by two upturned dinghies where we could survey a crowdless beach, while enjoying Dot’s picnic. The horizon was hazed and bare; the traffic of the times rumbling above marking their passage with contrails that weft and warped into a diffuse weave of high cirrus.

Later, continental school time, brought a few parents with children and romping dogs to enjoy the strand. ‘It’s no good’ I said, playing to my misanthropy, ‘there are ten people within a mile of us!’. By the shore an oldish couple fished in the pale blue shallows, reeling in clumps of seaweed at intervals and chatting now and then. After she’d landed a reasonable flatfish they left.

We drove back to the old port at Roscoff, where crabs were being sold from a boat and dropped into plastic bags for a cluster of customers on the quay. At home I boiled an artichoke. ‘OK’ said Lin who’d melted my butter ‘but not special. It needs more cooking’. While the rest played cards I cycled to St.Pol de Leon, oriented this time by a bright setting sun and the Kreisker Tower. The WiFi at Hotel de France, where I had a coffee and cognac, revealed, via the BBC, a forecast of rain and cloud.

Perhaps, like the crowds, politics has gone somewhere else. ‘Youth bulge’, territorial injustice, global interpenetration of populations and their ideologies means war is diffusely retailed from conspicuous and distracting hotspots. Do atrocious things with bombs to most populations and instead of turning on each other as the theory of terrorism claims we should, something else happens. I’m not sure what, but it’s as if a heating pot just won’t boil over like unwatched milk. Some of ingredients for repeating history – only worse – seem present but it’s as though we’ve seen so far into the heart of our own darkness in the last hundred years, and taught so many of our children what’s there, that we are now enjoying the equivalent of vaccination against the pox of war. Academic research into the roots of war and the means of peace may even have had an effect. Perhaps the recipe needs a spice more charisma or a big dollop of unemployment and perhaps my words could sound like that sentence at the end of the confident 1911 Encyclopaedia Britannica entry on 'anti-semitism' which suggests that the worst of this pathological social phenomenon is now past.

What would happen if there was a collapse of our economy is another matter - immunisation thwarted by virulent strains of resistant virus. Violence, including self-harm, is rampant in the homes and streets of prosperous economies, but it’s difficult, for those who’d like this, to spread it beyond localised gangs into wider collective aggression. What spreads on the web doesn’t easily download to the street – notwithstanding the radio DJ-spread phone-in rumours that helped ignite the short burst of violence in Lozells in 2005. There seem to be forgivers around – among people with every cause to be unforgiving, as well as those ready to apologise for historical wrongs. People demonstrate for conciliation carrying billboards that say PACE, hanging rainbow flags from balconies. We are earnestly concerned about domestic violence. We try hard to stop bullying at school and work – striving to understand its causes. The penetration of the state is strong, - CCTV, ID, DNA - its intelligence improving, but this penetration is not unpopular.

Alertness to state incursion may be paranoia and may not be. Look at me. I’m a friend in court to a bookseller, Lindsay H., arrested for showing a poster in his window saying ‘Death to the Invader’ and I’m to be a friend at a disciplinary panel to an interpreter accused of unprofessional behaviour in a case involving the Serious Organised Crime Agency. I report local cases of possible criminality to an e-mail network that has effectively substituted for Neighbourhood Watch and my daughter hopes to join the Police. In my professional life I earn money aiding a culture of coordination between the police and the fire and rescue services – one of whose senior managers told me a couple of years ago, before the tube atrocities, that his agency was effectively on ‘war alert’. My friend Lindsay sees this co-ordination as the new face of emergent fascism. He says, in the kindest way, that I’m one of their useful idiots.
Posted by sibadd